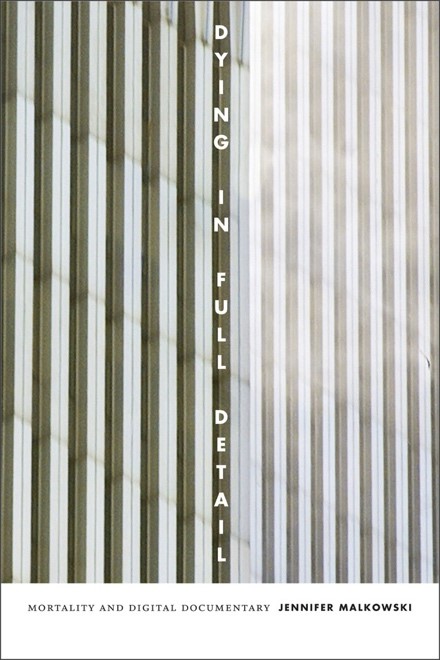 The year is 2010. The Internet has already cemented itself as the primary platform for journalism, Instagram is making its first steps into the world, and social media are becoming increasingly more prevalent in everyday life. It is also the year in which communications scholar Barbie Zelizer published her now classic image critique About to Die, in which she lays out the long-standing fascination with depicting the nearly-dead in visual journalism. The about-to-die-image, Zelizer describes, “represents a range of ambiguous, difficult, and contested public events, which are shown by depicting individuals facing their impending death.”[1] A hugely topical publication for its time, the death-centered gazes and fetishisms that Zelizer lays out in About to Die play into the rise of individual death as a globally shared experience, facilitated by social media’s normalization of the credo that all that is private, is public.

Jennifer Malkowski’s Dying in Full Detail: Mortality and Digital Documentary delves further into the discursive world that Zelizer opened the decade before, and does so with expert thoroughness and care. Malkowski’s particular object of focus is the documentary film, a medium in which death, as the book’s jacket describes, serves as “one of the greatest taboos.” Yet Malkowski tackles the questions surrounding death and its digital depiction (as video, as online image) with theoretical precision as well as empathy, presenting death not as dark spectacle but as a social practice rooted in the politics of the human body. Dying in Full Detail speaks of war bodies, sick bodies, racialized bodies, bodies of which the deaths cannot be witnessed as a politically neutral practice. These witnessings are disturbing as well as urgent. Malkowski writes:

And so, Dying in Full Detail puts forward, there is a vital responsibility to the witnessing of death from a distance, to see a death happen in all its colors and complexities, in that the aesthetic and ethical circumstances under which these deaths are captured are highly politicized.

Malkowski’s book speaks of online shock sites, the Black Lives Matter movement, the Golden Gate Bridge suicides, as well as deathbed documentaries of the terminally ill, among a vast array of other case studies. Chapter One, “Capturing the ‘Moment’,” analyzes the depiction of death in pre-Internet photography and film. The second chapter, “The Art of Dying, On Video” focuses on the deathbed documentary in particular, and Chapter Three, “A Negative Pleasure,” details the suicides that have been captured on digital video in recent history, such as the fatal jumps from the Golden Gate Bridge that are recorded by the area’s security cameras each year. The last chapter, “Streaming Death,” is by far the most contemporary, and zooms in on the deaths that are uploaded to YouTube as shareable videos, and rapidly disseminated on the web as a result.

Malkowski analyzes not only the particularities of what happens in these documentations, but also the role of the gaze and the virtual presence of an (otherwise) absent viewer in these contexts. “The cheap and easy chain of digital production, distribution, and exhibition has allowed an unprecedented amount of documentary footage to reach the public,” Malkowski writes.[3] This amount is evident from the sheer range of case studies that Malkowski discusses in their study, but also from the popularity of death documentation as a topic of research in recent years: Dying in Full Detail is situated in a lively conversation on death and its visual documentation, that is likewise joined by Margaret Schwartz’s Dead Matter (2015),[4] Christopher M. Moreman and A. Davis Lewis’s Digital Death (2014),[5] and, most recently, Nathan Jurgenson’s The Social Photo (2019).[6]

But Malkowski’s text distinguishes itself by its sociopolitical outlook on death documentary, considering not a single but a multitude of corporeal layers within the medium. Elegantly oscillating between the theorizing of André Bazin and Elisabeth Kübler-Ross, and between Hollywood and YouTube, Dying in Full Detail demonstrates the variety in lenses through which death can be seen, and experienced, in action. Class, race, sex, and health all play a role here, and Malkowski ensures a constant acknowledgment of this in their work. For each object, be it the sick body of Bob Flanagan or that of Eric Garner being murdered by police, Malkowski lays out the embodied circumstances of who is doing the dying, and who is doing the watching. This way, Dying in Full Detail accurately points out the ethical tensions that play when a death is captured, or not captured, as a form of media entertainment – be it informative, or sensational.

Dying in Full Detail offers a compelling overview of the ways in which death is looked at, or has been looked at, in contemporary visual culture, and how these ways of looking correspond to the shifts of intimacy engendered by new media practices. The book could have benefited from an additional chapter that lays out how images of death were shared in the pre-moving image era, and what remnants of this era (in terms of custom or style) were carried over to the video age. Similarly, a discussion of death depictions in media even newer than YouTube, such as Instagram and Snapchat, would have been a helpful addition to complete the book’s object timeline. Still, the book offers a helpful chronology from the moment of death as a “still” image in traditional media, cemented and frozen in time, to the “art” of death as a moving image practice in video and, more recently, on online streaming platforms. Sharp and elegant, Malkowski approaches the topic of death in a respectful, non-sensationalist way, while not shying away from emphasizing how close, exactly, today’s cameras dare to get.

Nadia de Vries MA is a PhD candidate at the Amsterdam School for Cultural Analysis (ASCA), University of Amsterdam. Her research focuses on the representation of the human corpse in virtual spaces. She is also a poet and essayist, and writes in both English and Dutch.