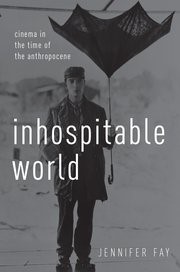 Early in Inhospitable World, Jennifer Fay argues that the “central conundrum” of the Anthropocene is that “our collective efforts to make the planet more welcoming, secure, and productive for human flourishing, especially in the twentieth and twenty-first centuries, are precisely the measures that have made it a less hospitable earth, transforming it from something given into a disaster we have made.”[1] It is through this conundrum that Fay draws nuanced connections between the anthropogenic world-building of our environment and the world-building conducted to create cinema and other media, arguing that “cinema’s dominant mode of aesthetic world-making is often at odds with the very real human world it is meant to simulate.”[2] The book’s disparate, yet fully-realized chapters further strengthen the tendrils that bind the theories of the Anthropocene to those of cinema and media studies, illuminating them through objects of study spanning genres, eras, countries, and materialities. While seemingly incongruous, these objects interconnect through the analogy central to Fay’s argument: that the Anthropocene is to natural science as cinema is to human culture. Both the Anthropocene and cinema grew from the Industrial Revolution. Both also anthropogenically mask the mediums in which they are made.

In the first chapter, Fay applies this theory through her approach to the slapstick comedies of Buster Keaton from an environmental perspective. In an era when soundstage design was the norm, Keaton’s films—such as Steamboat Bill, Jr. (1921)—defied this convention and created weather on location to aid in the comic destruction of props and sets. Fay suggests that “these experiments in manufactured weather were not produced with a consciousness of global warming or the planetary force of human enterprise. Yet they tap into an interwar awareness that ‘natural’ disasters were often attributable to industry and war, that ‘nature’ was already a product of culture.”[3] Building upon this sentiment of manmade disaster, the second chapter moves from Hollywood’s destruction-by-design to an examination of post-World War II atomic test films shot by the U.S. government at the Nevada Testing Site for scientific and military purposes. Similar to Keaton’s work, Fay contends that these films translate an “unpredictable anthropogenic environment into an aesthetic—and at times even anesthetic—form.”[4]

From the outward expression of anthropogenic antagonism in the form of nuclear weapon testing, Fay then moves toward more inward expressions of it. Chapter three turns to film noir in mid-20th century America; a genre set, and arguably mired, in the human-built environment. This genre—one that Fay argues is “devoted to the pedagogy of death”[5]—evokes the existential pessimism of the Anthropocene without ever succumbing to nihilism, or as Fay suggests, “the good life, noir tells us over and over again, does not open up a future; it forecloses it.”[6]

Shifting dramatically in geography and genre, the fourth chapter explores artistic responses to the environmental and societal catastrophes incurred by the creation of the Three Gorges Dam in China. The dam, implemented as a response to the impending climate crisis, led to forced displacements of those living near the construction. These consequences are seen in Still Life (2006), a film by Jia Zhangke, and in the paintings of Liu Xiodong and the photographs of Yang Yi, works that Fay uses to “approach the relationship between [the] politics and aesthetics of hospitality.”[7] In the book’s final chapter, Fay shifts focus once more—moving this time to Antarctica, a continent seen in modern times as vulnerable to climate change despite centuries of being viewed as unalterable and alien, and places early polar visual media in conversation with Siegfried Kracauer’s theories on film after Auschwitz.

While film and media scholars will find value in the connections made in this book that further draws discussions on the Anthropocene into the scope of the humanities, the book’s relationship with environmental design and human-environment interaction may also appeal to scholars in the fields of environmental studies and urban studies as well. It is this interaction—or rather the folly of hierarchy in this interaction—that the book presents, explores, and ultimately warns against. However, due to the scope of materials studied and ambitious application of interdisciplinary theory, some may find it difficult to find a common through line that clearly articulates the more nuanced points of Fay’s argument across each chapter. This does not diminish the fact that Fay’s analysis of texts ranging from the films of Buster Keaton to the continent of Antarctica are fully-formed and insightful, ultimately leading many readers to agree with her view that “if, in the image, humanity enjoys no necessary priority over other animate and inanimate matter, by what right do we humans claim possession of the world and submit the planet to our designs?”[8] This presents a dire question as moving images continue forward in their second century, a century during which we may continue to reap the consequences of a designed planet.

Phillip D. Duncan is a doctoral candidate in media studies at the University of Oregon’s School of Journalism and Communication. His dissertation focuses on the production and exhibition of nature documentaries in the 1920s.