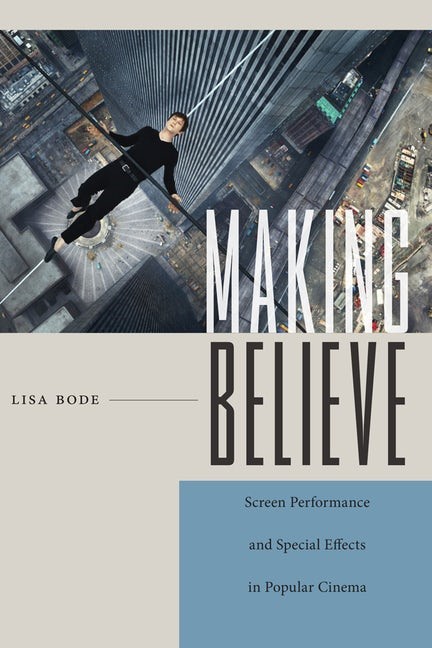 Stephen Prince in his 2012 study argues that “the enduring cultural practice of placing viewers into immersive, virtual spaces came naturally to cinema, with its ability to provide moving images and to combine pictures with sound.”[1] This is true for popular film which provides audiences an immersive illusion which is perceived as an experience rather than a representation. As the title indicates, Making Believe attempts to conceptualize and historicize the illusionistic space that evolves from the intricate intersection of on-set special effects and onscreen acting in the production and reception of popular cinema. It is rich with detailed, confident scholarship. The scope of this book encompasses the interpretation of screen performance and illusion and visual trickery throughout the silent, sound, and ongoing CGI age, with a specific focus on early US cinema, the Hollywood studio system, and internationally distributed blockbusters from contemporary Hollywood conglomerates. The above analysis is underpinned by a large amount of archival film industry materials like Anglophone handbooks on actor training, film critiques, and interviews in print, which give the reader an intuitive sense of the historical evolvement. Bode’s main argument is that “acting values such as expressivity, mimesis, versatility, proteanism, presence, embodiment, and authenticity have been rearticulated and accrued different kinds of meaning within the historical tensions, debates, uncertainties, and shifting boundaries of technological artifice in filmmaking.”[2]

Of the six chapters, the author employs a thematic instead of sequential path. The first chapter analyzes the motion capture technique which arises in the context of the interplay between the advancement of recording technologies and onscreen performance. Historically speaking, acting for performance capture bears enlightening similarities with on-camera acting that shaped silent film and sound film performance. Motion capture covers up the actor’s appearance and visibility. Regarding this, Bode proposes two plausible approaches to solve the above issue. One is to “cast an actor with a recognizable idiosyncratic repertoire of expressions.” It is exemplified by the performance style of Mark Rylance and Jim Carrey in The BFG (2016) and A Christmas Carol (2009) respectively, which make motion-capture acting visible. The other is to rebuild acting for performance capture as a performance beneath from rubber and paint to digital makeup.

The second chapter examines onscreen acting behind prosthetic makeup. Taking the instances of Lon Chaney’s transfiguring performance in the early 1920s, Bode observes that the separation of makeup from acting in the silent period led to the division of labor where the makeup artists and actors were responsible for the character’s exterior and interior respectively. Decades later, John Hurt’s Oscar-nominated role in The Elephant Man (1980) witnessed the cooperation between actors and makeup artists in order to orchestrate a consolidated character body. Bode summarizes two main divergences between performance capture and acting behind prosthetic makeup. The first is the liberation versus constriction in actor autonomy; the second is “the location of the performance of the communication of interiority in relation to the exteriority of the artificial body and face.”[3] The above analysis is buttressed by the comparisons between Chaney and Hunt’s acting beneath prosthetic faces and Andy Serkis’s facial capture performance in Rise of the Planet of the Apes (2011) as chimpanzee Caesar.

Chapter 3 still reviews motion capture and other approaches of reconstructing the shape and outward appearance of the actor. Some have argued that the emergence of the above-mentioned techniques forebodes the end of typecasting. This is due to the fact that the actor’s social and bodily characteristics are to some extent now rendered insignificant for role assignment. However, after analyzing White actors’ (Hugh Grant, Hugo Weaving, etc.) thankless “yellowface” makeup roles in Cloud Atlas (2011) and the character Lupita Nyong’o played in Star Wars VII (2015) using performance capture, the author argues that the end of typecasting is still utopian. In Chapter 4, Bode turns her attention to the visibility and illusionism of stunt, dance, voice, and other types of doubles in popular cinema by discussing the function of performance substitution from historical, visual, moral and aesthetical perspectives. This section attempts to examine how and to what extent the practice of using a double has reshaped our expectation of actors as performing artists. In doing so, the author considers the screen performance of the film star and his/her double(s) as interdependent now, as they work and train together to “synchronize gesture, action, charisma, and character psychology...instead of the double doing the work while the lazy star takes applause.”[4]

An actor appearing as two or more characters simultaneously used to be quite common in American popular films, which is the main focus of Chapter 5. Reviewing publicity materials, interviews and commentaries published in the 1910s and early 1920s, Bode considers the versatility (double or multiple role) as a noteworthy benefit in the hierarchy of onscreen acting techniques. The gradual marginalization of the practice of a single actor playing multiple roles also reveals evolutions in mainstream acting discourses from the silent to the digital age. Chapter 6 analyzes how and to what extent acting in virtualized environments (greenscreen, bluescreen and digital compositing) has disorientated actors and enchanted viewers in films like Star Wars: The Force Awakens (2015). Taking the instance of Joseph Gordon-Levitt as Petit in The Walk (2015), this chapter then examines how an actor responds realistically to imaginary circumstances. Bode argues that “in an era of increasingly sophisticated integration of live action and digital elements and sensory immersive cinematic experiences, actors are considered not just graphic elements but conduits for presence, key to the corporeal authentication of the illusion.”[5] The book’s conclusion also mentions recent discourses revolving around the interplay of special effects and onscreen acting in Bollywood and Chinese blockbusters like the significance of the first performance capture fantasy epic Kochadaiiyaan-The Legend (2014) in the history of Bollywood cinema and Jackie Chan’s stardom which features the consistent physicality of actual fighting and acrobatics.

Making Believe expands our understanding of the developmental history of screen acting practice by analyzing the intricate interplay between human performer and digital/non-digital production techniques in various time periods. It will appeal to moving image scholars and students whose research interests include American popular culture studies, new media and technology studies and studies on performing arts. It will also be of value to Anglophone film historians working in different chronological contexts as well as scholars working in the increasingly active field of special effects and star/celebrity studies. However, the scope of this book is limited to Anglophone popular cinema while largely ignoring its counterparts produced in different film-making cultures besides some discussion about Bollywood and Chinese blockbusters in the conclusion. Thus, at the global level, screen performance and special effects in popular cinema is an area worthy of further study and investigation.

Dr. Shaopeng Chen is a lecturer in School of Arts, Southeast University (China). He received his PhD degree in Film Studies from University of Southampton (UK). Previously, He taught animation production courses at Nanjing Normal University of Special Education. He has published articles on acting for animation, characterization of animated characters, general aesthetics in animation, film marketing in China and Chinese animation industry.

This work was supported by the [The Fundamental Research Funds for the Central Universities of China] under Grant [number 2242019S20044].