Throughout the history of American war cinema, the United States flag has commonly been used a signifier of the nation’s ideals. From Tearing Down the Spanish Flag (1898), directed by Stuart Blackman and Albert E. Smith to Steven Spielberg’s Saving Private Ryan (1998), the flag has appeared as a ghostly apparition, inviting the viewer to meditate on the contrast between the horrors of war and the national values for which that war is being fought. But whilst most war films are inclined to suggest a definitive conclusion – that the costs of a war were or were not worth the sacrifice – Clint Eastwood’s Flags of our Fathers leaves this question unanswered.

Theatrical trailer for Flags of Our Fathers

Based on the book of the same name by James Bradley, Flags covers the experiences of his father, John Bradley, and two other soldiers, Rene Gagnon and Ira Hayes, who appeared in the photo, "Raising of the Flag on Iwo Jima," taken by Joe Rosenthal during the infamously bloody Battle of Iwo Jima. These three men were lucky enough to survive long enough after the taking of the photograph for it to become a media phenomenon, prompting the military to pull them from the front line to tour the United States as heroes for the Seventh War Loan Drive, which raised a staggering $26.3 billion for the war effort.[1] 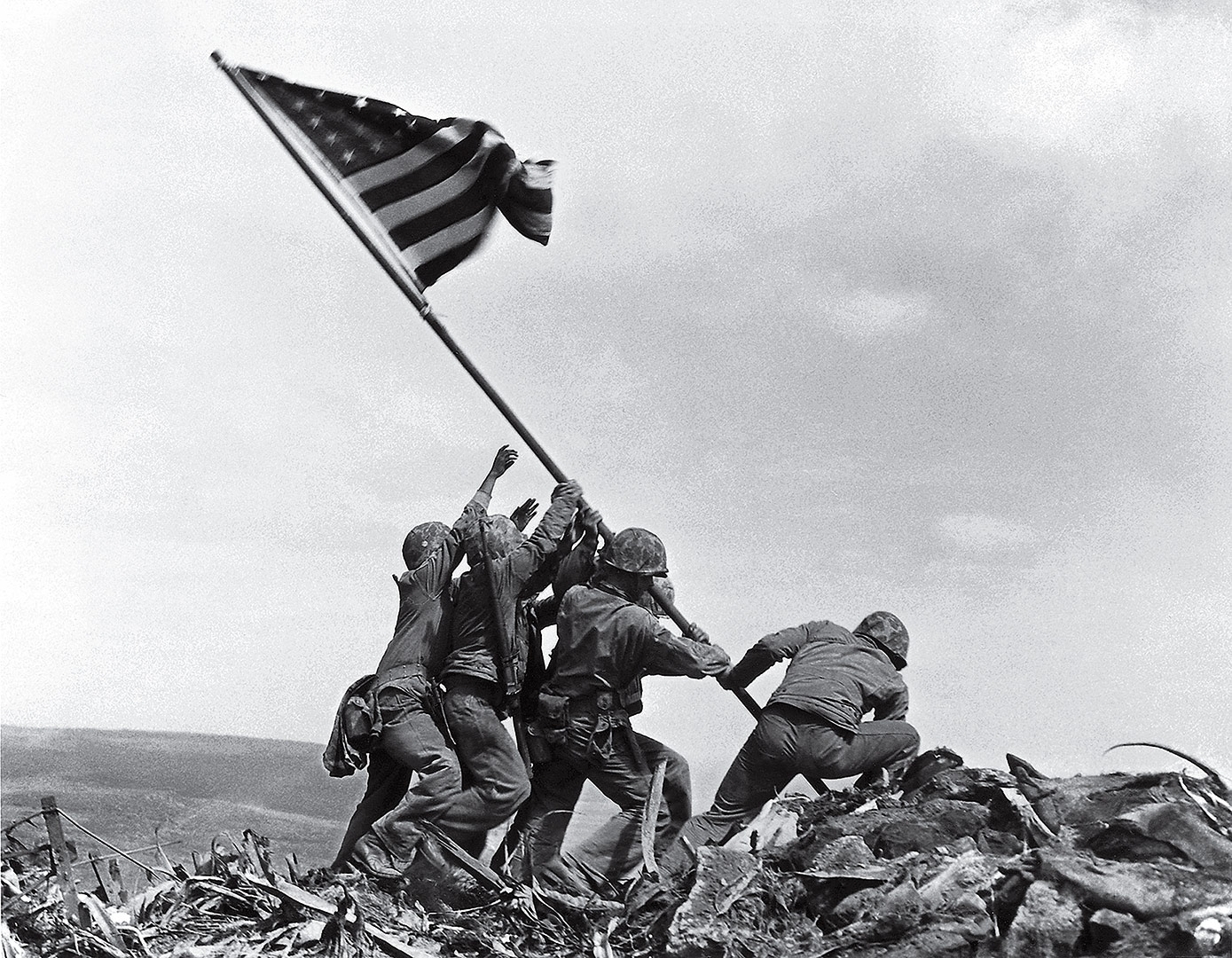 Figure #1: "Raising of the Flag on Iwo Jima," a photograph by Joe Rosenthal.

This result was quite incredible, but Eastwood’s film invites a more sophisticated reflection on history by juxtaposing this outcome with a narrative that reveals the cynical political engineering it took to conceal the image’s less-grandiose origins in order to elevate it to the status of myth. By further contrasting this with the experiences of the three traumatised soldiers and the discomfort of their new propaganda status as flag-raising heroes, an absurd act to call out as heroic within the broader context of war, Eastwood explores a jarring conflict between historical truth and the mythmaking propaganda required to power the military efforts of World War II. 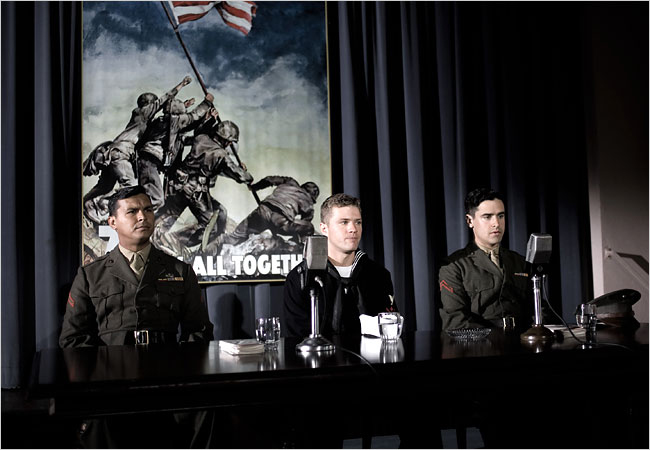 At the center of the film lies the immutable power of that almost universally recognised photo, "Raising of the Flag on Iwo Jima." For most people, it is an undeniably visceral image, encapsulating notions of strength, integrity, and triumph over adversity. The image’s power derives from the soldiers' struggle beneath the flag, literally straining to uphold everything it represents.

At the time that the image appeared, the United States was three years into the war and impatient for an end. The image functioned as a symbolic reminder of what was being fought for, and an attempt to reignite a sense of national pride and purpose. As Holger Potzsch notes in "Beyond Mimesis: War, Memory and History in Eastwood’s Flags of Our Fathers," Eastwood’s film in many ways recognises that the image functions as myth and matters not for “its objectivity or historical accuracy but its capacity to simplify complicated issues, to engage and motivate.” [2]

Eastwood challenges this mythic status by drip-feeding a series of revelations throughout the film about the photograph’s construction. First, it is revealed that the famous photo actually depicts the second raising of the flag at Iwo Jima. When the Secretary of the Navy, James Forrestal, came ashore to observe the taking of Mount Suribachi, he requested that the original flag be replaced and brought to him as a souvenir. The image’s status as an authentic representation of a past event is fundamentally challenged here, especially given the completely different cast of characters visible in the two photos, which ultimately leads to the misidentification of an individual in the photo.

Figure #3: The Battle of Iwo Jima as depicted in Flags of Our Fathers.

As if this weren’t enough of a challenge to the photograph’s historical legitimacy, one exchange in the the film highlights the fact that not only has a soldier been misidentified, and not only was this not the original flag raising, but also that the image does not capture a moment of victory at all, but only the minor milestone of reaching the peak of Mount Suribachi, which held some strategic value to the campaign.[3] Ira Hayes and John Bradley attempt to explain the situation to Bud Gerber of the Treasury Department, who has been tasked with raising funds through the war bond drive:

Bud Gerber: Six guys raising a flag over Iwo Jima. Victory is ours. You're three of them, right?

John "Doc" Bradley: This was the fifth day, sir. The battle went on for thirty-five more.

Bud Gerber: Well, what'd you do, raise a goddamn flag every time you stopped for lunch?

As these revelations all surface throughout the film, the value of the photograph as an authentic object begins to dissipate. As Robert Burgoyne notes in his essay "Haunting the War Film: Flags of our Fathers," the photograph itself “haunts” Eastwood’s film and the men who appeared in it, arguing that “far from recording a searing moment of surpassing heroism, the photograph itself is a kind of double, almost an afterimage or an afterthought, a ‘second take.’”[4]

The strange doubleness that issues from the photograph - two flags, two images, two different teams of flag raisers - pushes the phantasmic quality of photography to the surface of the text. The photograph of the second flag raising, apparently grounded in the real and taken under combat conditions, is nevertheless riddled with uncertainty and doubt; it immediately takes on the unreal aspect of the replica: rather than a recording of a punctual moment in time, it becomes a kind of hollow monument.[5]

Juxtaposed with the unreality of the hero construction involved in the flag-raising photograph is the imposter syndrome that overwhelms Gagnon, Bradley and Hayes as they are celebrated as heroes. Early on in the film, as Gagnon is sent home on a plane to join the bond tour, another soldier is kicked off the flight so Gagnon can have his seat. The soldier angrily says to Gagnon, “If I’m gonna get kicked off my seat for a hero, he better have a damn good story to tell.” Gagnon is uncomfortable at the assertion, and can only answer in the negative.

In their speeches on the tour, Gagnon and Bradley both feel compelled to point out that the real heroes are those who will never return home. Ira Hayes, tormented by memories of lost friends and a profound guilt over his own participation in the horrors of war, breaks down as he explains, “I can’t take them calling me a hero. All I did was try not to get shot.” As one character notes: “All your friends dying, it's hard enough to be called a hero for saving somebody's life. But for putting up a pole?”

The unique position of the flag-raisers allows Eastwood to demonstrate a significant point quite succinctly. By highlighting the manner in which these three men are held captive by a disingenuous public relations machine that seeks to propagate a misleading narrative of heroism, Eastwood places an emphasis on the way in which human lives are ultimately swallowed up and consumed by the patriotic myths pushed by government and its machinations. As Mikkel Bruun Zangenberg notes in "East of Eastwood: Iwo Jima and the Japanese Context," the film works to highlight the “contrast between the regular and authentic soldiers and the cynical politicians,” with the former being “primarily concerned with survival and comradeship among themselves” but finding themselves “trapped in a narrative of the primacy of patriotism, honour, and fate.”[6]

Eastwood does not question the purpose of sacrifice in the context of this war, but instead interrogates the myth of the hero as a propaganda tool. Eastwood is inviting a meditation on a causal factor of war in general, the willingness of politicians to sacrifice human lives for a cause. The struggles of Eastwood’s heroes pale in the larger saga of the war. Much greater losses had been suffered by so many more.

James Curnow is a Ph.D. candidate at Monash University, with a strong interest in historiography in cinema. His thesis focuses on representations of history in the films of Clint Eastwood.