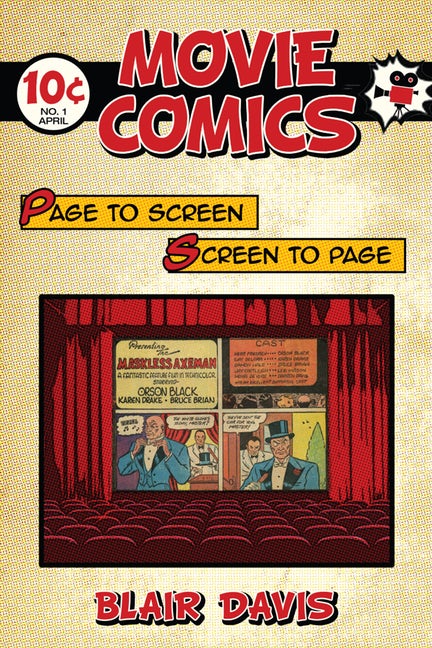 The synergistic, transmedia storytelling practices of comic book publishers and film studios currently are of great significance, particularly in the midst of Marvel’s decade-long dominance of the box office. However, as Blair Davis’s Movie Comics: Page to Screen, Screen to Page elucidates, a reciprocal relationship had been established between comics, film, and television in their formative years. Through an exhaustive examination of their frequent adaptations of each other from the 1930s to the 1960s, Davis provides new, important insight on their development.

The arrangement of Movie Comics effectively highlights the reciprocity: throughout its six chapters, Davis vacillates between chapters historicizing cinema and television’s adaptations of comics and chronicling comics’ adaptations of the movies and television across three decades. What emerges is a clear pattern of mutual influence and growing pains as each matured. The first chapter, for instance, is centered on the movies—which were adjusting to the implementation of sound—returning to comic strips as source material after a brief period of abandonment. Davis details many of the opportunities and challenges this presented, particularly regarding authenticity. Concerns about fidelity to the comics immediately arose, as is evidenced by fans’ anxiety about and the marketing campaign for Skippy (1931), the first feature length film based on a comic strip. The text details the lengths Paramount went to assure doubtful fans that Skippy would offer an authentic experience—one perhaps better than the comic itself! Through examples such as Skippy and the first attempt at a Little Orphan Annie film, Davis indicates how “the idea of the comic strip brought to life” would serve as the guiding principle for comic book adaptations for years to come.[1]

Though cinema had looked to the comics for content since its advent, comics were slow to adapt films. As Davis indicates, this largely is because comic books did not exist in the conventional sense until the 1930s. However, the second chapter points to early film-to-comic efforts like the syndicated Mickey Mouse comic strip that emerged shortly after the legendary cartoon character made his cinematic debut in 1928. After providing a concise overview of the rise of comic books (including the birth of DC and Marvel), Davis spends the bulk of the second chapter on Movie Comics, the most robust adaptation of movie content of the 1930s from which he borrows the title of his book. Just as the studios wrestled with successfully recreating comics, comic books like Movie Comics were challenged by their desire to convey “the idea” of the movies.[2] The short-lived effort represented a watershed moment in film-to-comic adaptations.

Comics scholars will find that Movie Comics is not exclusively about superheroes comics, the medium’s most prominent genre. Indeed, because it provides extensive coverage of the years prior to the advent of superheroes and their nadir in the 1950s, Movie Comics only spends a single chapter on superhero comics adaptations. That said, this coverage certainly is not scant; in fact, its third chapter likely will prove invaluable to superhero comic scholars with its deep dive into the Batman, Captain Marvel, and Superman serials. Of great import here are the serials’ difficulties with special effects, for as Davis contends, fidelity was not paramount because producers generally believed that comics and their adaptations were intended for young audiences who would not care about authenticity.[3] As this relative lack of concern evidences, Hollywood held little respect for superhero comics yet coveted the established audience they brought.[4] Conversely, as the fourth chapter highlights, comics in the 1940s heavily appropriated the aesthetics and stories of the silver screen. Davis thoroughly examines what proves to be a rampant period of adaptation and tie-ins, with particular emphasis on how Disney extended its burgeoning empire in the pages of Dell Comics.

Movie Comics does not focus solely on movie adaptations, as its fifth chapter examines the many televisual adaptations that arose as television stations and ownership increased in the 1950s. Davis showcases comics’ influence on and utility for the then-nascent medium. Television certainly proved to be an excellent repository for comics-based content, especially since, as Davis notes, Hollywood had all but abandoned comics in the 1950s. Nonetheless, the 1950s were mostly full of failed attempts and false starts as television faced the same challenges as film’s early adaptive efforts, namely production values and audience.

Though television adaptations came and went throughout the 1950s, the comics themselves openly embraced television. The final chapter of Movie Comics thoroughly details the numerous ways in which the comics appropriated America’s new favorite medium. Davis provides cogent examples of comic books’ attempts to capitalize on television’s popularity, whether it be by replicating popular shows or actually promoting television sets—such as Crosley Division and Avco Manufacturing Corporation’s Tee and Vee Crosley in Television Land Comics. Comics also continued borrowing from the silver screen, with comics featuring celebrities—both real and imagined—supplanting (and occasionally interacting with) the once popular superhero comics.

Davis concludes Movie Comics with a brief glimpse at the interaction between comics, film, and television after this rampant period of cross-pollination. After the 1950s, the relationship between the three certainly continued, but it was no longer as profitable and strong. Indeed, as Davis suggests, the decline of film-to-comics adaptations may be partly responsible for the return of superheroes to prominence. As DC and Marvel emerged as the preeminent publishers of superhero content, they also looked to film and television for content, inspiration, and promotion. Some may find the conclusion somewhat curt, for it gives short shrift to our contemporary moment. Though the chapter is titled “The 1960s and Beyond,” Blair focuses primarily on the declining relationship between film and comics in the 1960s. Some deeper reflection—even if relatively brief given that he is concluding the text—upon what is currently a rampant period of adaptation seems warranted. However, given the book’s purview and the strength of the chapters that precede it, the conclusion suffices.

All told, Movie Comics is an accessible, consistent, and well-researched text that likely will prove useful to comics, film, and television scholars alike.

Phillip Lamarr Cunningham, PhD. is Assistant Professor of Media Studies at Quinnipiac University. His research primarily focuses on African American representation in popular culture. His scholarly work has appeared in Journal of Graphic Novels and Comics, Journal of Popular Music Studies, Journal of Sport and Social Issues, and M/C Journal: A Journal of Media and Culture and various anthologies on comics, film, television, and sports.