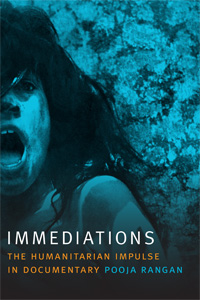 Immediations: The Humanitarian Impulse in Documentary opens with a startling reversal of a traditional understanding of the correlation between documentary and precarious life. The commonly held belief is that documentary engages with precarious life by activating a “humanitarian impulse” that benevolently intercedes into matters demanding immediate intervention. Rather than posing the familiar question of what documentary can do for endangered life, particularly in moments of emergency thinking (life is at risk and something must be done and done now), Rangan overturns this premise and asks instead, “What does endangered life do for documentary?”[1]

This is a stunning opening to a rigorous and incisive account of the protocols of participatory documentary filmmaking. Throughout Immediations, Rangan argues that, “endangered, dehumanized life not only sustains documentary, but supplies its raison d’etre.”[2] She identifies this phenomenon in new modes of documentary practice that seek to close the gap between the authorial position of the filmmaker and the status of the documentary subject as other. When the camera is turned over to the other, a move that ostensibly enables and empowers the recipient by giving the otherwise voiceless a voice, Rangan points out that what appears to be spontaneous and emancipatory in fact rehearses coded interpellations that reveal the “gift” of the camera to be ideologically calculated.

Following Marcel Mauss’s famous declaration that “there is no gift or sacrifice that does not obligate the recipient to reciprocate,”[3] Rangan identifies such obligations between giver and recipient and argues that the act of handing over the camera to the other under conditions of humanitarian emergency is a move shot through with various paradoxes pertaining to the empowerment such a move is presumed to bestow upon the disenfranchised. For Rangan, participatory documentary, “especially in its most benevolent guises, is thoroughly implicated in the work of regulating what does and does not count as human.”[4]

Rangan coins the term “immediation” to describe this phenomenon of coded reciprocation. The book is organized around four iterations of immediations each of which is examined through the following careful textual readings: In Chapter 1, “feral innocence” and its attachment to photographic representations of non-western children through a close analysis of Born into Brothels (2004); in Chapter 2, “liveness” and how the testimony of victims function as reportage from disaster zones as seen in a series of web videos titled Tele Geto from Haiti after the 2010 earthquake and the 2008 documentary Trouble the Water, shot from the perspective of a survivor of the floods during Hurricane Katrina; in Chapter 3, the use of voiceover narration to supplement “voiceless” nonverbal autistics in Autism is a World (2004) and In My Language (2007); and in Chapter 4, web videos of animal self-portraiture as evidence of emotional intelligence and non-verbal articulation. If Chapters 1 and 2 challenge the protocols of participatory documentary and seek to undermine the logic guiding its humanitarian impulses, Chapters 3 and 4 offer alternative models of intervention “that challenge the very notion of resistance or speaking out as a politically reflexive act.”[5] This dialectical structure characterizes the work at every level.

The book is meticulously structured and well-written, often stunningly so. The succinctness of thought and argument is one of the book’s more obvious achievements. At every step of the way, Rangan signposts her developing claims and takes care to situate her discussion in the longer arc of her central argument, consistently drawing clear conclusions from well-articulated premises. Frequently, when discussing a media object or introducing a writer, philosopher, or critical theorist, Rangan clearly states the importance of the text to which she refers and how it supports her broader argument. The book is almost virtuosic in its melding together of ideas and interdisciplinary discourses from genre study and feminist critique to postcolonial theory and continental philosophy. At no point does the reader feel lost in a thicket of theories or separated from engaging with her propositions by walls of specialized knowledge. Even if you have not seen the films or media Rangan discusses or are not familiar with the writers to whom she refers, her close, careful textual analysis fills in any possible blind spots. This book is a generative text for the specialist, but can also be read and the argument readily understood by readers outside of documentary studies or media studies at large.

Rangan notes in the introduction that a criticism of an early draft of her book pointed out that if capturing the image of the other in distress articulates a power relation that is inherently imbalanced between filmmaker and subject, and if the humanitarian gesture of turning the camera over to the disenfranchised other inevitably “invents the very disenfranchised humanity it claims to redeem,”[6] then we find ourselves in a kind of paradox where the deconstructionist methodology that propels her discussion checkmates the political possibilities of the image. I must admit to initially having a similar response to reading Immediations. I was suspicious of what appeared to be a go-for-broke deconstructionist view of participatory documentary that willfully refused to acknowledge the empowering potential of individuals who, living precarious lives, take hold of the camera to author their worldview. But page after page, and from one chapter to the next, Rangan painstakingly solidifies her position and compels the reader to reevaluate pathetic attachments to self-authored scenes of precarious life. This ability to pull back the curtain and recognize seemingly benevolent gestures – especially those bound up in power dynamics – for what they really are is the hallmark of strong ideology critique.

Immediations: The Humanitarian Impulse in Documentary is a significant contribution to the field of documentary studies in particular and media studies more generally. It is a book that deserves to be widely read.