With the reboot constituting a mainstay of 21st century television, there was something of an attendant inevitability to the August 2017 announcement that YouTube Red had ordered a series, Cobra Kai (2018–), in which the antagonists of The Karate Kid (1984) were reuniting more than thirty years on from the release of the original film. The Karate Kid has had a remarkable cultural persistence, evident in the fact that it produced three sequels (The Karate Kid II and III [1986; 1989] and The Next Karate Kid [1994]), as well as a box office-topping 2010 reboot featuring Jada Smith and Jackie Chan.

Indeed, a 2013 episode of the CBS sitcom How I Met Your Mother (S08E22), rehearsed the reunion of the actors who played the original Karate Kid, Daniel LaRusso (Ralph Macchio) and his nemesis Johnny Lawrence (William Zabka), when they made cameo appearances as a bachelor party surprise for Barney Stinson (Neil Patrick Harris). The joke in the sitcom was that, against popular understanding, Barney identifies Johnny as the real Karate Kid, seeing Daniel as a “nerd kid” who won the dramatic showdown fight in the original film with an “illegal head-kick.”[1] 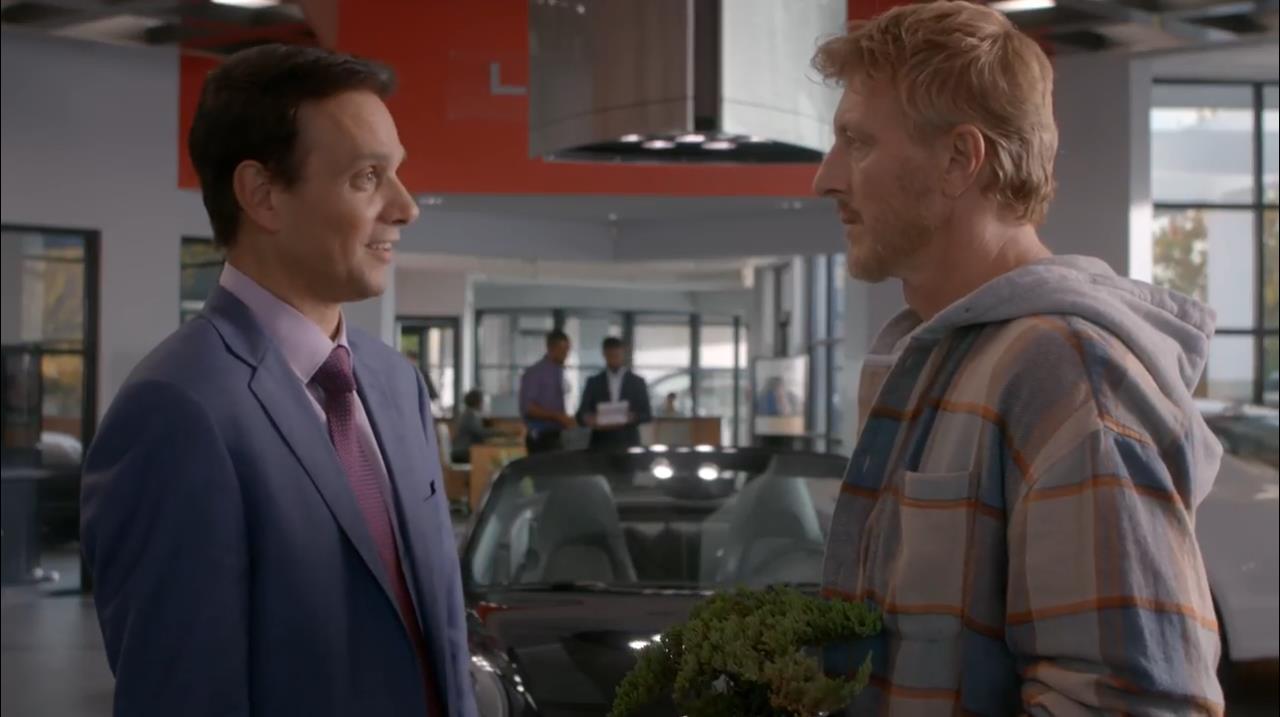 The reversal of perspective suggested in the sitcom episode bears some resemblance to the main premise of Cobra Kai, which provides a more sympathetic account of a down-on-his-luck Johnny, evidently still haunted by the events surrounding the 1984 Sun Valley Karate Championship. Initially, at least, Daniel is now the top dog, a successful businessman with his own car dealership, bragging to work colleagues about how he “kicked [Johnny’s] face,” when they meet in the first episode.

Fuelled by his animosity toward his longstanding rival and a set of circumstances in which he comes to defend a bullied teenage neighbor from a gang of high school thugs, Johnny reopens the Cobra Kai dojo, along with its win-at-all-costs “strike first; strike hard; no mercy” ethos. Over the course of the first series, a number of plot elements provoke Johnny’s re-evaluation of the unsportsmanlike Cobra Kai way as well as some of the outmoded 1980’s attitudes to which he initially clings, while the “next generation” develop coping strategies that stem from the older characters’ tutelage.

The narrative develops a number of parallels (both with The Karate Kid and in the twin Johnny/Daniel plotlines that constitute the new series). Johnny coaches a bullied teen in the Cobra Kai dojo, while Daniel takes a young man who turns out to be Lawrence’s estranged son, Robby (Tanner Buchanan) under his wing. Daniel provides one-on-one karate instruction along the lines of his own learning under Mr. Miyagi (Pat Morita).

In the final episode of the season, we are back at the Sun Valley Karate tournament, with Lawrence’s protégé Miguel (Xolo Maridueña), facing off against Robby. The fact that Miguel and Robby are themselves rivals due to a romantic plotline involving Daniel’s daughter Samantha (Mary Mouser) suggests an at times overly symmetrical approach to plot development that doesn’t always pay dividends. The underdevelopment of Samantha’s character is a conspicuous feature in a series so aware of the sexist ideologies that undergirded the franchise’s earlier incarnations. 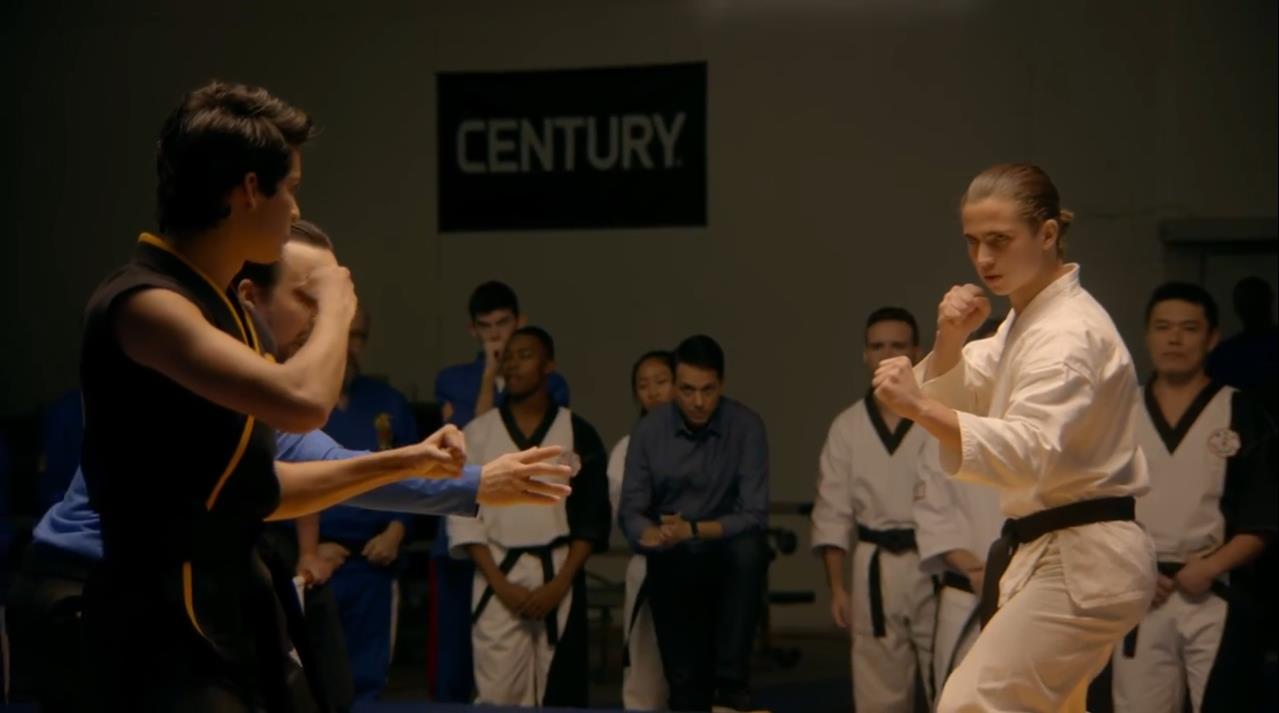 Figure 2: Through costume design (notable the distinctive Cobra Kai karate outfit) and mise-en-scene the reboot re-enacts events from The Karate Kid through the next generation as Robby and Miguel fight

Cobra Kai contrasts in this respect with Twin Peaks: The Return (Showtime, 2017), the reboot of David Lynch and Mark Frost’s cult series. Media scholar Matt Hills has analysed the “generational seriality” of Twin Peaks: The Return, noting how its “invocations of discourses of generationality” relies upon “key characters from the original run [who] are shown to have children of their own/or are represented in terms of visibly marked aging.”[2]

While generation-inflected familial plotlines are central to Cobra Kai, the series dwells less on the aging process, with both Machio and Zabka looking remarkably well for their fifty-something years. Cobra Kai instead presents a generational clash informed by a broad understanding of the norms of Generation X and younger millennials. In this way, the series can be understood as part of a broader trend in popular culture that encompasses such diverse screen texts as Survivor: Millennials vs. Gen X (CBS, 2016) and the romcom, Blockers (2018). 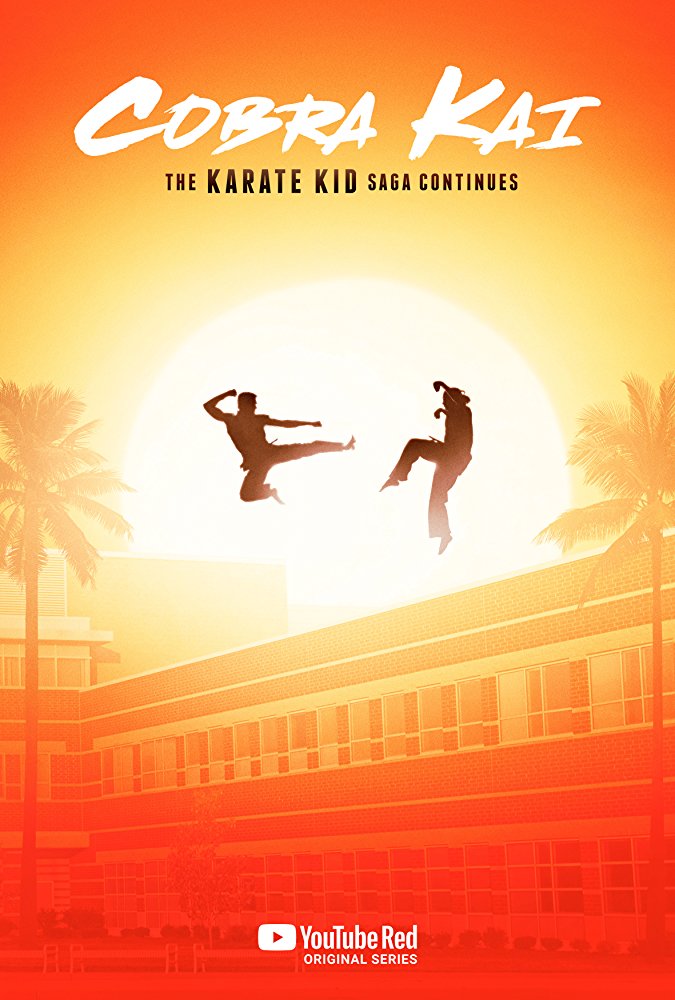 Cobra Kai’s invocation of the outdated assumptions of an older generation alongside some pernicious aspects of contemporary youth culture is key to its narrative development. Through this self-reflexive approach, the show avoids being constrained by nostalgia and generates enough dramatic storylines and comedic moments to fuel the ten half-hour episodes. The bullying that instigated the plot of The Karate Kid is profitably revisited in a 21st century context marked by a prevalence of online abuse. Johnny’s un-PC utterances clearly make up the comedic bedrock of the series, an approach that seems somewhat indebted to Billy Bob Thornton’s characters in both Bad Santa (2003) and Bad News Bears (2005).

Cobra Kai’s evident success in terms of both critical acclaim (with the series at the time of writing boasting a 100% Fresh rating on Rotten Tomatoes) and swift renewal for a second season attests to an appetite for the dramedy approach taken. With the return of arch-villain John Kreese (Martin Kove), the original Cobra Kai sensei, as well as, presumably, more substantial development of secondary characters such as Samantha, the show looks set to reinvigorate the popular franchise, and perhaps inevitably, further fuel the current trend for television reboots.

Anthony P. McIntyre is a Teaching Fellow in Media and Film Studies in University College Dublin, the book review editor of Television & New Media, and co-editor of The Aesthetics and Affects of Cuteness (Routledge, 2017). He is currently finishing a monograph entitled, Millennial Tensions: Generational Affect and Contemporary Screen Cultures.