On the surface, Bill Holderman’s Book Club (2018) is a delightful romantic comedy. The film concerns four middle-aged women with various lifestyles who meet periodically to discuss books they’ve chosen to read together. The engaging star power of the central cast provides the movie with plenty of comic energy: Diane (Diane Keaton) is a widowed mother of adult children who treat her as frail and in need of protection. She meets and falls in love with an airline pilot, Mitchell (Andy Garcia), much to the chagrin of her children.

Vivian (Jane Fonda) is a successful hotel owner who years ago rejected the love of her life, Arthur (Don Johnson), putting her career over her personal desires. Sharon (Candice Bergen) is a federal judge whose husband, Tom (Ed Begley, Jr.) has left her for a much younger woman. Sharon decides to use a computer dating app, leading her to encounters with interesting men, George (Richard Dreyfuss) and Dr. Derek (Wallace Shawn). Finally, Carol (Mary Steenburgen) is married to Bruce (Craig T. Nelson), a man embarrassed by his struggle with erectile dysfunction, causing considerable strain on their marriage. The individual plot lines resolve amicably: Diane, Vivian, and Carol find or re-kindle true love, while Sharon continues her search for Mr. Right courageously reloading the dating app on her computer after having chickened out and deleting it earlier in the film.

The academic study of the feminist importance of women’s book clubs subtends the positive portrayal of women-identified women in Holderman’s film. This work was begun by Janice Radway in her seminal study, Reading the Romance: Women, Patriarchy, and Popular Literature, published in 1984. Radway studied women who got together to read romance fiction, a genre deemed unworthy of academic attention by the cultural arbiters of great literature. In the wake of an explosion of feminist studies of women reading together in communities of thinkers, Kathleen Rooney’s Reading with Oprah: The Book Club That Changed America (2005) provided an apotheosis to this positive facet of women’s experience, especially in eras of backlash and a very different neo-conservative positioning of women within the culture.

Yet the case of Oprah’s Book Club (which aired as a segment on the wildly popular syndicated daytime talk show, The Oprah Winfrey Show from 1996-2011) raises a serious limitation of Holderman’s film. Oprah played a large part in widening the scope of books being normatively read across America. For example, Oprah shined a light on African-American feminist literature, moving the complex modernism of Toni Morrison’s Beloved (1987) from college classrooms to populist book clubs, now reaching an impressively wide range of American readers.

Unlike Oprah’s Book Club, Holderman’s film devalues the radical potential of book clubs, reducing the sociological importance of these feminist communities, instead highlighting conventional stereotypes of wine drinking amidst marginal conversations about the books purportedly bringing the women together in the first place.

Figure #3: Copies of 50 Shades of Grey strewn among wine glasses in Book Club

The film is structured around the women’s reading of E.L. James’ trilogy of sado-masochist novels, beginning with Fifty Shades of Grey (2011). The film flashes back twice to the formation of the women’s book group, beginning with their reading of Erica Jong’s Fear of Flying (1973), a landmark piece of literature deeply intertwined with the second-wave of the feminist movement in the United States, and indeed a novel partly responsible for the rise of women’s consciousness-raising groups, which eventually morphed into middle-class women’s book reading groups.

While I know I run the risk of replicating a patriarchal hierarchy of great vs. popular literature, it strikes me that the shift from Erica Jong in the 1970s to E.L. James in the 2010s represents a significant decline in the complexity of representing female sexuality, a loss not inconsequential to the weakening importance of feminism in the culture at large, having been beaten down by the Reaganite backlash of the 1980s straight through to the blatant sexism of the demonic world of Donald Trump. 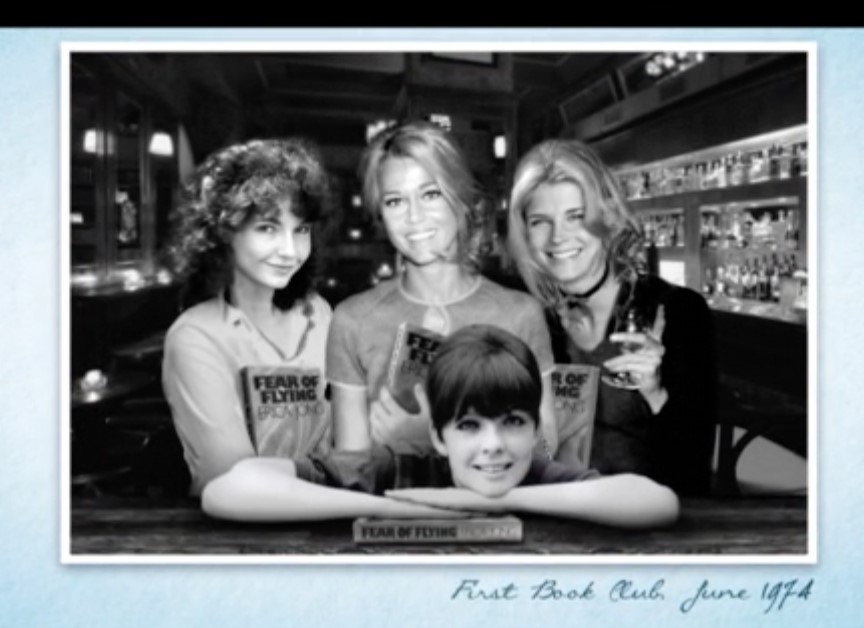 In spite of these good intentions, Book Club is incomprehensibly tone deaf to two major critiques of second-wave feminism. First, one political shortcoming of feminist consciousness raising was that it did not strike at the heart of patriarchy, men’s abhorrent behavior. Holderman’s Book Club does little to help matters: men do not read in the film, presumably because they are more interested in golf clubs. A throw-away gag—Sharon divorces her husband because he doesn’t understand all of the fuss about “don quicks-oat”—indicates that women are more inclined than men to understand that the roots of the modern novel lie in Miguel Cervantes’ masterpiece, Don Quixote (1612).

Figure #6: Book Club sides with Sharon: she divorces her husband for his literary ignorance

Secondly, in an America riven by worsening racial conflict, Holderman’s film is shockingly white, featuring no significant characters of color. And here is where the film’s refusal to valorize the superiority of some forms of fiction over others becomes most damaging. When Diane begins her relationship with the pilot Mitchell, she refuses to admit to reading Fifty Shades of Grey, instead insisting that she is reading Moby-Dick. There is a call back to Melville’s 1851 novel, as a sight gag shows Diane hiding behind Moby-Dick as a smoke screen, obscuring the book club’s choice of the E.L. James works.

Figure #7: Diane reads 50 Shades of Grey while her future boyfriend, Mitchell sleeps next to her

Figure #8: Pursuing a courtship with Mitchell forces Diane to pretend to read Moby-Dick

If indeed the book club had chosen Moby-Dick to read, they would have discovered the most radical of 19th century American literature, in which Melville desperately argues that our ship of state will sink without addressing the original sin of the nation, the inhuman treatment of African-Americans. In the novel’s best moment, central protagonist Ishmael sleeps in a crowded New Bedford inn, scared to death throughout the night that his bunk mate, a Pacific islander, Queequeg might chop off his head and shrink it as a memento. Instead, Ismael wakes up to gaze lovingly at Queequeg’s face.

Melville’s anti-racism achieves its grandest gesture in Ishmael’s observation that the person of color sleeping with him most reminds him of George Washington, a founding father of the American experiment in freedom. The privileging of preposterous S/M sexuality of white men and women in Bill Holderman’s Book Club over the exquisite critique of racism in Herman Melville’s masterpiece serves as an allegory for the film’s political failure.

The film’s disappointing fantasy of an exclusive world of whiteness fails to stand up to the complexity of Melville’s 1851 critique of such politics, never mind 2018, when the President of the United States shockingly goes unpunished for sexually assaulting women and valorizing racist neo-Nazi groups. We need every social institution at our disposal to rectify this horrendous backward turn in American politics, including our book clubs.

Figure #9: A call back to the opening group shot of the women together in Book Club

Walter Metz is a Professor in the Department of Cinema and Photography at Southern Illinois University Carbondale, where he teaches film, television, and literary history, theory, and criticism. He is the author of three books: Engaging Film Criticism: Film History and Contemporary American Cinema (2004), Bewitched (2007), and Gilligan’s Island (2012).