Director Todd Haynes’ new film, Wonderstruck (2017), is a revelation. Haynes’ loving reconstructions of popular American film culture have earned him a reputation as an exquisite art filmmaker. For media scholars, his most compelling work has been 2002’s Far From Heaven, a film which uses motifs from Douglas Sirk movies to question 1950s American assumptions about sexism, racism, and homophobia. More recently, Haynes’ film Carol (2015), an adaptation of Patricia Highsmith’s lesbian romance novel, The Price of Salt (from 1952), garnered lavish critical praise, including six Oscar nominations.

Wonderstruck finds Haynes artistically moving beyond even his previous excellent film work. Based on the eponymous graphic novel by Brian Selznick, the film crosscuts between two stories, one in 1927 about a deaf girl, Rose who flees her tyrannical father to travel alone to New York City to reconnect with her mother, a famous silent film star, Lillian Mayhew (Julianne Moore), a character based on Lillian Gish. Haynes crosscuts between this story and its doppelganger, a tale of Ben, rendered deaf by being struck by lightning in 1977. Living with relatives after the death of his mother, Ben flees to New York City to find his father, about whom he knows next to nothing. The plotlines collapse as we learn that Rose is Ben’s grandmother, whose artistic triumph was a massively intricate diorama of New York City displayed at the 1964 New York World’s Fair in Queens. The plot ends with the elderly Rose and the child Ben sharing the experience of the 1977 blackout in New York City, not in horror, but in blissfully admiring the stars above them.

Graphic novelist Brian Selznick is most famous for his work, The Invention of Hugo Cabret (2007), which tells the story of an orphaned boy who helps rediscover the turn-of-the-century cinema work of Georges Melies in 1930s Paris. That novel, using pencil sketches to replicate the black-and-white cinematic devices of Melies, was adapted into a spectacular film by Martin Scorsese, titled more simply, Hugo (2011). Scorsese is one of the Hollywood filmmakers most interested in the history of cinema; his film reconstructs the famous gag in Harold Lloyd’s Safety Last (1923) in which the slapstick comedian hangs off the hand of a clock atop a giant skyscraper. But in Wonderstruck, Haynes has surpassed even Scorsese in creating a cinephile’s dream.

Selznick’s novel gives Haynes plenty of raw materials with which to play. Selznick tells Ben’s story as a written novella, but intercuts it with Rose’s tale, told only in black-and-white pencil sketches. As in The Invention of Hugo Cabret, Selznick’s novel uses still images on sequential pages to reproduce cinematic effects, such as tracking shots, and cuts from long shots to close-ups. Haynes takes Selznick’s idea even further. He shoots Rose’s story, about the conversion to sound film in late 1927, using the devices of the golden age of late American silent filmmaking. For Ben’s story in 1977, he uses cinematographic techniques that invoke Hollywood Renaissance films about New York City in its full state of moral decay, most crucially, Midnight Cowboy (1969) and Scorsese’s own Taxi Driver (1976).

Figure #2: Ben wanders the mean streets of 1977 Manhattan in Wonderstruck

Wonderstruck has all sorts of film history tricks up its sleeve. Ben follows a clue about the whereabouts of his father to a bookstore in a run-down neighborhood. The shop owner, Walter, who turns out to be Ben’s great uncle, puts an audio cassette tape into his store’s sound system. On the soundtrack, we hear “Also Sprach Zarathustra,” Brazilian musician Eumir Deodato’s 1973 jazz-funk rendition of Richard Strauss’ original composition (itself made famous again in cinema by Stanley Kubrick in 2001: A Space Odyssey [1968]). The Deodato version is most cleverly used in film by Hal Ashby in his 1979 adaptation of Jerzy Kosinski’s novel, Being There (1970). Chance the Gardener (Peter Sellers) has spent his whole life taking care of the “Old Man” in a house in Washington, D.C. When the man dies, Chance, who has never had contact with the world outside of what he’s seen on a television screen, is kicked out of the house by the heirs to the estate. Set to the duration of Deodato’s “Also Sprach Zarathustra,” Chance wanders the city streets, not knowing what to do.

Haynes re-enacts this through a much shorter sequence, of the elderly Rose hurrying to the bookshop to meet her grandson for the first time. Like Selznick’s novel, Haynes’ film redeems the city: both Rose and Ben at first find the city overwhelming and threatening, but eventually find their footing and things end happily for them. Chance too ends his film happily, although under bitterly ironic circumstances: the political powerbrokers of the nation’s capital think the mentally challenged Chance is a genius because he uses simple gardening metaphors to explain the world. As the film ends, and it seems likely that Chance will become the next president of the United States, Ashby frames the shot to make it appear that Chance is walking on water. Haynes drains his film of Kosinski’s and Ashby’s brutal critique, merely quoting wisps of Being There’s use of Deodato’s music: once the elderly Rose arrives at her brother’s bookshop, the dangers of the city for Ben dissipate.

But Wonderstruck’s greatest coup lies in its reconstruction of King Vidor’s The Crowd (1928), one of the last great silent films before the conversion to sound. In Vidor’s film, a young man, Johnny Sims comes to New York City to make his way in the world after the death of his father. In one of the most compelling stories about the American dream in all of cinema, we watch the city grind away Johnny’s dreams of becoming the president of the United States, instead ending up settling into a fraught family life. He ends the film in merely taking pleasure in going to a vaudeville show, to laugh and avoid the pain of struggling against the crowd.

In Haynes’ film, Rose’s arrival by ferry onto Manhattan replicates the travels of Johnny Sims. In The Crowd, footage from 1921’s Manhatta (an experimental film by art photographers Charles Sheeler and Paul Strand), positions Johnny as a tiny speck amidst the swirling crowds on the streets of the city, amidst gigantic skyscrapers whose complete height cannot be captured even by the film camera. Haynes uses black-and-white film stock to position Rose as Johnny’s direct heir. We see the little girl overwhelmed by the restless crowds and the imposing buildings, falling to the ground amidst their hurried footsteps. 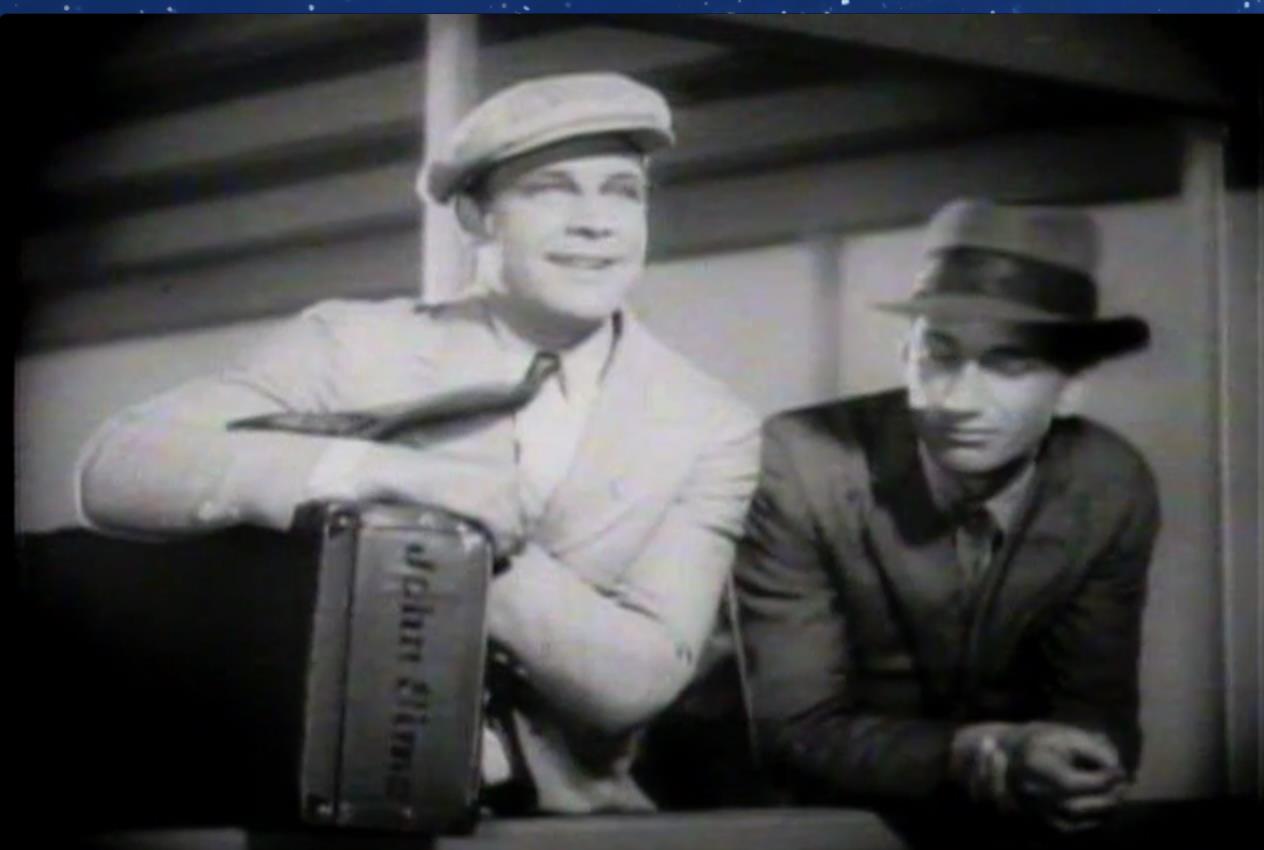 Figure #3: A commuter on the ferry to Manhattan scoffs at Johnny Sims in The Crowd

Figure #4: Rose rides the ferry to Manhattan in Wonderstruck

But Haynes withholds his most significant engagement with The Crowd until his film’s ending.

Both Ben in 1977 and Rose fifty years earlier converge at the American Museum of Natural History, obsessed with collecting objects as precious connections to the human experience. In both Selznick’s book and Haynes’ film, the museum serves as an allegory of cinema, a memory palace full of historical mise-en-scene.

Figure #5: Ben and Rose walk through her diorama of New York City in Wonderstruck

As the elderly Rose shows the young Ben her triumphal work, the diorama now housed at the Queens Museum of Art commemorating the world’s fair, Haynes’ camera tracks diagonally across a vast array of museum workers at their desks. This shot replicates the best shot in The Crowd: early in the film, Johnny gets his first job, adding up rows of numbers on ledgers all day long. He himself is reduced to the numerical sign at his desk, in lieu of a name plate. Vidor’s camera ironically cranes diagonally across dozens of similar accountants robotically serving as cogs in a capitalist machine. 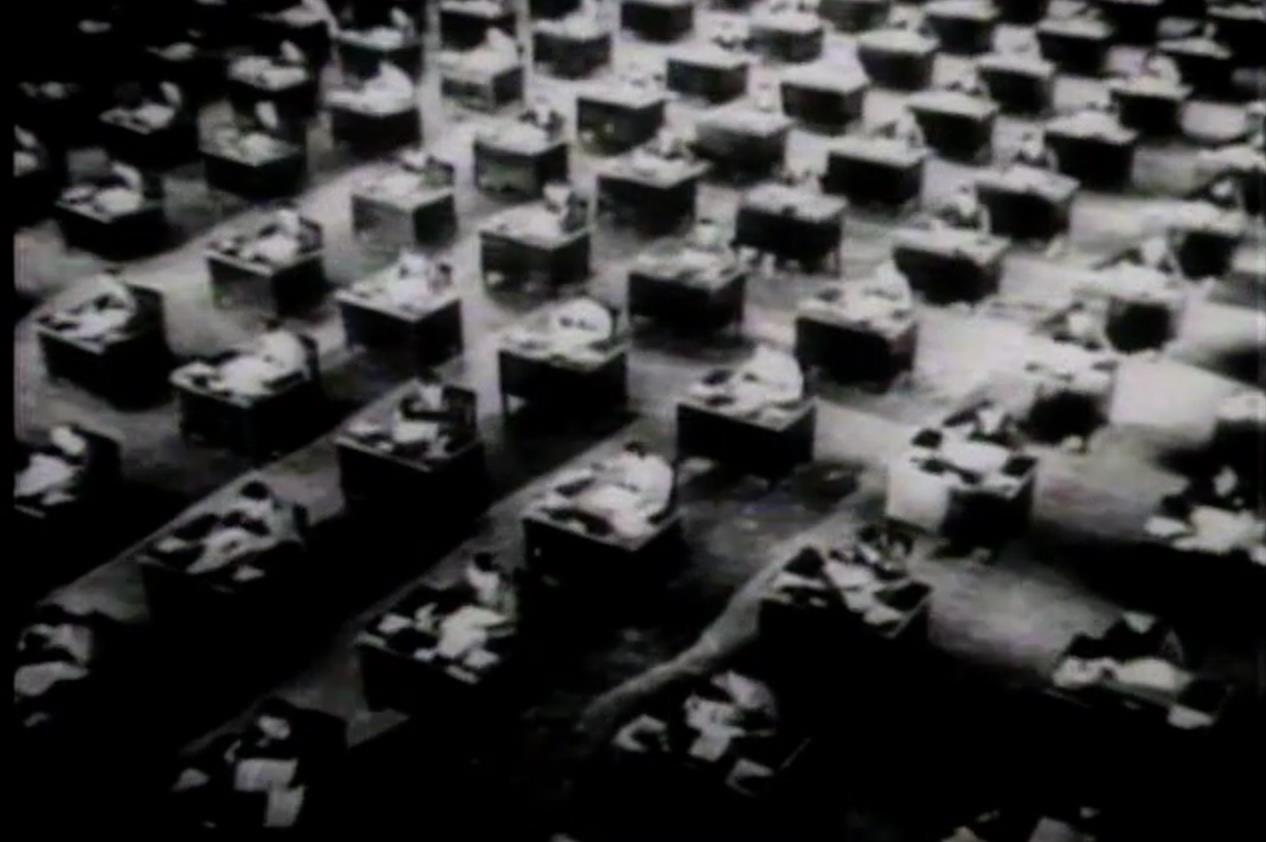 Figure #6: The camera cranes diagonally across the workers’ desks in The Crowd

The exact shot in Haynes’ film redeems Vidor’s irony. As Rose in voice-over tells us that she got her start as a museum worker curating the objects donated to the Museum of Natural History, Haynes’ camera tracks diagonally across an array of such workers, finally coming to settle upon a puppet image of Rose, happily working at her desk on a model of a wolf’s head for one of the natural history exhibits.

Figure #7: A puppet version of Rose in the diorama among an array of desks in Wonderstruck

The shot brings to closure Selznick’s entire story: at the opening, Ben has nightmares about wolves chasing him through the forest. Rose’s work tames violent nature, dissipating the threat not only of the bestial world, but also of the urban decay of the city. Rose’s successful career as a museum artist brings Ben into the fold, positioning the former orphan as the scion of an artist’s family, the great-grandson of a silent film star and the grandson of a talented museum curator. What strikes with such force is that our connection to that tale is equally produced by Haynes’s cinema, and the cinema-emulating graphic novelistic work of Brian Selznick. It is a film which will leave you struck by wonder at the joys of human artistry, as all great cinema should.

Walter Metz is a Professor in the Department of Cinema and Photography at Southern Illinois University Carbondale, where he teaches film, television, and literary history, theory, and criticism. He is the author of three books: Engaging Film Criticism: Film History and Contemporary American Cinema (2004), Bewitched (2007), and Gilligan’s Island (2012).