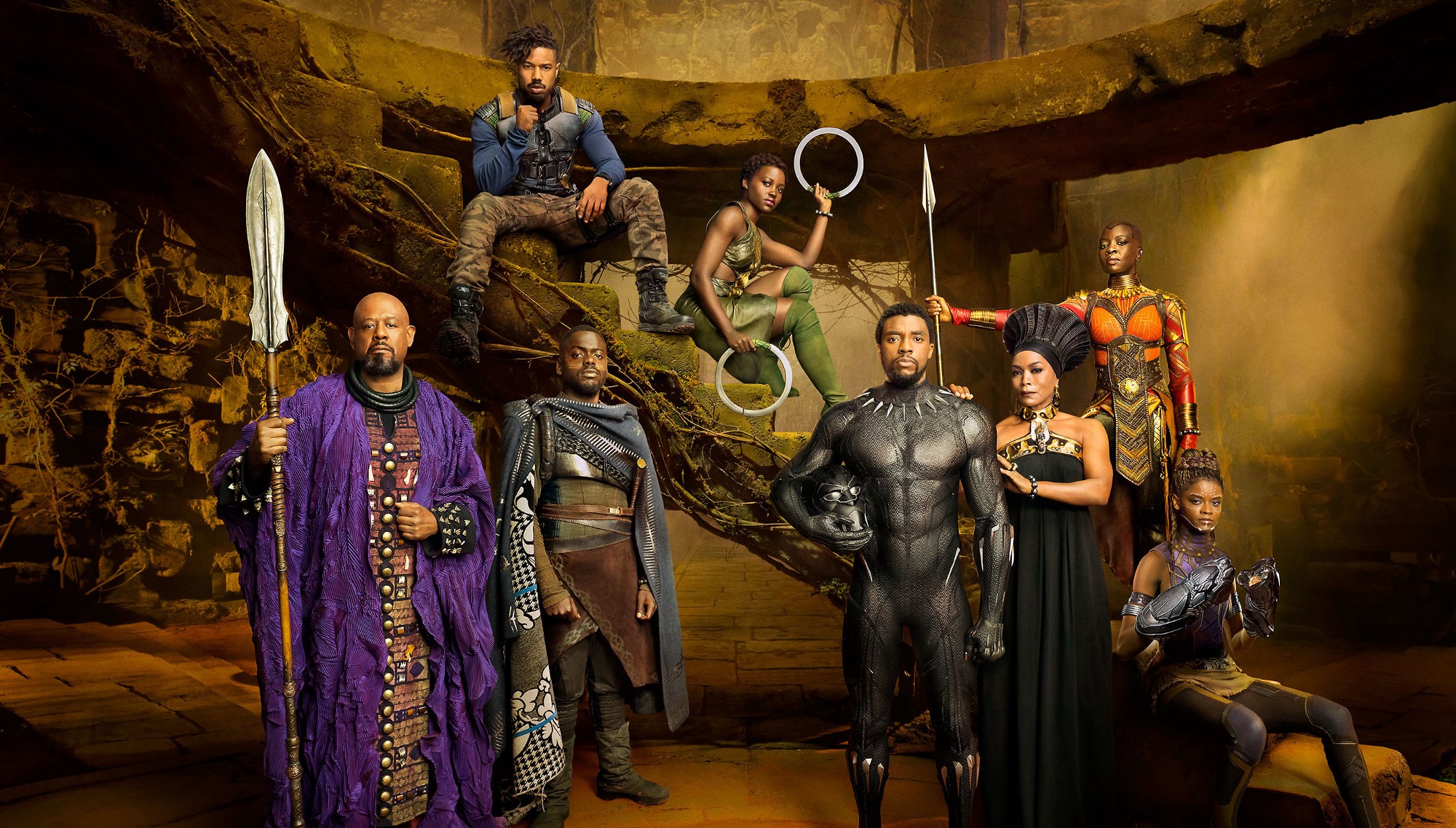 Most readers will be familiar with the hype around Black Panther. The latest installment of the Marvel Cinematic Universe now stands, quite ceremoniously, as a film of many firsts—the first “black blockbuster,” the first Marvel film to feature a black superhero, black director and mostly black cast, the first to make more than $1 billion globally, the first film to get a studio-funded Oscars 2019 campaign, and the list goes on.

But perhaps the most important “first” has to do with the unprecedented nature of the hype itself: Black Panther is arguably the first tentpole movie whose box office success has become something of a social cause. According to its boosters, anyway, the bigger the film’s grosses, the more likely Hollywood will be “woke” to the value (economic and otherwise) of showcasing blackness on the big screen.[1]

For this reason, discussions about the film’s earnings have shifted smoothly into arguments about racial justice. Indeed Black Panther has been deemed a watershed moment in the cultural history of African-American people[2]—a radical[3] and revolutionary[4] cinematic breakthrough whose commercial success bodes well not only for the Walt Disney Company, its corporate proprietor, but the black community as a whole.

On that basis, the film’s market influence delivers a kind of equity. Also on that basis, a host of other class-inflected shibboleths about race-group interest emerge: not least that the vaunted status of Black Panther’s filmmaker and actors—the newest members of Hollywood’s black creative elite—binds the interests of all black people; or that a victory for them is also a victory for populations who “look like them,” even those who can’t afford a ticket.

Hence the so-called grassroots fundraising endeavor to subsidize private screenings of Black Panther for kids across the country.[5] Dubbed the #BlackPantherChallenge, the campaign emerged as the brainchild of Fredrick Joseph, a New York City marketing consultant who was inspired by Black Panther’s “positive black representations” to start a GoFundMe drive in order to buy tickets for the Boys and Girls Club of Harlem.[6] When more than 700 people donated, including Chelsea Clinton, Ellen DeGeneres and J.J. Abrams, Joseph’s activistist model went viral. Soon donations were flowing into more than 500 similar GoFundMe campaigns across the country, raising a total of $775,000. In addition student groups, sports teams, teachers, businesses, and Hollywood stars were all organizing their own sponsored screenings of the film. The point, as Octavia Spencer pointed out on Instagram right before buying out a theater in Mississippi, was “to ensure that all our brown children can see themselves as a superhero.”

While it might seem odd to watch celebrities and civic groups come together to subsidize Hollywood’s success through secondary distribution networks, it’s not at all odd to see the crowdfunding economy at work in the cultural sphere. Nor is it odd to see it at work with respect to Black Panther. After all, the film ends with a call for charity: when the hero (T’Challa, played by Chadwick Boseman) makes his way to Oakland to perform “outreach” for poor black kids (and his aristocratic sister sneers at their ghetto surroundings), or when (following the closing credits) the same king of Wakanda (the fictional African nation whose opulence is built on precious, exclusive metals) announces to the United Nations that he’ll be sharing the wealth, to a point—in both cases, the feel-good theme of black benefaction parallels the philanthropic discourse of the #BlackPantherChallenge. And in both cases the result is a neoliberal model of charity wherein the mega-rich take selective pity on the chosen poor.

But the parallels don’t stop there. Whereas the fictional rulers of Wakanda preserve their wealth by pretending to be poor, using advanced to technology to mask their vast fortune, the real tycoons behind the film have also conjured a bit of economic subterfuge in order to receive corporate handouts. Hence the reason why principal shooting for Black Panther took place in Atlanta, Georgia: the tax breaks. Over the last decade, in fact, Georgia has become known to producers as the Hollywood of the South thanks to the state doling out more than $1 billion in tax credits to industry behemoths like Disney and Sony.[7] In return Georgia has become the leading runaway-production site for Hollywood feature films.

While proponents say much of this money will trickle down to the population, there’s no way of knowing since the state hasn’t developed a mechanism for evaluating its overall impact.[8] Furthermore, because these incentives typically go to productions that shoot on-location, they require little in the way of long-term investment and produce mostly temporary employment. Even when they do beget jobs, they aren’t great: after ten years of tax subsidies, for example, Georgia has added only 4,209 film jobs, just under 2 percent of the industry total, and those jobs don’t pay well: on average film-industry workers in Georgia are the lowest waged.[9]

This is why Vicki Mayer and Tanya Goldman (following Thomas Guback) call such movie production incentives “welfare for the wealthy:” because they function “like every other bloated financial system in the U.S., moving capital between elites while workers live with exaggerated job insecurity, declining market value, and uncertain futures that make up the rest of the workforce.”[10]

Of course lost revenues from tax credits also means lower government spending in other areas as well. And indeed since 2003, Georgia has ranked among the nation’s austerity leaders in cuts to public school funding. As of the 2018 state budget plan, the state’s schools will have been slashed a cumulative total of $9.2 billion.[11] Those cuts in turn play out in places like Atlanta, a city that currently ranks first in the US for income inequality, where 80 percent of black school students live in areas of high poverty and 75 percent qualify for meal assistance.[12] Not coincidentally, it’s also a place where local rap stars like T.I.—“The King of the South”—teamed up with corporate sponsors like Walmart to make sure those same kids who can’t eat still get to see Black Panther.

Is it any wonder, then, why this city which is located in the same state giving millions in tax revenues to one the most profitable industries in the US is now obliged to its pop culture “royalty” for taking poor kids to the movies? Certainly this scenario is not out of step with a blockbuster about monarchical superheroes “doing good” under the specious cloak of third-world poverty. Nor is it out of step with a Hollywood system that delivers such high-priced spectacles on the basis of a political economy of regressive wealth redistribution, neoliberal governance and precarious labor.

That a billion dollar industry might capitalize on such conditions and still be considered a champion of black empowerment is telling. Indeed it’s agreeable with a hegemonic model of identitarian wokeness that considers films about mega-rich superheroes to be progressive insofar as those superheroes (and the stars who play them) aren’t all white and male. The fact those same superheroes emerge at a time when intensifying economic inequality is acutely affecting black-majority cities like Atlanta is enough to recall Theodor Adorno’s dictum about the false promises of the Culture Industry, wherein “the idea of ‘exploiting’ the given technical possibilities, of fully utilizing the capacities for aesthetic mass consumption, is part of an economic system which refuses to utilize those same capacities when it is a question of abolishing hunger.”[13]

Obviously, that's not the way Black Panther’s enthusiasts would have it. For them, the film affords “positive images” in the guise of African nobility—something widely welcome at time of Trump and other noxious emitters of anti-black bigotry. But to classify such images as racial uplift is to confuse the symbolic value of highborn black superheroes with the ostensive communities they represent. Indeed it clouds the way some perceive the inequalities that prevent such communities from seeing the film in the first place. As Joseph told The Wall Street Journal following the success of #BlackPantherChallenge: “I understand that there are other struggles that these children have, whether housing, food or education. [But] it's not just any movie. It's a symbol that you can transcend in this turbulent era.”[14] By this logic, which assumes “representation and inclusion are essential to creating dreams for yourself,”[15] the main thing poor black kids need is inspiration, not money.

Accordingly the main thing they get is a trip to the movies—one that will, if all goes according to Joseph’s plan, convince those same poor black kids that they have something in common with rich black people, whether it’s the kings and queens they see on screen or the creative professionals who behoove us to pay (literal) tribute to them. Meanwhile those kids’ schools and neighborhoods will continue to deteriorate thanks to the very policies and promotions that make a film like Black Panther possible.

This piece was reprinted by Film Criticism with permission from CounterPunch magazine.