The most elementary definition of ideology is probably the well-known phrase from Marx’s Capital...“they do not know it, but they are doing it”... [It] implies a kind of basic, constitutive naiveté: the misrecognition of its own presupposition, of its own effective conditions, a distance, a divergence between our so-called social reality and our distorted representation, our false consciousness of it...The cynical subject is quite aware of the ideological mask and the social reality, but...still insists on the mask. The new formula...would then be: “they know very well what they are doing, but still, they are doing it.” [1]

In the wake of Trumpism, two culturally iconic but long-defunct sitcoms were rebooted (read: resurrected). In 2017 Will and Grace (1998-2006) returned to NBC, and in 2018 Roseanne (1988-1997) was revived by ABC. By way of context, Roseanne’s run corresponded with the decline of the Reagan Revolution under George H.W. Bush and the first term of Bill Clinton, the face of “New Democrat” neoliberalism. Roseanne Conner (Roseanne Barr) represented the struggling white working class increasingly alienated and frustrated in the 1990s, a constituency that was marginalized by the New Democrats as much as the GOP. In contrast, Will and Grace emerged in the twilight of Clintonism and the resurgence of social conservatism under George W. Bush. Will Truman (Eric McCormack) and Grace Adler (Debra Messing) represented 1990s New Democrat ideals: Will was an openly gay, financially well-off attorney, and Grace, a feminist interior designer. In this way, Roseanne was a caustic albeit implicit response to Clintonism whereas Will and Grace was a sharp-tongued defense of cosmopolitan identity politics.

The rebooted premieres of both shows situated the titular characters within a fractured post-Trump America. In Will and Grace’s return, Grace is faced with political dilemma when she is approached to redecorate Trump’s Oval Office. As much as it repels her, she accepts the job offer for the financial gain and potential boost to her career. Ultimately, Grace cannot reconcile her progressive neoliberalism with working for Trump; she quits the job after being confronted by Will and a subsequent Oval Office pillow fight. Despite the surplus anti-Trump jokes, Willa Paskin pointed out that Will and Grace “are now members of the liberal establishment...older, affluent, white people with identity politics affiliations...In 2017, Will and Grace is still a show that America needs, because now it’s a show about white, moneyed, liberal hypocrisy.”[2] 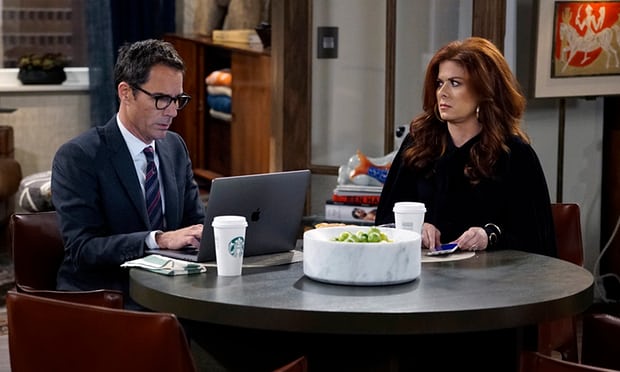 When New Democrats Grow Old: Will and Grace (2017)

The 2018 return of Roseanne was already awash in controversy in that Roseanne Barr was a vocal Trump supporter, rabid Hillary Clinton critic, and proponent of alt-right conspiracy theory during the 2016 election and beyond. In the reboot debut episode, Roseanne and her sister Jackie (Laurie Metcalf) are still bitterly estranged over politics, although Jackie is not so much devoutly anti-Trump as a bleeding-heart, hand-wringing liberal stereotype who indignantly can’t bury the hatchet with Roseanne. Not surprisingly, Roseanne Conner is now the representation of the white, working-class Trump supporter specifically attracted to Trump’s promise to salvage industrial capitalism in Middle America while succinctly defining Hillary Clinton as “the worst person alive.” 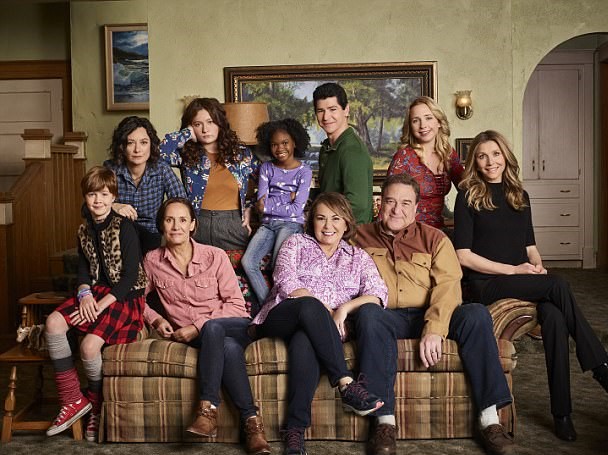 That said, Roseanne now has one granddaughter who is bi-racial and a grandson who is “gender fluid.” While Roseanne is (grudgingly) supportive of identity politics—one might say a “kinder, gentler Trumpism”—her conservative invective is unleashed at big government, welfare-state capitalism. As Roseanne tells Jackie (and the idealistic liberals in the TV audience that Jackie represents), “You want the government to give everybody free healthcare because you’re a good-hearted person who can’t do simple math.”

In terms of Zizek's (Lacanian) analysis of ideology, Roseanne Conner does not know it, but she is doing it by embracing the imaginary of Trumpism as the salvation of the white working-class against the real of dying industrial capitalism. Will Truman and Grace Adler know very well what they are doing, but are still doing it by clinging to the imaginary of ironic self-awareness as a form of political opposition in the real of their professional class privilege. By extension, on Roseanne the die-hard Trump supporter mocks the whining Trump critic while on Will and Grace the well-to-do liberals now knowingly mock themselves. Indeed, Roseanne Conner represents the brash voice of “us-versus-them” white working-class resentment: the “us” of Trumpism opposed to the “them” of liberal elitism. As representations of liberal elitism, Will and Grace respond to Trump’s America with “critical distance,” a sense that their identity politics places them above it all, yet still against it—as much as they are inherently part of it. While the two reboots still exist in two vastly different Americas—downtrodden working-class Midwest on Roseanne versus upscale bourgeois NYC on Will and Grace—they both share in the same message as far as critiquing the alleged failure of the “liberal Establishment.”

Moreover, the greater solace the reboots of Roseanne and Will and Grace ultimately offer is nostalgia, the comfortable position that desperate times call for dated solutions. In 1975, Lester Bangs wrote a scathing critique of the Beatles, contending: “they well may have stood for an era, so well as to stand out from that era; totally exhumed from it...They can be dusted off at appropriate intervals, depending on the needs of Capitol’s ledgers and our own inability to cope with the present.”[3] The same can be said for Will and Grace and Roseanne as two competing discourses that defined America’s political and socioeconomic landscape of the 1990s. Two decades later, these sitcoms can be dusted off for the needs of NBC and ABC ledgers and our own inability to cope with Donald Trump.