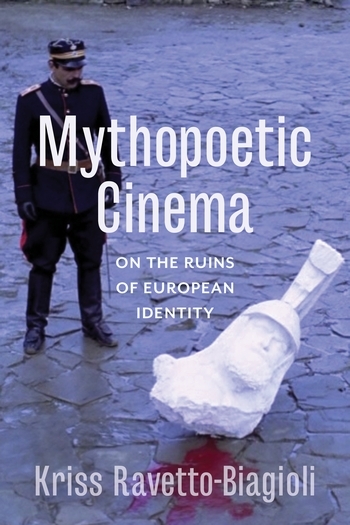 A book titled The Mythopoetics of Cinema: On the Ruins of European Identity certainly draws attention, as most contemporary film criticism positions itself as solidly anti-mythopoetic. Kriss Ravetto-Biagioli frames mythopoetics as “most commonly understood as the process of mythmaking—a creative practice that transforms ideas into themes, themes into narratives, and narratives into social meaning.”[1] Ravetto-Biagioli instead reads mythopoetics in cinema “against the grain,” positioning mythopoetics as a “filmic critical practice” meant to deconstruct and hence critique constructions of Europe.[2] Herein, Ravetto-Biagioli focuses on the (de)construction of European myths in the works of four artists: Aleksander Sokurov; Theo Angelopoulos; Marina Abramović; Jean-Luc Godard. She conducts thorough and interesting analyses of polarizing European filmic and artistic texts from the past four decades.

In the chapter on Sokurov’s Russian Ark Ravetto-Biagioli examines the use of the long-take, ellipses, and the narrator to negotiate the dialectic of memory and historical forgetting, as well as Tsarist Russia versus a European identity. The second chapter on Theo Angelopoulos’s O Megalexandros (1980) follows the use and defamiliarization of symbolic imagery to critique Greece’s historical and modern position in a hierarchical Europe. In Chapter 3, “In Balkan: Marina Abramović and the Poetics of the Suffering,” Ravetto-Biagioli suggests Abramović’s performance art of the body interrogates the links among victimization, morality, and trauma. Chapter 4 expands on this similar investigation of morality and victimhood through a reading of Godard’s Notre Musique (2004), which faced controversy through its questioning of victimhood and justice through the lens of the Holocaust.

There are two primary issues with the overall arc of Ravetto-Biagioli’s argument. First, there remain the slippages in terminology. For example, in the introduction, Ravetto-Biagioli critiques the “identity politics” she designates responsible for the reactionary rise of nationalist identity parties in Europe. The author never explicitly states how she defines “identity politics,” nor does she give specific examples.[3] (It would also be more helpful to give specific examples of the “new European cinema” against which she argues.)[4] At least in the United States, “identity politics” is often used as a pejorative term to silence feminist and minority movements. Her assignation of identity politics as a neoliberal idea fits into what some on the left have described as a form of White Marxism. However, in the epilogue, the author uses an example that seems to critique her previous stance on “identity politics” from the introduction. She cites reaction to the 2015 Charlie Hebdo attacks as a moment where the claim to “free speech” failed to recognize the systemic oppression of non-whites in France. At the same time, Ravetto-Biagioli’s previous critique of identity politics follows the justification used by the left in France. They suggest that the caricatures of minorities in Charlie Hebdo should not be read as racist, but rather a deconstruction of stereotypes through (what they define as) satire.

Second, the author’s argument hinges on whether or not the reader can agree with the claim that a form of representation could be read as a critique through the lack of political statement. For example, Ravetto-Biagioli’s reading of sexual dynamics and power in Marina Abramović’s art installations and performances comes across as retrograde rather than politically radical. (Though, admittedly Abramović’s own gender politics also fall in line as solidly second-wave feminist.)

The author rightly points out the hypocrisies latent in the willingness to construct “new European identity” both in politics and cinematic representation, from Merkel’s austerity policies to the second-class treatment of immigrant populations in France and Germany.[5] At the same time, Ravetto-Biagioli glosses over veritable human rights concerns in Eastern Europe and Russia, both during socialist regimes and in contemporary politics.

Moreover, the book also uses a number of value terms to qualify its arguments. To use “intellectual” to qualify an argument comes across almost ironic, as one only hears it used, at least in the United States, as a pejorative term on Fox News. At another point in the introduction, Ravetto-Biagioli argues, “filmmakers—better than politicians and political commentators—have been able to engage and understand the recent reconceptualization of Europe’s borders, mythic figures and identity paradoxes.”[6] Unfortunately, the “how” of the “better” is never fully explained by the author.

The text’s strongpoint is the detailed analysis of the films’ mise-en-scène. Immediately after reading the chapter on Russian Ark (2002), I went back and watched the film, noticing shot and lighting details I had missed in the immensity of the spectacle of previous viewings. Unless it was an undergraduate group well-versed in deconstructionist or post-modern theorists, I think the meandering nature of the writing would confuse an undergraduate audience. Though, admittedly, I know few professors who have shown these particular films to an undergraduate class. This text would work best for a graduate level and above audience, particularly in a seminar on European identity or film and the museum or archive.

Andrea Schmidt is an Instructor of Film at Portland State University. She has published on fan fiction in Downton Abbey, and has research interests in literary adaptation and contemporary European cinema. She is currently working on her monograph, Screening the Museum Aesthetic: Auteurs in Transnational Heritage Film.