Film Criticism
“I’m your...” Osamu expected to hear “father” from Shota, but Shota would never call him so (00:34:30).
“Father...” Shota finally called Osamu, as everything returned to a normal trajectory after the police’s intervention (01:50:56).

Written and directed by Japanese film director Hirokazu Koreeda, Shoplifters (2018) won the Golden Palm Award at the Cannes Film Festival this year. The film heated up both Japanese and Chinese cinema markets after it was screened in Japan, Taiwan and China. It was also sold to Magnolia Pictures, which will soon distribute the film in North America.[1] Not many films can achieve both a reputation for good aesthetics and success at the box office. Shoplifters is one of those films, owing to its surprising cinematic language and its protagonist, the great Shibata family, with which the audience emotionally identifies. The Shibata family is driven to the periphery of society by their oppressive social reality. They struggle to experience feelings of happiness and love in their own unique way. This is against the backdrop of the existing dominant sociocultural and political definitions of a “real family” and a “good person.” The family is not biological or patriarchal, but nomadic and collective with strong ties, which I read as an anarchic self-definition of what makes a good family.

The original Japanese title, Manbiki Kazoku, means “a family of thieves”— “Manbiki” meaning “thief,” and “Kazoku” meaning “family.” The first sequences of the film portray “the thief” by showing Osamu and his teenage son Shota collaboratively shoplifting groceries. Then, the camera follows them on their way back to their family. On their way back home, Osamu picks up the five-year old Juri and brings her home to feed her; he has often seen her around, poor and starving. This is a tight-knit family of three generations, living together and in great poverty, but they seem to be satisfied with their current situation. This is the first scene when the family gets together for dinner; however, they are not sitting close to each other but at different corners around the room, which depicts the formally discrete shape of the family’s existence.

Family secrets are gradually unpacked as the camera cuts to separate scenes, each focusing on one of the character’s daily life. The government officer’s visit reveals that the small house is owned by the grandmother, the eldest member of the family, and that Osamu is not her son, which explains why Osamu does not call her “mother” but “grandmother” in the same way the other children of the family do. However, the children do not seem to belong here; the grandmother has to hide the kids when the officer arrives. Thus, one begins to realize that people in this house do not have merely biological connections but are united for some reasons—as Juri, a stranger, is sheltered when the family finds out that her parents abuse and do not look after her. Osamu and his wife Nobuyo are part-time workers with very low salaries; the elder girl Aki is a sex worker; Shota does not go to school but reads books at home. Every member of this family turns out to be marginalized in some way.

However, the family members are not passively accepting this reality; they exist as an alternative force against the hypocritical and cruel facts underlying the sociocultural rules and customary practices privileged with the name of “the legal” and “the natural” that are safeguarded by the police. The old grandmother was abandoned by her ex-husband and his son, but is looked after by Osamu and his wife, who were sheltered by the grandmother. When the grandmother died, they didn’t have enough money to pay for the funeral and had to bury her in the house to “keep grandma company forever.” However, such behavior is deemed by the police to be “discarding the corpse.” “I didn’t discard her, I accepted her when someone else discarded her,” Nobuyo denies the allegation from the police officer. Nobuyo has her own judgement of what is right and wrong; however, “the right things” sometimes conflict with the law. Shota and Juri were abandoned by their biological parents, but were picked up and raised by Osamu, which is indicted as “kidnapping.” For Juri, leaving her biological parents is just like a cicada casting off its old shell. As Juri talks with the cicada, “it is only itching a bit.” It is not painful but itching and getting out of the shell is an exchange for wings, the better living conditions. After the police send Juri back to her biological parents, she is abandoned by them again, and stays at the same corner where she had been adopted by Osamu. As Nobuyo questions the police, “Does giving birth to a child make one a real mother?” The policeman argues, “but she would never be a mother if she did not give birth to the child.” Such dominant normative discourse from the police turns out to be particularly unstable when Juri’s true experiences are encountered. Therefore, the film spares no effort to ironize these privileged “legal” but cold families in comparison to this “illegal family.”

And yet, this is not a family without problems. The first and foremost is “theft,” one of their major sources of income. Juri shoplifts for the first time, ripping out the wire of the burglar alarm to let Shota pass through the store’s front door with the shoplifted fishing rods. However, the achievement of “such a big project” as Osamu celebrates, does not bring Shota any pleasure of success. Instead, it triggers his interrogation of the correctness of stealing things. As they walk along the river after the event, Shota looks as if he is preoccupied, and keeps a large distance from Osamu and Juri while walking parallel to them. This framing makes it obvious that Shota has started to question their recently finished work. It also predicts Shota’s final rebellious behavior of intentionally exposing himself while shoplifting, which then causes the police intervention into the family’s illegal secrets. Through the metaphor of “shoplifting,” the film suggests both the destructive effect of such anarchic embodiment against the economic and political order, and the inevitability of such a family not being embraced by the external world. 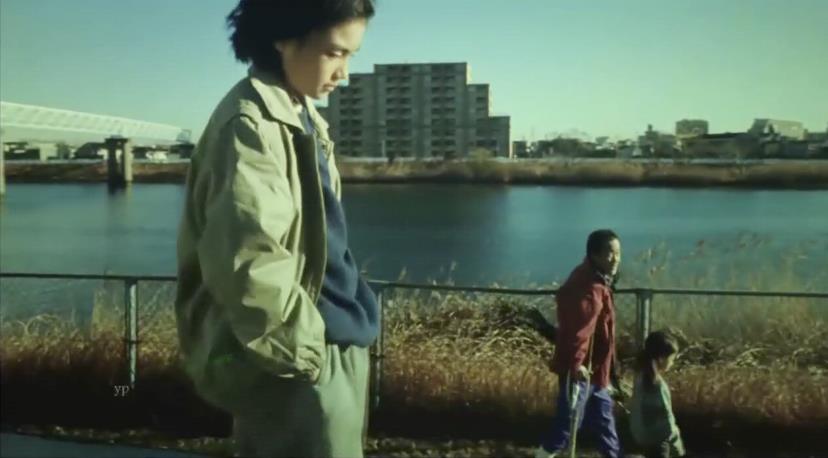 The director makes use of many long shots and shots from tight angles to establish a slow and warm gaze on this family, which conveys deep emotional identification via the camera’s viewpoint. By such choices of mise-en-scėne, the film becomes a beautiful and slowly-narrated tale, the story of an anarchic family in an oppressive world.

Songtao Zhang earned a bachelor’s degree in Literature from Central China Normal University and an M.A. degree in Studies in Comparative Literatures and Arts from Brock University. Research interests include Cinematic Languages, Film History, and the Asian New Wave.