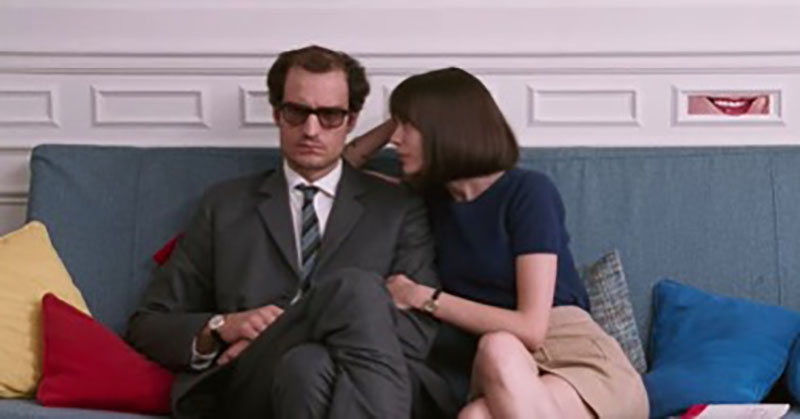 Jean-Luc Godard is now a meme, thanks to Michel Hazanavicius and his coterie of crowd-pleasing, condescending cons who are squarely in the business of vulgarizing history, infantilizing their audience, and spoiling such stuff as dreams are made on. Their newest film is Godard, Mon Amour (2017), and if I were Godard, I’d be horrified, though he of course said it better than me: “Stupid, stupid idea.”[1]

The technique is no different from, say, the repulsive Funny Games (Michael Haneke, 1997/2007): Divert the audience’s attention with shock and wink-wink references, all to service a reductive, unimaginative, embarrassing expression of an inchoate vision. From the very first lines — cringe-worthy voiceovers by Godard and his then-spouse, the French actress Anne Wiazemsky — it’s clear that Hazanavicius knows nothing about his subject and, frankly, neither does Wiazemsky, whose autobiography this biopic is based on with uninspired fidelity.

It’s humiliating to imagine Godard as a one-note fraud like this; we’ve always known that he was a maverick, even a masochist of sorts, but this is the utmost of Hazanavicius’s project, as if he were hedging all his bets on Wiazemsky’s point-of-view and dismissing outright any notion of cinema, revolution, history, and, above all, life itself that Godard has been critically trying to impart. The man is a martyr worthy of veneration; this film finds him nothing but pathetic.

How Hazanavicius conceives and constructs his scenes — especially the intimate ones — conspicuously reveals a lack of imagination, mise-en-scène, and passion towards his subject. There’s literally one shot of Godard making a film, and virtually every scene is, to put it lightly, obscene. In this Tarantinoesque distortion of history, there’s only the glossy surface of portraying youth’s attacks against authority, whether police or a crotchety old man in a restaurant, without investigating what made any of them tick in the first place. There’s only the dismissal of Godard’s own attacks as political mania, without wondering why or how youth — the Dziga Vertov group, for example — fell short of his ambitions as a politically revolutionary filmmaker. Instead there’s only the relentless onslaught of trite cinephile references, empty visual homages, and a typically Millennial pillage of history. Even the jokes and puns (“Salvador Daddy,” Godard’s swinging dick, his glasses) are so unfunny that they beg ridicule, exemplifying how Hazanavicius has no basis for any genuine critique of a master philosopher who is virtually the living icon of critique.

And what to make of his utter fascination with Stacy Martin’s body? The way Hazanavicius films her is a debased counterpoint to how Godard used nudity in his own films, as a medium of protest and critique. Take Godard’s Contempt (1963), for instance, where his producers strongly insisted on hiring Brigitte Bardot, almost exclusively for her famous body, as a means of driving up anticipated profits. Godard fulfilled his obligation in the very second shot, an extended dialogue between a nude Bardot and her costar, Michel Piccoli, about how he feels about her nakedness, thus transforming the scene into a self-reflexive rebuke of the objectification of actresses in the film industry.

Hazanavicius displays no impetus for such criticism. His male gaze is uncritical and blatantly unaware of its own technique. Worst of all, Hazanavicius fantasizes Godard committing suicide because he supposedly couldn’t withstand Anne nor bear breaking up with her. This is a creative license so offensive in the way it allegorizes the death of Godard’s cinema and wishfully imagines his own, but also in how this narrative moment comes on the heels of two actual suicide attempts by Godard’s previous muse and lover, Anna Karina (once upon breaking up with Godard the first time, and again after losing their baby in miscarriage).

“He wants to be serious,” Hazanavicius says, “but you can see sometimes he has a sense of his own comic absurdity [...] even when he’s lecturing you politically.”[2] The fact that he mistakes intelligence and wit for “comic absurdity” only proves how absurd he is as a filmmaker and a thinker. His preference is to sneer rather than abide, yet the irony is that he himself cannot wholly reject Godard’s legacy. As a result, Hazanavicius chooses to mimic only the surface, memeifying that very legacy’s most superficial elements and spitting out a vulgar simulacrum. He later chimes in, “Some people probably think me telling Godard’s story is blasphemy. [...] But he’s not my hero or my God. Godard is like the leader of a sect and I’m an agnostic.”[3] Well, if that “sect” is one of humanity, erudition, sensitivity, and passion, then sign me up; I’ll happily convert, a believer eager to serve as an evangelist.

I don’t repent having watched this dreck. My only regret is that I didn’t stick around to hiss and boo Hazanavicius, who was in attendance. The theater, however, got too hot, my blood was boiling, and I was delirious with fury at the braindead audience. Indeed, there are those who laugh along to this kind of insolent, spiteful attack, those who likely have never seen a non-sixties Godard film, and those who prefer thoughtless yet comprehensible entertainment that ends as soon as you leave the theater. Even the media reactions are baffling; one headline described this story as “the fall of Jean-Luc Godard,”[4] which only outs itself as harboring an unreliable, deficient view of history. But of course, at the end of the day, my fury derives from Hazanavicius, that close-minded hack who gives Godard no credit, denouncing implicitly even his more mainstream films. The upstart’s final message is this: Godard is a phony and a fraud, and if you bought into his pictures, so are you. Allow me to flip the script: If you enjoy Hazanavicius’s milquetoast view of life, history, and cinema, then you’re the phony, and you’re the fraud.

Andrew Baek is a filmmaker and film critic based in Oakland, CA.