Toward the end of Jordan Peele’s Get Out (2017), the main character has been kidnapped, strapped to a brown leather armchair, and forced to watch subliminal messages stream across a 1960s-era television set. One such message is from the public service announcement of the United Negro College Fund: “A mind is a terrible thing to waste.” Though this statement is placed late in the film, it functions as the thematic key for understanding what Peele is attempting to convey with Get Out. Not only is Peele wont to discuss the experience of African-Americans in a post-Obama America, he also exacerbates the paramount fear of humanity in a post-Descartes world: the fear of losing one’s mind.

For Chris, the main character in Get Out, meeting his girlfriend Rose’s parents is what scares him most for much of the film. Though the event of meeting one’s potential in-laws is a terrifying experience for any person, Chris is especially nervous to find that Rose has not informed her parents that he is Black. Peele has claimed in a myriad of interviews that he wishes to tackle the horror that African-Americans face in what he calls the “American post-racial lie.” In other words, Peele wants to portray the anxieties of the Black experience in a country that claims to not see color. Perfectly conveying this sentiment is Rose’s northeastern neo-liberal father who, in a hysterically cringe-worthy line, brags that he would have “voted for Obama for a third term” if given the chance. In Get Out, there is a tangible fear of being outside looking in at White society.

Figure 1.
Chris (Daniel Kaluuya) and Rose (Allison Williams) in Jordan Peele’s Get Out (2017).

To this point, the renowned African-American sociologist W.E.B. Du Bois offers a key conceptual phrase that exemplifies this palpable fear. In his seminal work, The Souls of Black Folk (1903), Du Bois coins the term “double consciousness” to refer to the psychological dilemma which he defines as the “sense of always looking at one’s self through the eyes of others.” For Du Bois, these “others” are the members of a White society who “look on in amused contempt and pity” at their African-American counterparts. While the White characters in Get Out do not necessarily look at Chris with contempt, their fascinated disposition towards him forces him into a constant state of discomfort that eventually evolves into sheer terror. Rose’s parents and their White dinner party guests admire Chris based upon his perception of the world as a Black man, with focus on his physical appearance and stature. 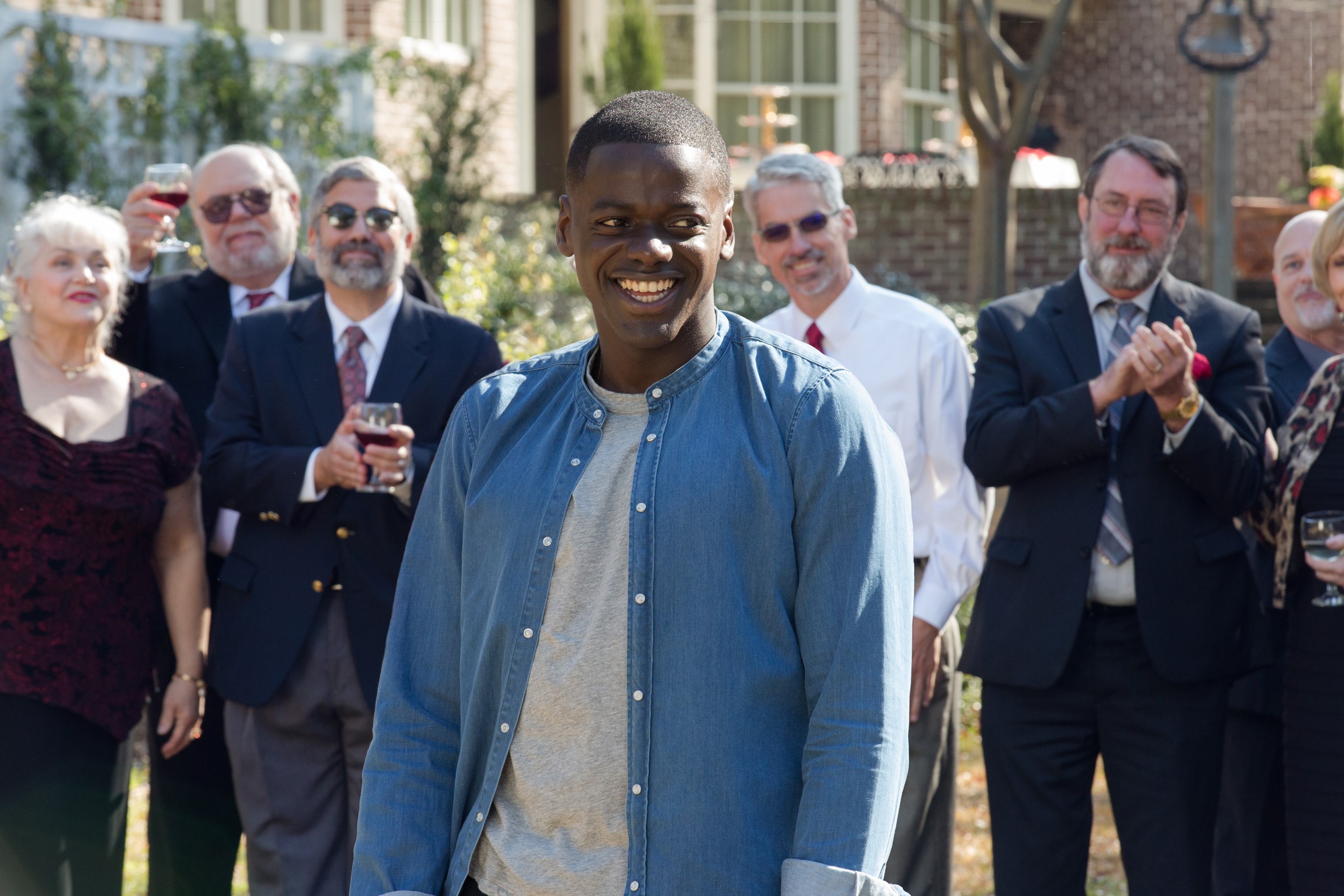 Figure 2.
Chris and his enthralled White onlookers at an outdoor dinner party.

These enamored observations ultimately lead Rose’s father to attempt to swap Chris’ brain with his own to continue his existence beyond death, and to see the world through Chris’ eyes. In frantically attempting to please Chris and to trade awareness and thought with him, the White characters in the film contribute to a new form of double consciousness wherein contempt is no longer the generator of fear; adoration is. Peele shows White viewers the laughable error of their ways in attempting to see color before humanity. While Peele does not wish for race to be compartmentalized into color blindness, he does give the impression that the remedy to the American racial divide is viewing the African-American person as just that: a person. Get Out proves that both disdain for and idolization of the African-American experience causes apprehension in the Black individual.

However, more than tackling race in modern America, Peele offers Get Out as a contribution to the long list of socially aware psychological thriller films. With the White characters wishing to engage in a brain transplant with Black characters, the terror of Get Out is more than a racial fear; it is also a fear of losing one’s mind. Get Out outlines the notion that the very essence of a person rests in their mind; the reason the White characters want the brains of the Black characters is because they recognize that the mind is the hub of the perception of the world and the self. Therefore, the loss of mental clarity and capacity has become the scariest thought in the modern world.

In a world ravaged by mental disorder and inspired by self-help psychology, Get Out finds a welcome home as a distinctly modern horror film. The film’s climax does not come when Chris discovers that his potential in-laws and his girlfriend are, in fact, closet racists; it comes when he realizes that his brain is going to be swapped with a White man, his body implanted with the brain of another. The fright on Chris’ face is beyond words as he realizes that what he treasures will be revoked from him. 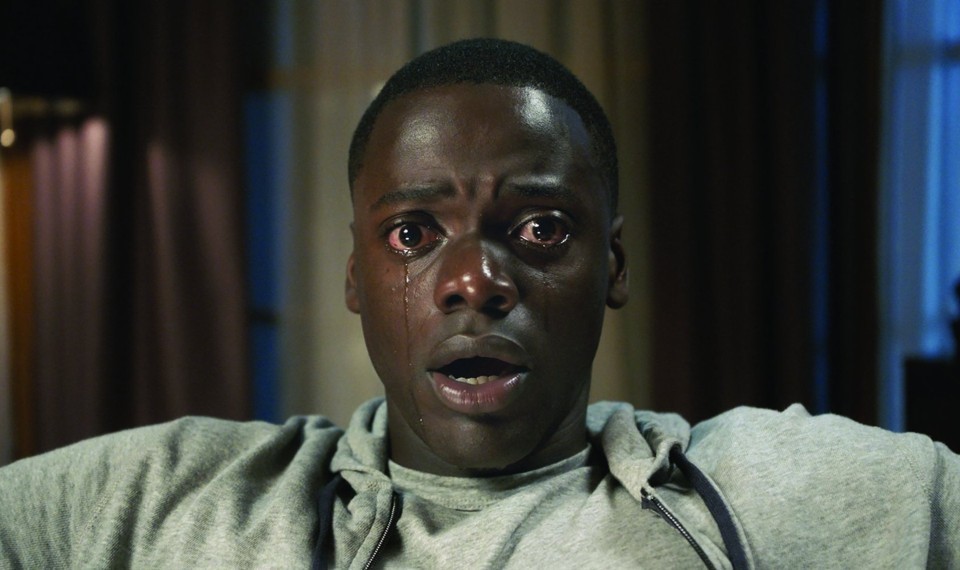 More than when Chris’ brain is to be transplanted, the scene where Rose’s mother Missy hypnotizes Chris furthers the theme of the fear of loss of cerebral control. Using a pristine china teacup (furthering the theme of racial divisions from a socioeconomic standpoint), Missy hypnotizes Chris to the point of utter paralysis. In entering into Chris’ mind through hypnosis, Missy engages in what secretly scares most viewers of Get Out: the use of coercive methods to revoke control over oneself, whether physiologically or psychologically. As in the scene where Chris realizes that he will be the cog in a brain transplant, anxious fear is written all over his tear-drenched face as it appears as though he is not even occupying his own mind.

The look on Chris’ face defines what Get Out sees as truly horrific: the loss of mental control to another, specifically a domineering White individual. It is no wonder that both the scene where Chris is strapped to the leather armchair and the scene where Missy hypnotizes him are oft used as the images for the film’s theatrical posters and promotional material. For Get Out, a mind is a terrible thing to waste, but even more, it is a terrifying thing to lose.

An undergraduate student in theology and philosophy at Anderson University in Anderson, SC, Cameron Hepola is a film critic and academic writer.