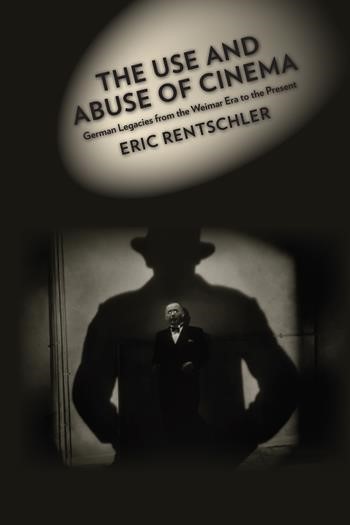 To study European and U.S. culture today, in an era of renascent nativism, is to hear the death knell of the dialectical dream called “progressive history.” In that vision, technological and social evolution struggle bitterly but eventually with success against the forces of regression toward fear and injustice.[1] The collapse of this dialectic, in the most proverbially “civilized” nation in Europe, was what concerned Siegfried Kracauer in his 1947 From Caligari to Hitler: A Psychological History of the German Cinema. In The Use and Abuse of Cinema, Eric Rentschler strives to show us why the disaster that befell culture, intellect, and ethics in 1933 still implicates us.

The Use and Abuse of Cinema is a collection of 20 essays whose original publication dates span 30 years, from 1984 to 2013. Several have been revised for this volume. Rentschler invokes a youthful encounter with Kracauer’s book as the catalyzing moment of his own engagement with the history of film as in fact the history of a certain kind of political unconscious.[2] His book features a fine and partisan essay on Kracauer’s contested legacy, but Kracauer’s project of understanding the cinema as diagnosing the relationship between sociology and myth informs this entire collection.

The Use and Abuse of Cinema includes essays on key theorists (Kracauer, Arnheim), individual films (Das Leben der anderen, [The Lives of Others, 2000], Harlan - Im Schatten von Jud Süß, [Harlan: In the Shadow of Jew Suess], 2008), directors (Douglas Sirk, Rainer Werner Fassbinder, and Alexander Kluge), themes (the idea of “America” in the New German Cinema, historical memory in cinema), and the German film industry (UFA, the Berlin film festival). Dozens of other filmmakers and films are discussed substantively along the way. But it is a series of essays on film cycles (the mountain films, early German sound musicals, postwar “rubble films,” the New German Cinema, and the “Berlin school” of the 2000s) which dramatizes Rentschler’s larger ambition: to reenact and then interrogate the entire history of the German cinema.

Rentschler’s book is not a catch-all. Rather, it is a unifying moralistic lens through which to view a wide range of topics in the history of the German cinema. For Rentschler, the proper “use of the cinema” is as part of a modernist project of ideological analysis through aesthetic defamiliarization. His ideal is the uncompromising political art cinema of Jean-Marie Straub’s Nicht versöhnt (Not Reconciled, 1965), jagged, dissonant, and Brechtian to a fault.

For Rentschler, it is the containment of political reality by the cinema that constitutes the “abuse of the cinema.” In his 1927 essay, “The Little Shopgirls go to the Movies” (perhaps the most concise manifesto of the Frankfurt School view of the mass audience ever published), Kracauer wrote of the need for mass culture “...to satisfy the need for social critique among the customers” in such a way as to contain the implications of that critique and restate capital’s hegemony.[3] Even when Rentschler is praising the minority analytical cinema, it is under the long shadow cast by the hysterical popular cinema. Thus, behind Alexander Kluge’s quiet, deconstructive cinema lurks Veit Harlan’s shrill, paranoid voice.

Occasionally, Rentschler’s broad notion of the “Germanness” of the cinema starts to drag its anchor. His essay on surveillance cinema, “The Surveillance Camera’s Quarry,” takes the modernist aesthetic of disjuncture to an extreme. The surveillance cinema is not only a cinema without a conventional author, it claims to be a cinema without even a narrating voice, the cinema as automatic writing. Paradoxically, Rentschler’s short piece is highly useful on the general subject of surveillance imagery—yet among the essays collected here, it is the most loosely affiliated with “Germanness.” In fact, the history of surveillance in the German cinema extends far back, beyond Das Leben der anderen (The Lives of Others, 2000) at least to the work of Fritz Lang in Das Testament des Dr. Mabuse (The Testament of Dr. Mabuse, 1933), M (1931), and Metropolis (1927). Rentschler would be exactly the scholar to make the link between the literal surveillance imagery of the recent films he discusses in this essay, such as Dreileben (2011), and the long political history of surveillance as an aspect of the German state apparatuses and their representation in film.

Perhaps, however, that is the point: for Rentschler, the urgency of ideas such as those expressed in “The Surveillance Cinema’s Quarry” and throughout The Use and Abuse of the Cinema is that the magnitude of the Hitler era has forever deformed the concept of “the German cinema” to overflow the container of its own nationhood. As Kracauer wrote: “The paralysis of minds spreading throughout Germany between 1924 and 1929 was not at all specifically German.”[4] Writing about that small minority of Weimar-era films which criticized the authoritarian personality, Kracauer warned: “Any nation depends upon critical introspection as a means of self-preservation...”[5] Eric Rentschler shows that whether the cinema is used as a site of that critical introspection or abused as a fountain of mass delusions continues to concern us, not only as scholars, but as citizens.

Kevin Hagopian is an Associate Teaching Professor at Penn State-University Park. He teaches graduate and undergraduate courses in cinema studies, media studies, and pedagogy. He has published numerous reviews, and essays on the Bond parodies of the 1960s, Mexican golden age cinema, and whiteness in 1970s broadcast television, among others.