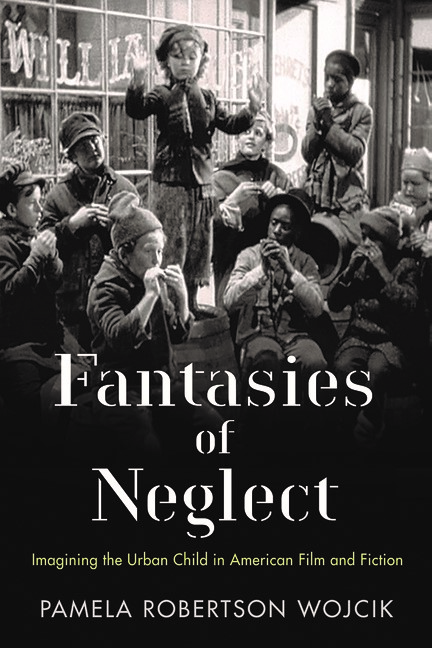 At the conclusion of Pamela Robertson Wojcik’s Fantasies of Neglect: Imagining the Urban Child in American Film and Fiction—an impeccably researched work—the author synthesizes her critical insights regarding fictional representations of the urban child into the following argument: “Imagining disaster...we have imagined our children as helpless victims and sought to contain them.”[1] Prior to this proclamation, Wojcik has spent nearly 200 pages addressing the manifold ways film and fiction have colluded with history and sociology to fuel certain manias about children in urban settings. From the start, Wojcik frames her book as concerned with reading “the spatiality of childhood” in the context of its evocative titular notion of “the fantasy of neglect.”[2] For Wojcik, everything from films featuring Shirley Temple and the Dead End Kids, to black urban literature and film from the 1960s, to the YA graphic novel The Invention of Hugo Cabret (2007) operate around the notion that there’s a dual function to the fantasy of neglect, “that the urban child is a figure of neglect and...the fantasy for the child of being neglected, or let alone.”[3] As her work is concerned with representations of the urban child, Wojcik examines works aimed at both adults and children to “unpack this discourse [of neglect]”[4] in order to “consider the function as well as the image of the urban child and how different fantasies of neglect interact with different fantasies of childhood and the city.”[5] The result is an ambitious cultural studies text that is rooted in expert literary and film analysis.

Fantasies of Neglect is the kind of critical study that one finds less cause to challenge than to endorse in an almost unthinking manner. As you read through its five chapters—or its detailed, captivating introduction—arguments that imbricate theory and history, close readings and facts, almost zip by. Whether analyzing the filmography of street toughs like the Dead End Kids to provide a fascinating counterbalance to real life “movie made” urban youth captured by sociological studies (Chapter 1); or, surveying the career of Shirley Temple in order to complicate both sexualized and innocent readings of her performance (Chapter 2); or, investigating both filmed version of The Champ (1931/1979) alongside Kramer vs. Kramer (1979) in order to show how a mother’s neglect in the urban film is rendered “as psychologically damaging to the child”[6] (Chapter 3); or, exposing the double-standards inherent to illustrations of the black urban child (Chapter 4); or, finally, considering the urge to reclaim our children, surrendered either to neglect or freedom (Chapter 5); Wojcik’s work is astute with its findings and capacious with its evidence.

In fact, Wojcik’s totalizing thoughtfulness may force some readers to anticipate omissions. For instance, for the first half of her work, race appears only intermittently in chapters such as the one regarding Shirley Temple, where her “affiliation with blackness”[7] is briefly addressed only to note the ways it can awkwardly “mask racial interaction even as [such films] covertly represent it.”[8] Given the necessity of addressing the difference of urban childhood across races, Wojcik sets aside Chapter 4 (“‘The Odds are against Him’: Archives of Unhappiness among Black Urban Boys”) to properly address the concerns of black youth in urban settings. In the chapter, Wojcik explores the way certain hybrid texts—for instance, the quasi-documentaries The Quiet One (1948) and The Cool World (1963)—“articulate anger at the way in which social and institutional mechanisms underpin racist practices,”[9] advocating that “we...imagine black and other minority children as mobile and free figures in an urban landscape linked to play and encounter, not criminality or misery.”[10] Even as Chapter 4 slips a bit into banality when it defaults to close readings of the texts, Wojcik’s choice of texts and resultant insights reveal an immeasurable depth of knowledge on the subject.

Perhaps the only genuine concern with Wojcik’s approach is the occasional desultory quality of her ideas—possibly due to her reliance on multiple subheadings per chapter. This is particularly noticeable in her chapter on Shirley Temple; a chapter that otherwise serves as a definitive reading of the showbiz icon. Specifically, in the final pages of that chapter, Wojcik expands her reading of Temple-as-signifier to address less essential readings of Little Orphan Annie, Jane Withers, and The Wizard of Oz (1939). Most peculiarly, her analysis of The Wizard of Oz is built on her appreciation of Salman Rushdie’s “especially smart”[11] reading of the film in such an admiring way that Wojcik allows herself relatively few new insights.

Wojcik’s work finishes in the here and now, with a chapter that assesses Sesame Street, helicopter parents, The Hunger Games franchise, and Extremely Loud and Incredibly Close both novel and film (2005/2011). The contemporary purview of this chapter allows Wojcik to draw a connecting line between her chapters on Depression-era street urchins and post-war, disenfranchised black youth and our present day. Despite her tendency toward the theoretical, one would never accuse Wojcik of being unclear in this chapter or elsewhere—she beautifully traces out a logical trajectory throughout the book. Meanwhile, Wojcik’s undergirding premise of charting and analyzing representations of urban childhood and its various neglects shines through in lucid prose throughout the chapter. Near the conclusion of Fantasies of Neglect, Wojcik ends with what might serve as her work’s thesis, stating, “Our collective nostalgia tells us that children were more innocent in the early twentieth century than they are now, but the discourse on children and representations of them, in films, comics, and popular fiction, tell a different story.”[12] Implied in this argument is the inevitable, uneasy question: are we listening?

Michael Petitti is a Lecturer in the Thematic Option Honors Program at the University of Southern California, where he teaches interdisciplinary courses in writing and cultural studies. His research focuses on exploitation and the American cinema.