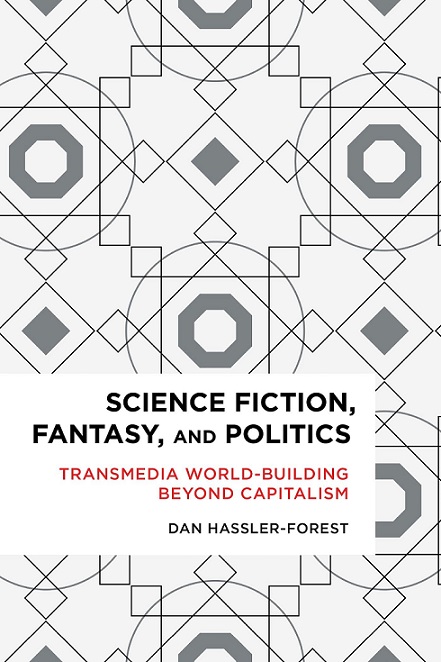 In Science Fiction, Fantasy, and Politics: Transmedia World-Building Beyond Capitalism, Dan Hassler-Forest examines eight “fantastic storyworlds” in order to unpack how transmedia world-building can reflect, reinforce, and challenge capitalism. Using Michael Hardt and Antonio Negri’s 2000 book Empire as his guiding light, Hassler-Forest endeavors to illuminate the ways in which fans use textual worlds as varied as The Lord of the Rings, the Battlestar Galactica reboot, and The Walking Dead to negotiate their place in the current era of globalization. In chapter 1 he makes his case that both “internally coherent storyworlds and the fandom’s radically heterogeneous creative work” are key aspects of global capitalism and it is upon this turn that he incorporates Hardt and Negri’s work on Empire and the “radical potential” embedded in this relationship between fantasy franchises and their fandoms.[1]

Hassler-Forest convincingly argues that the immersive and always-transforming transmedia world-building practices of science fiction and fantasy are particularly useful for negotiating the contradictory logic of global capitalism. In chapter 2 on the Lord of the Rings and Star Trek franchises, he identifies in Iris Marion Young’s idea of a “politics of difference,” which posits a radical heterogeneity as a counter to the conservative social model of exclusion, a productive sympathy with Hardt and Negri’s understanding of the multitude as inherently heterogeneous. For Hassler-Forest, the “creative and self-organizing world of fan cultures” resonates with these concepts.[2] However, this celebratory take on fandom, which has, as he points out, come to dominate academic discourse on fan cultures, must be tempered with an understanding of the degree to which fandom is so often preoccupied with simply reproducing the market logic of mass culture. His example of The One Ring website usefully uncovers the methods by which mass media producers have learned to incorporate the radical imperatives of play and re-production into their own processes of production. He recounts that the One Ring website, created by fans in 1998 to tacitly keep tabs on the production of Peter Jackson’s LOTR adaptation, soon became a promotional vehicle for the studio by giving the website’s owners special access to Jackson’s set.

He further recognizes the inherent contradictions of fans’ use of media franchises as a means of resisting capitalism as closely bound to immaterial labor. The remainder of his book is given over to more case studies of the specific ways in which these contradictions are worked out in a variety of franchises. For example, he sees in Star Trek a tacit endorsement and celebration of global capitalism’s promotion of immaterial labor in the franchise’s technological utopian vision that relies on capitalist mythologies of “individualism, entrepreneurialism, and hierarchal authority.”[3] However, by limiting his consideration of Star Trek’s political ramifications to textual analysis of the original series and The Next Generation, Hassler-Forest does not account for the ways Star Trek fandom has potentially complicated what he sees as the Empire-affirming ideologies of the franchise. Consequently, when he writes later about Hardt and Negri’s notion of “biopower” – “the contemporary hegemony of immaterial labor” – he asserts that this “biopolitical production” creates “new collaborative forms [that]...must operate in constant shadow.”[4] While this assertion rings true, this line of inquiry is forestalled, with no further investigation of what these collaborative forms lurking in the shadows look like in the world of Star Trek fandom. In chapter 3, which focuses on Game of Thrones and Battlestar Galactica, he does just this in a closer look at the vexed relationship between Game of Thrones and its fan culture, a productive maneuver that reinforces the lack of a similar consideration of Star Trek fandom. In chapter 4, devoted to the relatively obscure Starz series Spartacus and The Hunger Games, Hassler-Forest successfully extends his analysis of resistant fandom in a study of the Hunger Games fans’ online anti-hunger campaign that “drew upon fans’ immaterial labor not as a source of free publicity...for the franchise but as a means toward community building and class consciousness.”[5] Throughout Hassler-Forest is tasked with accounting for the fraught relationship between media franchises and their fandoms and in unpacking how fandoms succeed or fail at actualizing resistance to capitalist hegemony. This is predicated on an assumption that fan communities are – or should be – invested in strategies of resistance. In reading the franchises politically, Hassler-Forest also interprets their fandoms in similar fashion. This is a strategy that works when the fandoms conform to what he is seeking (as in the aforementioned Hunger Games example) but, more often than not, he is left reaffirming that to seek anticapitalist rhetoric in these franchises and a subsequent anticapitalist impulse in their fandoms is to enter a cognitive cul-de-sac in which such impulses are both appealed to and circumvented by the very nature of global capitalism. He gestures toward a way out of this in chapter 5, in which he considers the “posthuman turn” in The Walking Dead franchise and the work of pop artist Janelle Monáe, though as he celebrates these texts’ “radical transformation” as a means of transcending the strictures of global capitalism, one wonders how and why Hassler-Forest neglects to relate these ideas to Battlestar Galactica and its radical imagining of a hybrid human-machine world.

In his ultimate mission to better articulate Hardt and Negri’s ill-defined alternative to capitalism through popular transmedia worlds, Hassler-Forest matches his earnestness and optimism with cogent critical acumen and (generally) convincing close readings. While he cannot ultimately resolve the inherent contradiction of mass commodities offering a real solution to the problems of capitalism, his book goes a long way toward advancing deeper reflection on the possibilities of resistance within hegemonic capitalist structures of being. His political reading of these various storyworlds marks a productive turn for transmedia studies, suggesting richer possibilities for understanding the relationship between popular culture and audiences.

Matt Yockey is an Associate Professor of film and media studies at the University of Toledo. He is the author of Batman (TV Milestones Series) (Wayne State University Press, 2014) and the editor of Make Ours Marvel: Media Convergence and a Comics Universe (University of Texas Press, 2017).