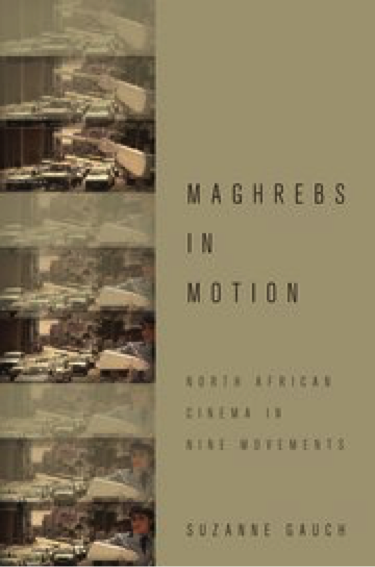 In Maghrebs in Motion: North African Cinema in Nine Movements, Suzanne Gauch uses the framework of mobility in her fascinating study on Maghrebin cinema, revealing the importance of analyzing regional cinemas in relation to their histories and social movements. Not exclusive to physical movement, the author examines how cultural, socioeconomic, historical, local, and national movements are manifested in Algerian, Moroccan, and Tunisian films by nine directors. The films in this book reflect on their respective nations’ cinematic history, all the while gesturing towards new possibilities of film practices on the local, national, and global scale. Gauch argues that national labels are irrelevant in Maghrebin cinema and therefore eschews competition and stereotypes imposed by the French colonial regime. As Gauch notes, the cinema of this region reveals how the nuanced narratives of these films reflect the changing cultural landscape that transgresses borders.

Divided into three sections, “Sight Lines,” “Hero Complex,” and “Scan Backward/Scan Forward,” Maghrebs in Motion invigorates the study of Maghrebin cinema by analyzing a corpus of films that exemplify the inversion of traditional filmmaking styles and the redress of cultural stereotypes. Gauch explains that the films in question “experiment with conventions of perception and established relations on a range of formal as well as thematic levels,” which underscore their transformative qualities.[1] Like the directors Gauch studies, who “dismiss the regional rivalries, easy dualisms, and fetishized signs that were colonialism’s deepest legacies,” the book urges one to move forward, historically and canonically.[2] Following Gillo Pontecorvo’s acclaimed The Battle of Algiers (1966), the decolonial movements in the Maghreb precipitated political instabilities, having challenged national identity and history. As a result, it is important to survey films after the 1960s to assess the movement of Maghrebin cinema.

Each section of the book addresses three cinematic principles respectively: precinematic cultures, reimagination of the perceived locality of popular generic forms, and the Maghreb occupying the center of cinematic history. Gauch curates a set of films that “ignore the boundaries imposed by various national and international film histories.”[3] Attentive to mobile ideas, politics, currency, and cultural influences passing through regional borders, the author provides historical context, formal analysis, and an interpretation of how the films are immobile, hypermobile, static, or contained. Gauch also remarks upon the instances of immobility that affect the production and circulation of the films, and how the characters in the films reflect the kinds of immobility that people in the Maghreb experience.

The “Sight Lines” section of the book, divided into three chapters, looks at Farida Benzlyazid’s A Door to the Sky (1988), Mohamed Chouikh’s The Citadel (1989), Youssef (1994), and Ark of the Desert (1997), and three films by Nacer Khemmir, The Wanderers of the Desert (1986), The Lost Neckring of the Dove (1991), and Baba Azziz: The Prince Who Contemplated His Soul (2005). Each film contemplates the past and present, where national culture and identity are fluid. These films incorporate Islamic influences and recognizable visual elements that emphasize the cultural richness of the region while discarding orientalism. Mobility is embedded at the heart of the texts, as demonstrated in the narratives and the interwoven production, distribution, and exhibition practices. As Gauch explains, the films confounded national and regional representations, due in part to financing and thematic decisions, and thus “exceeded national frameworks”; forging transnational collaborations.[4]

“Hero Complex” examines the visual representation of the local and the national. Gauch observes that deserted regions inhabited by the protagonists in Nabil Ayouch’s Mektoub (1997), Lyes Salem’s Masquerades (2008), and Nadia El Fani’s Bedwin Hacker (2003) are common in all three films.[5] All engage with the trope of surveillance, whereby the characters are rendered immobile under constant watch.[6] Gauch contends that the films challenge post-independence citizenship and address a transnational and global audience, illustrating how they are mobile within the Maghreb and beyond.[7] The three films subvert the generic elements of the hero complex and work within a transnational framework that broadens the scope of reception.

Gauch dedicates the third section of the book, “Scan Backward/Scan Forward,” to films that “reflect a hyperaccurate awareness of cinematic trends and movements worldwide, past and present.”[8] The hypermobility critique that the author raises, concerning globalization through the use of technology, travel, and the circulation of culture throughout the world, applies to Tariq Teguia’s Rome Rather Than You (2006), Faouzi Bensaïdi’s WWW: What a Wonderful World (2006), and Nejib Belkadhi’s VHS Kahloucha (2007). In addition, Gauch acknowledges that through hypermobility, Maghrebin films can generate varying degrees of receptions in the local and global markets. In either case, the films that Gauch analyzes in this section put Maghrebin filmmaking at the center of film history and open up possibilities of looking at how the region’s industry has experienced success (mobility) while encountering challenges in terms of circulation (immobility). The transborder crossings in these films end in tragedy, but it is part of the films’ rejection of conventional narrative structures that show how Maghrebin cinema is in constant motion in multiple directions.

Maghrebs in Motion offers an energizing study of mobility/immobility in Tunisian, Moroccan, and Algerian cinema. Gauch’s unique approach to these often understudied films and overlooked historical moments of the region’s cinematic history compels one to consider how the globalized world mediates mobility of visual texts. Gauch’s book is critical for understanding the role of contemporary Maghrebin cinema in cinema and media studies. That being said, the book covers significant material and does not always delve thoroughly into each movement. For example, Gauch introduces concepts that could be read as constituting its own movement, but earns limited attention. Perhaps this might mobilize readers to engage with those concepts.

Michael Anthony Turcios is a PhD student in the department of Cinema and Media Studies at the University of Southern California. Turcios’ research focuses on transmedia activist work—notably murals, political prints, and video—that critique militarization of police and displacement of working-class people of color via gentrification in immigrant communities of urban Los Angeles and Paris, France.