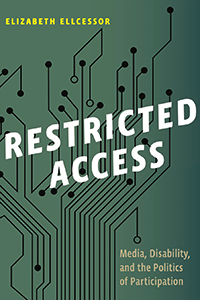 Could the often-celebrated participatory culture be truly egalitarian, progressive, and collaborative without including people with disabilities as active producers, users, and the public of network formation and digital media? This question shapes the main arguments of Elizabeth Ellcessor’s Restricted Access: Media, Disability, and the Politics of Participation, a refreshing and much-needed study of the intersections between issues of accessibility, social phenomena, and digital media technologies. With a multidisciplinary lens, comprising media and cultural studies, disability studies, ethnography, and critical theory, Ellcessor formulates an “access kit” of five specific tools (regulation, use, form, content, and experience) to approach interactions across bodies, cultures, and technologies from diverse angles. Not only does this kit structure the book’s chapters, but it also provides future researchers with a remarkably useful methodology adaptable to their specific interests, case studies, and findings.

The first chapter analyzes the legal and extralegal structures regulating digital media accessibility. Ellcessor underlines the major discrepancy between the legal discourse’s narrow definition of accessibility (a strategy to make the law and standards enforceable) and the diverse experiences of digital media users with disabilities. The extralegal forms of regulation (consortiums, individual companies, and web creator communities) demonstrate more flexibility in their adoption of context-based approaches. Accessibility standards such as WCAG 2.0, for instance, successfully anticipate not only rapid technological change but also a diverse target audience of web creators with varying expertise levels. Yet, despite their visible influence on the industry, these standards lack any formal authority. Furthermore, as Ellcessor indicates, the exclusion of the perspectives and experiences of people with disabilities from the production of these standards itself creates a problem of access. One major shortcoming of all of these regulatory processes is their exclusively technological approach that often overlooks the power structures generating disability and limiting participation in the first place.

In the second chapter, Ellcessor shifts her attention to questions of use in order to analyze how the intended user positions assumed by digital media further the “normative components and political elisions” that define the limits of access.[1] Through an analysis of early web and Web 2.0 commercials, Ellcessor demonstrates how a white, Western, upper-class, computer-literate, and non-disabled public formed the preferred user profile for the then cutting-edge market. The neoliberal rhetoric of “you” employed by Web 2.0, in particular, perpetuated the norm of a digital media user whose identity was constructed through consumption choices rather than social, cultural, economic, and corporeal differences. Here, people with disabilities only emerged as another consumer group. In response to these omissions, Ellcessor points out the impossibility of fully grasping the issues of media accessibility without acknowledging the existence of alternative user positions and uses of digital media.

How the conception and design of material and encoded dimensions of media “determine access and use of a given technology by an individual” constitutes the focus of Chapter 3.[2] For instance, while the assumption that Graphical User Interfaces required less specialized knowledge than their predecessors partly spurred the wholesale adoption of the GUIs on operating systems, in reality these interfaces excluded visually impaired users as well as those who were not familiar with Western office environments. Next, Ellcessor recounts the disputes in the nineties concerning the inaccessibility of “stylish” Flash features to underline the prioritization of functionality over form/aesthetics in the earlier digital media access discourses. If the issue of access emerges as an afterthought in the first two cases, the development of mobile technologies proves that the accessibility concerns themselves may constitute major design criteria. The consumerist implications of the widespread use of mobile devices as assistive technologies aside, this approach suggests the prospect of hardware and software technologies flexible enough to adapt themselves to the needs and preferences of a variety of users.

Chapter 4 unpacks the often-neglected relations between the accessibility and content of digital media. One major issue in this area is the privileging of “information” over entertainment (video games, movie streaming, social media, etc.) in the decisions and regulations regarding what type of content needs to be within reach. Such a hierarchy, Ellcessor maintains, “reproduces social inequalities by extending access only to ‘valuable’ content.”[3] A second set of concerns regarding free speech, sameness and equivalency, and copyrights arise due to the possible alteration of content while making it intelligible to a variety of user groups. For instance, the regulations addressed in Chapter 1 limit themselves to issues of form due to the potential conflict of the regulation of content to circumvent perceived obstacles to free speech and creative output.

In her analysis of the current automation and deskilling of closed captioning that supposedly eliminates nuances in content, Ellcessor aptly calls attention to the possible incorporation of people with disabilities into neoliberal structures of consumerism and depoliticization. This concern that concludes the previous chapter also motivates Chapter 5 and its focus on individual, communal, and participatory experiences of digital media. Her ethnographic research on a “disability blogosphere” provides Ellcessor with “multiple particularities as a source of knowledge from which to gain a broader perspective” on digital media access.[4] Consequently, the author poses the concept of “cultural accessibility,” a term that emphasizes “coalitional, collaborative, and participatory” production of access as an alternative to the neoliberal self-help culture that holds people with disabilities accountable for obstacles produced socially, culturally, and technologically.[5]

Insightful and truly accessible, Restricted Access would appeal to scholars in the fields of disability, new media, and cultural studies. The book could benefit from an expanded appendix comprising a greater number of available digital resources, supplementary information on the interviews and perhaps a glossary of digital media terminology. Ellcessor’s clear arguments and straightforward style, however, largely compensate for this shortcoming and also render the book a great candidate for undergraduate syllabi focusing on disability and participatory cultures.

Ekin Pinar received her Ph.D. from the History of Art department at the University of Pennsylvania. Her areas of interest include modern and contemporary art, cinema studies, history and theory of animation, history of experimental film and visual culture, new media, expanded cinema and exhibition practices, documentary and non-fiction modes, and gender and sexuality studies.