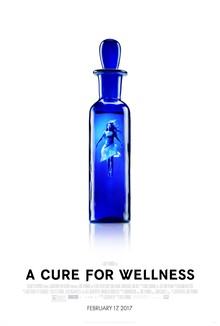 “Stop shoving your beliefs down my throat!” This glaring defense against being fed a string of beliefs that contradict your own is probably the best way to define exactly what Gore Verbinski’s new horror thriller, A Cure for Wellness, is all about.

There have been several well-crafted articles that hit on the symbolic imagery in the film and what message the film is conveying. For example, Sam Cooper’s article for Moviepilot.com entitled “Look Again: The Insane Imagery In 'A Cure for Wellness' Illustrates the Themes Better Than the Script,” breaks down the imagery almost scene by scene and discusses the importance of each. But these miss some crucial elements in the film and therefore the deeper metaphor hidden in the layers.

Critics have panned Verbinki’s film for its obvious imagery and overtly artistic elements. As the film is not an art film, the intense detail paid to thematic scores, sound effects, and visual imagery are, to some, lavish and unnecessary.

The film opens on Lockhart, played by Dean DeHaan, a man ruled by logic and reason, firmly fixed in the modern world. DeHaan plays a heartless, cut to the chase, businessman, tasked by his colleagues to find their CEO, Pembroke. Pembroke is away in Switzerland at a sanitarium. Lockhart heads to the luscious scenery of Switzerland and when he arrives, he is told by his taxi driver that the patients often never return.

It’s in our first meeting with Pembroke that we start to see the underlying message unfold. Verbinski’s use of thematic scores, over powering sound effects, and imagery sets a chilling tone. But, at its heart, A Cure for Wellness is a story of beliefs, of religious ideologies, and of control and manipulation.

Lockhart finally meets Pembroke in a hot spa bath in the clinic. Pembroke descends into a steaming black pool and at the head of the pool is a black altar that Pembroke faces as he talks to Lockhart. You might instantly be drawn to satanic imagery, especially given stories of satanic rituals by a medieval baron given as backstory in the film. However, if we look at the clinic as more of a cult, using promises of health and salvation to control and manipulate, it’s a clearer symbol.

Pembroke submerges himself in the pool after telling Lockhart of the reasons why he left New York and that he hasn’t been “cured” yet. All the patients at the sanitarium are looking for the cure. Pembroke “baptizes” himself in that pool, fully adopting the mythos of the hospital and admonishing all that the modern world offers.

But it’s the eels that seem to garner the most attention when it comes to dissecting the film. The eels are paramount and thematically tie everything together. Cooper theorizes in his article that the eels symbolize the elements we can’t control. He states that they are there to remind the audience of “the unpredictability of the situation and the gray lines in life.” I, however, liken the eels to the embodiment of ideologies, often religious, that contradict our own.

At one point early in the film, Lockhart is swarmed by the eels and nearly drowns because of it. The eels, we then learn, are the key to immortality. And isn’t that what so many religions promise?: paradise, heaven, and life after death. By consuming the eels, the patients hope for a cure, but they are never given it and are instead part of the recipe. The eels are killing them. In this instance, faith, the hope for a cure, has been twisted to manipulate and control. Using faith as a way to power isn’t a novel idea. For as long as man has wanted salvation, there have been those who have profited off that fear and need, sometimes through cults, or by simply pretending to be a genuine believer.

There is one brutal scene in the movie that clinches this whole idea of eels as beliefs and ideologies. It’s when Lockhart, discovering part of the horrific truth of the hospital and the sinister plot underneath, is captured and forced into the “transfusion” room. He has a long tube put down his throat and a canister of eels is then forced into the tube. There we see Lockhart, literally having the beliefs of the maddened head doctor and his sanitarium shoved down our hero’s throat.

At one point, we see the hospital staff, all dancing in flowing white robes, a literal flock of followers, benefitting off the sick patients. In another scene, Lockhart tries to get the patients to see that they are not being cured but are paying to get sicker, literally having their life force sucked out of them. Instead of seeing the truth, they crowd Lockhart in protest. Try telling someone their beliefs aren’t real, and see where you get.

Lockhart does eventually escape; his life has a purpose and he succeeds in burning the sanitarium to the ground, but not before witnessing some of dead patients’ corpses consumed by the eels. This is a sort of life of after death, you might say.

After running away from the burning debris, co-workers from the New York firm find Lockhart and demand that he returns. He does, a changed man. Although he saw the hospital for what it was, he still realizes that going back to his modern life is no answer either. As the film suggests multiple times, “You can’t un-see the truth.”

A Cure for Wellness is not to be taken objectively. One interpretation leads to a dozen more. Seeing the film as an allegory for reason versus faith and being forced to adapt beliefs that aren’t your own isn’t a stretch. But it is simply one interpretation. Whether critics rate the film as good or bad, Verbinsnki has brilliantly created an open-ended puzzle of a film with dazzling visuals and skin crawling elements of horror.

Kay Vandette is a freelance travel writer, blogger, and film critic. She especially enjoys analyzing horror films and often writes critiques on pop culture with a feminist bent. She is a Wisconsin native and is currently working on promoting local areas; but, writing about film and literature has always been her passion.

1. Sam Cooper. “Look Again: The Insane Imagery In 'A Cure for Wellness' Illustrates the Themes Better Than the Script.” MoviePilot. 20 Feb. 2017