Film Criticism
The crisis consists precisely in the fact that the old is dying and the new cannot be born; in this interregnum a variety of morbid symptoms appear. — Antonio Gramsci

Debuting in 2015, Forged in Fire is ostensibly part of The History Channel’s stable of “working class” reality shows (e.g., Ice Road Truckers, Swamp People). However, in a 2015 Esquire article, producer Tim Healy freely admitted his knife-making craft exhibition was modeled on cooking shows like Iron Chef and Chopped. Indeed, the format of Forged in Fire is almost identical to Chopped – with the emphasis on bladesmithing having more panache as far as attracting History’s target audience (i.e., working-class males).[1] In other words, Forged in Fire is not a reality show per se but a competition show where a pristine kitchen, culinary arts, and tasty dishes are replaced by a grimy forge, industrial arts, and lethal weapons.

On Forged in Fire, four blade smiths compete in “the Forge” in two preliminary rounds lasting three hours each to manufacture functional knifes with specific parameters (variations have included a hatchet and a bayonet). One contestant is eliminated after the first round in which the blade itself is forged out of raw steel. The losing artisan is usually expelled for design flaws or failure to adhere to the requirements of the challenge. For added measure – and in keeping with the masculinist tendencies of shows on the History Channel – the eliminated contestant(s) must suffer the public indignity of relinquishing their failed weapon to the judges as an act of symbolic castration.

The second round consists of three contestants converting forged blades into fully-functional weapons with handles and other design enhancements and/or requirements. These finished weapons are put through a series of tests: a weapon that breaks or suffers some form of “catastrophic failure” is immediately disqualified; one that performs exceptionally badly such as blade chipping or an inability to cut adequately is the likely candidate to go; if all three pass the tests, the one that performed least efficiently as deemed by the judges is eliminated.

The two finalists are sent to their home forge with a five-day deadline – in other words, a standard work week –to produce a functional historical battlefield weapon from around the world (a Scottish claymore, a Roman gladius, or an Indian haladie). These weapons are put through another series of tests –sharpness, strength, and often a graphic “kill test” on a ballistic dummy – and the winner receives a $10,000 prize based on their utilitarian performance, historical accuracy, and the smith’s aesthetics: usually in that order.

On the surface, Forged in Fire compares to Swamp People and Ice Road Truckers as far as its valorization of “the working class” and “the dignity of labor” in the face of adversity. The difference is that these other shows represent working-class experience as a perpetual and, rather literally, daily life or death struggle of economic survival – be it the hazards of hunting alligators in the Bayou or transport in the Canadian-Alaskan tundra. As a workplace competition show, Forged in Fire contestants struggle against the clock, potential heat exhaustion, or a possible workplace injury. In one episode, a contestant was eliminated during the first round when he was showing symptoms of a heart attack and had to be taken to hospital – an incident which prompted Forged in Fire host Wil Willis to enthusiastically exclaim, “This Forge breaks people down!” 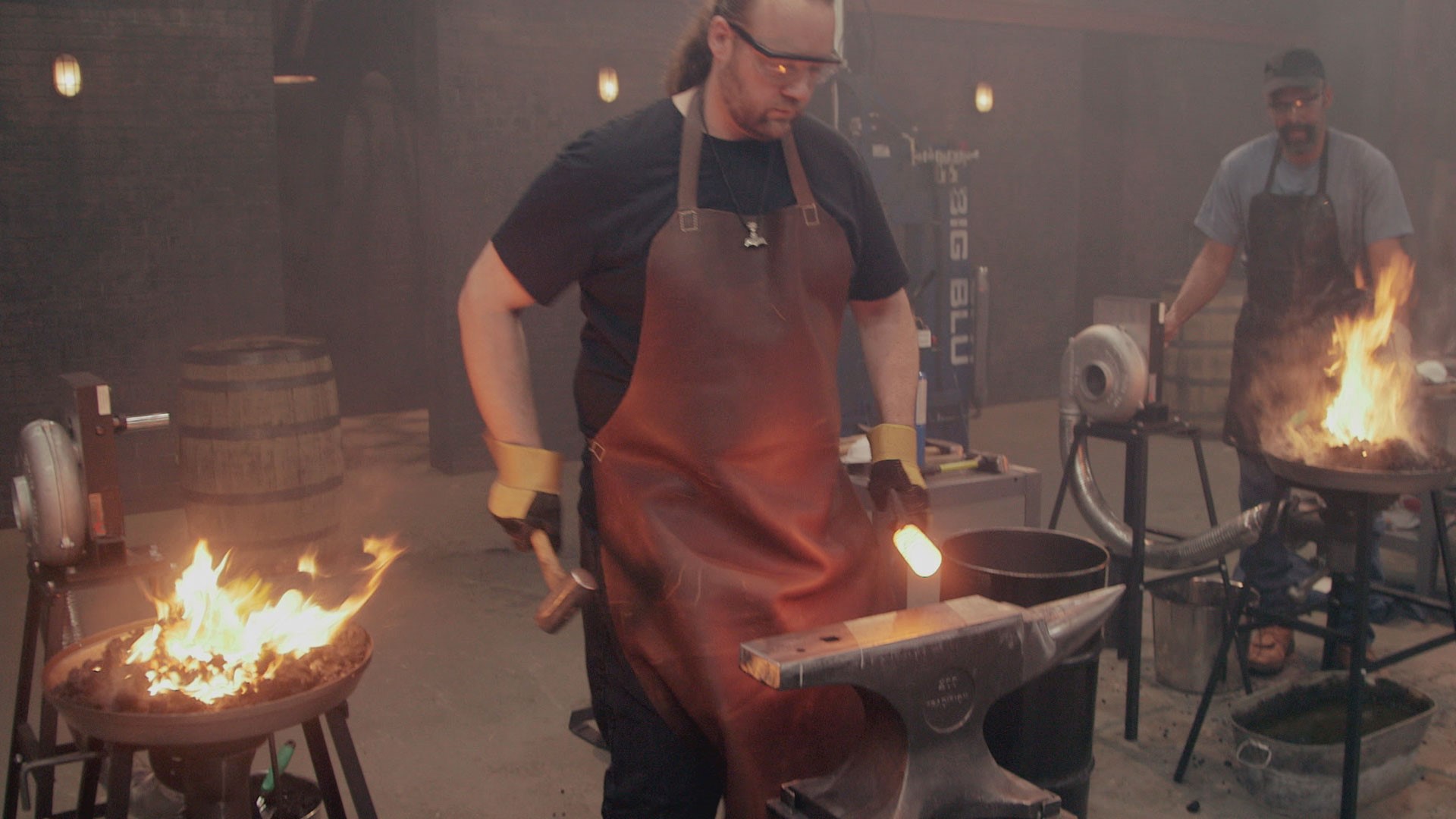 Sweat shop: Blade smiths working in “the Forge” on Forged in Fire

In this respect, the competition show format allows Forged in Fire to focus strictly on a specific type of craft labor and, by extension, provide a contradictory study in commodification. In Capital, Volume One Karl Marx wrote that “a use-value or useful article...has value only because human labour in the abstract has been embodied or materialized in it.”[2] Forged in Fire is a painstaking chronicle of the stages of individual and physical labor that “transforms” chunks of steel and wood into a knife, sword, axe, etc. This “useful article” must demonstrate that it is the most useful article produced in the Forge.

Marx further contended, “A commodity presented to us is a complex of two things – use-value and exchange-value... Commodities come into the world in the shape of use-values, articles, or goods...They are, however, commodities only because they are something two-fold, both objects of utility, and, at the same time, depositories of value.”[3] To this extent, on Forged in Fire the use-value of not only the blades but the bladesmiths is (over)determined via a rigorous series of evaluations and tests. Just as the weapon must not suffer catastrophic failure and break, it is incumbent on the worker to not suffer catastrophic failure and “break down” physically and/or mentally during the production process, as in Charlie Chaplin’s Modern Times. The conclusion is the moment the use-value of labor itself is converted to exchange-value. This is not signified by a real or imaginary price tag placed on the weapon but when the bladesmith wins the prize money for a “job well done.” In other words, Forged in Fire chronicles the process of weeding out the blade smiths with less “use-value” as “objects of utility” within the Forge until the one remaining becomes the sole “depository of value.”

This is paralleled by how Forged in Fire operates as a hermetic world in its conditions of production. “The Forge” spans the antiquity of the Iron Age – arduous physical labor defined by muscle, hammer, and anvil – to the Second Industrial Revolution with the addition of electric blowers and grinders, hydraulic presses, and table saws. The cell phone and the personal computer, the staples of postindustrial capitalism in the 21st century, become conspicuous in their complete absence on Forged in Fire. The Forge becomes a workplace-stage that both nostalgic and anachronistic. As much as it represents a rugged space of workplace production, the Forge represents a romanticized time in its depiction of work that is steadily archaic in the late 20th and 21st century. The grand prize is awarded to the representation of the “industrial worker” – in both senses of the term – who produces the best artifact of by-gone eras and modes of warfare.