Television sitcoms and dramas of the 1950s share more with the theatre than their cinematic counterparts. Films had the luxury of setting scenes in multiple locations—interior or exterior—with more use of coverage (shots from multiple angles), while television programs were restricted to interior locations on soundstages. The blocking of the actors looked more “stagey” and less natural, particularly when displayed on film. The reliance on the rising “method” actors of the era also contributed to the theatricality of post-war American television. As the years progressed, most post-modern sitcoms and dramas came to look more cinematic in their presentation than in past shows. The political drama House of Cards (Netflix, 2013- ) retains the current cinematic trend found in television, but pays homage to theatrical techniques of the past.

The program uses techniques and themes commonly found in the plays of Shakespeare. Recurring in the Bard’s work are the universal themes of betrayal, revenge and manipulation. While every drama found in film, television and stage use these themes, what sets apart House of Cards is making the show a tragedy in the traditional definition of the word. Tragedy is not something that is really sad; tragedy occurs in a drama when someone of high status falls.

Frank Underwood (Kevin Spacey), an ambitious Democratic congressman from South Carolina, aims to rise in power in Washington, DC. With the support of his equally ambitious wife, Claire (Robin Wright), the Underwoods employ any means to achieve that power, finding ways to betray and control those in their path, even if that thirst for power means committing murder. 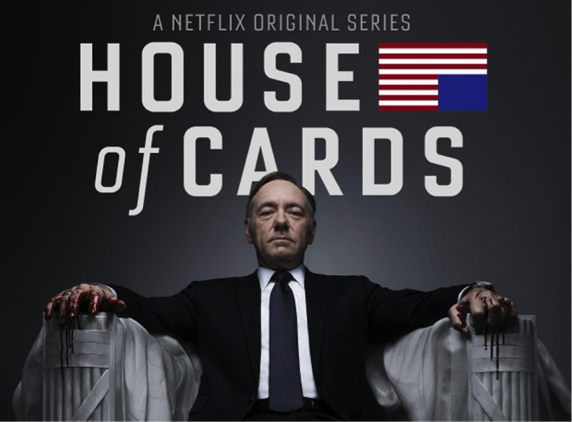 Figure 1.
Frank Underwood sits at the chair of the Lincoln Memorial like a king on his throne. Notice the blood on his hands, and the inverted flag.

The groundwork for the use of tragedy as someone of high status to fall is hinted at early, indeed, in the show’s pilot. Season one commences with the inauguration of a new President. Denied a promised Cabinet position, Underwood dedicates himself through the course of the first season to get revenge by orchestrating elaborate schemes to climb his way to the top, with the ultimate goal of shaming the President. It is here where the program utilizes the original definition of tragedy, much like a king found in Shakespeare’s work; Underwood aims to oversee the fall of the US President.

In order to achieve this, Underwood convinces the dissatisfied Vice President to resign and go back to his original post of Governor of Pennsylvania (after a failed campaign for a new one), and Underwood assumes the role of Vice President, gaining the President’s ear. Through the course of season two, Underwood uncovers a scandal involving the President and a billionaire. This billionaire has a sizeable influence on the President. When this relationship is made public, the President is disgraced and impeached, leading Underwood to the presidency. This storyline borrows heavily from Shakespeare’s Macbeth, where characters eye the throne, rise to power through manipulation, and ultimately the ruler falls.

Aside from its use of these classical Shakespearean themes, the show also demonstrates classical theatrical techniques. House of Cards, as stated earlier, adheres to the post-modern use of cinematic practices in television (location shooting, amount of coverage and naturalistic blocking). Furthermore, House of Cards employs another theatrical technique virtually absent in other television drama: the breaking of the fourth wall.

Underwood regularly breaks the fourth wall to engage with the viewers over various story points. His direct address habit ranges from snide remarks to contemplation on what to do when upsetting news is revealed to him. Shakespeare routinely used this with tragedies like Hamlet, as Hamlet speaks to the audience with the famous “to be or not to be” soliloquy, or in his comedies like Much Ado about Nothing, when characters speak to the audience as a way of inclusion on the trickery. While fourth wall breaking can be found in iconic films such as Annie Hall (1977, Woody Allen) and Ferris Bueller’s Day Off (1986, John Hughes) for comedic effect, the practice is largely absent in film and television dramas. The use of fourth wall breaking, as with the use of tragedy, continues to elevate the program’s Shakespearean scope. 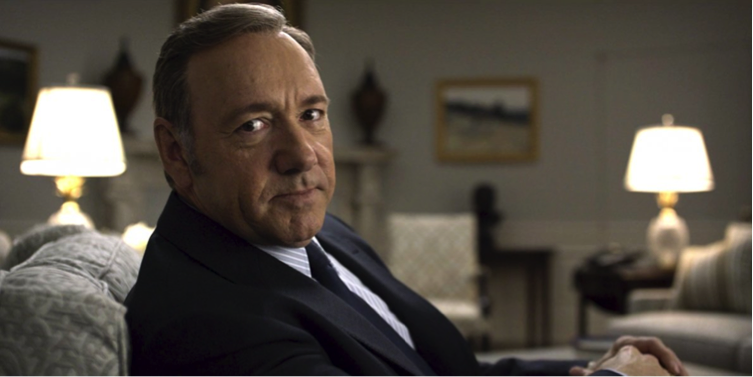 Figure 2.
Underwood turns toward the camera to share his thoughts with viewers.

Though Shakespeare is an English playwright, many of his plays were set outside of England. Othello and Romeo and Juliet are set in Italy and Hamlet is set in Denmark. Shakespeare’s audience demanded stories set in exotic locations completely foreign to them. House of Cards places itself in the political realm of Washington, D.C. The inner workings of Congress, the White House and its procedures are in itself exotic and foreign to the average American citizen.

In this sphere, the Underwoods aspire to run Washington as their own kingdom. Rising in power remains a consistent theme throughout the entire run of the show. With the District of Columbia serving as their kingdom, the Underwoods adopt behaviors that are kept secret from voters. As with royalty, the American voters become subjects, not privy to the inner workings of the monarchy. These members of high society, as during the Renaissance, followed their own codes of conduct.

Like Shakespeare, House of Cards relies on character complexity, particularly in its representation of Frank Underwood; for example, the writers emphasize his bisexual leanings. His relationship with a former schoolmate is known only to his wife (she herself was involved in an open affair with a famous photographer). During Frank’s time in Congress, he and his wife engaged in a three-way sexual relationship with his bodyguard. All of these actions are done in private, away from the knowledge of the public. Such activities went on during the Greek and Roman Empire, whose plays influenced Shakespeare, and in the Renaissance court itselt. Sexual activities went on behind closed doors among the powerful, with their status protecting them from scrutiny, with the Church complicit. The societal norms of the Renaissance era show that these kinds of secrets still go on in contemporary America, the powerful forever secluded in their kingdoms.

With an upcoming fifth season in the works, House of Cards continues to resonate with viewers. Its political intrigue and scandalous subplots engage Shakespearean storytelling to profound effect. As with many programs of its ilk, the success of House of Cards could spur a new wave of traditionally tragic characters set against a contemporary backdrop.