Zhang Yimou’s latest film, The Great Wall doesn’t amount to much more than what it advertises in its trailer, which is Matt Damon stylishly shooting dragon-like creatures on the Great Wall. From the first appearance of the foe (mythical alien creatures sent to avenge the greed of an empire) to hearing William Garin’s (Matt Damon) unnatural accent delivering lines like, “The moon is strong,” it became clear that the film wasn’t going to be winning any Oscars. The Great Wall didn’t fail due to lack of resources, as it had world class talent supporting its directing, acting, writing, producing, and financing. The film simply lacked cohesion of these elements and tried to do too much, which amounted to a hybrid Sino-Hollywood co-production that was unoriginal and outdated in content.

Zhang, who is best known internationally for his visually rich Chinese martial arts films Hero (2002) and House of Flying Daggers (2004), had hoped The Great Wall would bring back international blockbuster status where a few other Chinese films starring Western actors have failed, namely The Flowers of War (also directed by Zhang Yimou and starring Christian Bale) and Return to 1942 (directed by Feng Xiaogang and having supporting actors Adrian Brody and Tim Robbins). Both were beautifully-shot historical films, but were extremely dark in content and failed internationally. By giving The Great Wall the setting of one of the most famous monuments in the world, adding some fantasy elements, and getting the commercially successful Damon on board, Zhang was able to bolster the film’s spectacle, but alas not its substance. Despite the talented writing team behind this film, they weren’t able to weave all of these elements into an original plot that had any depth and continuity.

While there are some nice long shots of the Chinese landscapes littered throughout the film, the setting is much too focused on the Great Wall itself, taking up seventy out of its ninety minute running time. Once the queen of the Tao Tei (the name of the alien foe) reveals herself, the audience can anticipate the film’s ending, as it is strikingly similar to the plot of Independence Day (1996) and Star Wars: Episode One (1999). As the images below demonstrate, it is quite apparent that the larger action sequences, setting and even some of the costumes of The Great Wall are reminiscent of the Helm’s Deep segment of The Lord of the Rings: The Two Towers (2002).

While the sound and special effects are far superior to recently successful Chinese made films, such as Monster Hunt (2016) and The Mermaid (2016), they fail in comparison to what director Peter Jackson was able to do fifteen years ago, despite the new film’s reported $150 million budget[1]. In fact everything from the director, writer, plot, setting, main actor, supporting actors (Andy Lau/Willem Defoe), and even the dysfunctional pseudo historical/mythological genre (The 13th Warrior [1999] and Alexander [2004]), seems like a highlight reel from at least a decade past. 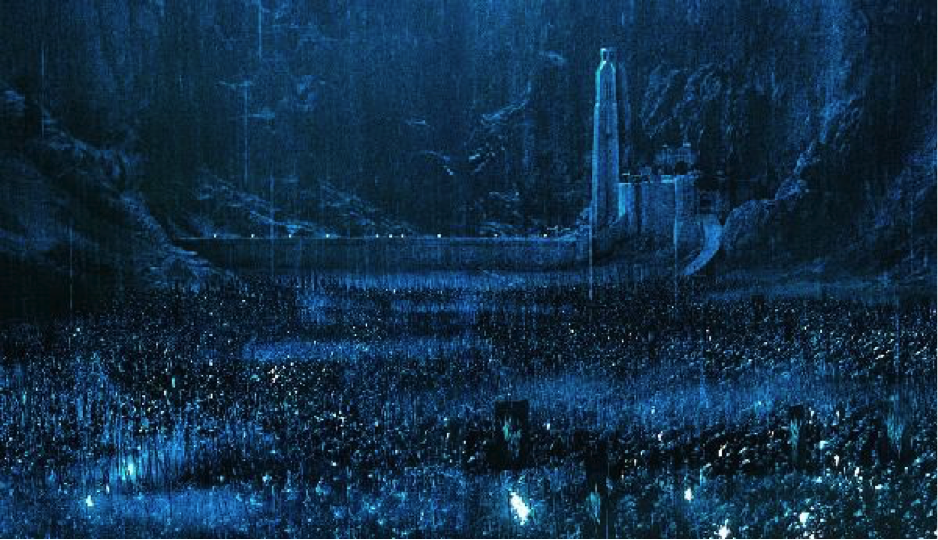 Figure 2.
The Tao Tei attacking in The Great Wall

Unlike Crouching Tiger, Hidden Dragon, the paramount Asian adventure film, the director and production company, Legendary East, decided to use a completely Hollywood stable of story and screenwriters, including Edward Zwick and Marshall Herskovitz, who collaborated on another successful Asian saga, The Last Samurai (2003). With so much history surrounding the actual Great Wall during the Song Dynasty (960AD-1279), roughly when the film could have been set, the logic behind making the Tao Tei the antagonists trying to breach the Wall was a bit of a head scratcher. The decision to not use a fictionalized account of an actual historic battle, which Netflix’s recent series Marco Polo or Zwick’s The Last Samurai have proven works, was disappointing. This could be an example of where Zhang, who admits to always worrying what will pass the censors[2], and the writers were trying to pacify the other Great Wall of China built by the SAPPRFT[3], which controls all content being distributed in China.

The Chinese real estate and now media conglomerate, Wanda Group, which recently bought Legendary Entertainment, showed their fingerprints all over the script as the writers conveniently incorporated several Chinese government-approved “publicity” themes throughout. An example of this would be the central portrayal moral fortitude[4] as we see the evolution of the mercenary Garin (Damon) who is helped to find his moral compass by the beautiful Commander Lin Mei played by Tian Jing. The actress, who not surprisingly is already slated to appear in several other Hollywood films such as Kong: Skull Island and Pacific Rim: Uprising, as having a Chinese star satisfies one of the rules for entering the Chinese market. By no coincidence, the film centers on a scene where Garin, the foreigner, has to trust Lin Mei and take a “leap of faith” by diving off the Wall in order to save the day. The audience will note that the film highlights China’s invention of the “black powder” and how the Chinese army, despite having a non-realistic female division, is portrayed as organized, immaculately clean, and powerful.

The Great Wall is notable for bringing forward a new template of formulaic, stamped for approval, Sino-Hollywood co-productions, however the movie itself is not much other than that. Just a month after the release of The Great Wall, Wanda Group decided to let go of Thomas Hull, the founder and CEO of Legendary, which may be a positive signal for the future. As China is set to become the largest film market in the world, and Chinese firms are investing heavily in Hollywood, expect to see more films like The Great Wall try to cross the trans-Pacific media barrier.

Mac Sullivan is a Ph.D. candidate in Political Aesthetics at East China Normal University in Shanghai, where he has been working and studying for the past seven years. He works full time in international trade, and spends his summers as a visiting professor at Tongji University.