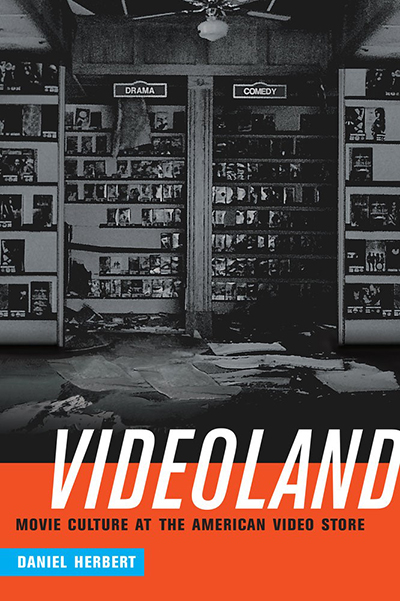 Spaces that once hosted an American cultural routine, vacant video stores have long been replaced by other enterprises. Across the dust-encrusted shelves of this once ubiquitous institution, Daniel Herbert’s Videoland: Movie Culture at the American Video Store examines the transformation of movie consumption and how various practices that nurtured the industry subsequently led to its demise. Despite this ominous context, those interested in an accessible history of the video rental store and its impact on media consumption will find this work compelling and insightful.

Herbert introduces the three parts of Videoland by summarizing theories of taste and space that inform his analysis, citing Pierre Bourdieu and David Harvey as primary players in this regard. To gather material for his work, the author engaged in a cross-country survey of 200 video rental stores at about the same time many of their owners had been struggling to maintain their operations. Herbert’s methodology is here described as an examination of the various strata that construct the video rental store as a space where movies are distributed, evaluated, discussed, and consumed. For the author, it is the very act of consumption – not the lack thereof – that has contributed to the decimation of this once dominant cultural industry.

Chapter one of Videoland provides a succinct yet exhaustive account of the video rental’s birth and transformation into its current incarnation. The author here distinguishes video stores as falling along a short spectrum – from the highly influential uniform corporate model to the more eclectic independent model. Despite this diversity, the author describes video stores as becoming the “material and spatial embodiment of Americans’ desire for selectivity and geographic convenience in movie viewing.”[1] For Herbert, this commodification of cultural goods (as with books and music before) fostered the consumer’s sense of entitlement to an individually tailored browsing experience.

The appearance of the Redbox kiosk that closes the first chapter is an uneasy segue into the question Herbert asks to open his second chapter: “[what] is a video store?” In “Practical Classifications,” the author illustrates how the layout of the retail space is driven by the tastes of store owners and employees. It is here, in the classification and cataloging of film, where the author foretells the data-driven, individually tailored industry we have today. Although shades of the video store’s demise loom, Videoland’s overview of video rental’s history makes clear that the increased access and consumption of movies spurred the development of data-driven distribution that ultimately became the backbone of current film consumption.

In the second act of his work, Herbert examines the ways in which video stores reflect and respond to their surrounding communities. The third chapter, “Video Capitals,” looks at those unique stores whose eclectic catalogs appeal to the selective film viewer. In these spaces, the fandoms of those behind the counter combine with the educated tastes of the consumer to create a unique video rental experience. It is here that the retail space is designed by diverse attitudes toward film viewership. From the hipster-havens found in college towns and metropolises, the fourth chapter turns toward the rural operations that are more likely to privilege the blockbuster over the avant-garde. For Hebert, the significance of these operations is that they serve as social hubs for the surrounding community. In addition to offering easy access to movies in geographically remote areas, these outlets provide information for happenings and events taking place throughout town.

In both the third and fourth chapters, Herbert offers an impressive body of data culled from interviews with the owners and employees of these establishments. The richness of these interviews, however, highlights the absence of the customer within these spaces that were once energized by their browsing and interactions with staff. Considering these cultural capitals and community hubs, we are compelled to wonder whether the video store was ever important in the first place. Perhaps to avoid focusing on the well-tread discussion of video rental’s doom, the customer had to be exorcised from Herbert’s work.

This elusive consumer is evidenced in Videoland’s third act but only as a source of data and fodder for monolithic distributors and movie review publications. Providing a source for the categorization and region-specific targeting employed by rental store operators, the fifth chapter delves into the overlooked practices that make up distribution. Herbert implicates monolithic wholesalers for reducing the video to a commodity possessing “value comparable to any other good.”[2] “Movie culture,” Herbert argues, “was no more special than anything else that could be delivered and sold at a grocery store or pharmacy.”[3] As fashionable as it might be to place the blame squarely on the corporation, Herbert situates the popular critic as equally complacent in the reduction of film to quantifiable data. In “Mediating Choice,” the author describes how popular video guides led to online services offering similar advice. Herbert points out that these convenient online services provided distributors with the means to circumvent the video store. Through streaming services, rentals by mail, and storefront kiosks, distributors could redirect traffic to individuals desiring convenience and expedience.

Videoland’s “Coda” features numerous images of vacant video store interiors, a haunting memorial to a dilapidated American routine. Although these dusty shelves are never far from the periphery of Herbert’s focus, his work is a satisfying tour through a cultural practice that is increasingly viewed through nostalgic lenses. Throughout his invigorating exploration of the stacks and storerooms of the video rental industry, Herbert seems to favor the independently run, eclectic stores that prioritize people over profits. In Videoland’s closing pages, however, the author seems to wonder whether these stores will be saved by the very communities they have worked to serve.

As a doctoral student with the English department at UW-Milwaukee, Kristopher Purzycki is primarily invested in digital media studies. His current dissertation work involves the composition of cultural identity through digital space by under privileged communities as way of complementing reductive, data-driven representations.