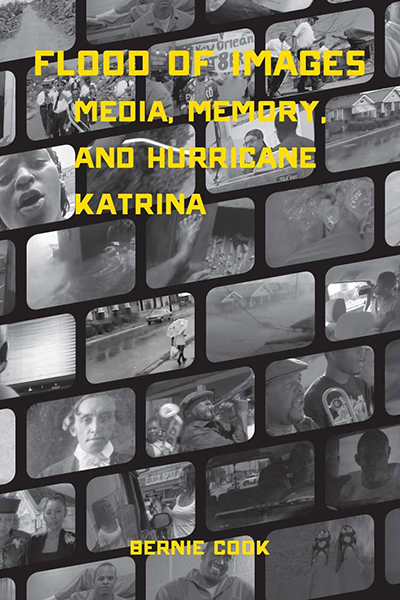 Bernie Cook’s Flood of Images makes an intriguing contribution to studying Hurricane Katrina as a media event, by articulating the ways in which the media’s coverage constructed our national memory of the storm. Cook’s meticulous examination of the media coverage throughout the storm, including specific case studies on Fox News, NBC, and CNN, reveals the ways the news constructed a troubling narrative about New Orleans, its residents, and the failures of government intervention. The book is broken down into three sections—news, documentary, and fiction—which move us from the onset of Katrina to the ways the storm and its aftermath have lived on in popular culture texts.

Cook’s attention to detail and formal analysis helps make a series of key points about how the networks constructed Katrina, arguing for “the impact of visual rhetorics on representations of Katrina.”[1] For instance, in an early chapter on Fox News’ coverage at the beginning of the storm, Cook notes how anchor Shepard Smith converted New Orleans into a dead city, rather than a city that was struggling to survive in the absence of governmental aid. He details how Smith constructed a horrific staged reveal—one likely practiced—of a dead body on an overpass for maximum drama. Here, like elsewhere in Fox News’ coverage, Cook writes, the network’s “ideological work to convert New Orleans into a dead city is revealed in its own production process.”[2]

In an intriguing intervention, Cook situates the coverage of Katrina within the historical and political moment of the Bush administration, September 11th, and wars in both Afghanistan and Iraq. Cook tracks the conversion, via news coverage, of New Orleans residents from victims to enemy combatants, a narrative arc that drew on conventions of war coverage: “The end result of this conversion of American citizens into enemies can be seen in incidents like the Danziger Bridge shooting, where police fired on unarmed civilians, killing two men.”[3] As Cook illustrates, this kind of narrative likely resulted in “missed opportunities to save dying citizens.”[4] Amidst a national conversation about police violence and the role of police in communities across the country—and especially communities of color—this intervention feels both extremely relevant and timely.

The second section of the project delves into documentary representations of Katrina, such as When the Levees Broke, Trouble the Water, and A Village Called Versailles, among others. These documentaries built upon and often re-thought the memory of the storm crafted by television news. Cook asserts that documentaries like Levees can provide a “prismatic understanding of events” and are “deeply interested in historical questions” rather than reporting and prioritizing the present, as television news does.[5] Cook situates his early discussion of Levees on one particularly disturbing example: naming the dead via an analysis of the coverage of Ethel Freeman’s body. If in the news coverage, Freeman’s body stood in for the broad “consequences of Katrina,” Levees “return[ed] her body to history and specificity. While it uses her story to convey the suffering and death caused by Katrina’s aftermath, it does not reduce her body to a symbol as television news had done.”[6]

Cook asserts that documentary “offers an array of voices and perspectives missing from television news coverage” and so intervenes in those memories produced by the news coverage.[7] Nowhere is this clearer than in Cook’s discussion of A Village Called Versailles, which looks at the response of New Orleans’ Vietnamese-American community during and after Katrina, a community ignored by both mainstream media coverage and the other documentaries he discusses. For Cook, Versailles thus intervenes in the “black/white binary” that dominated Katrina coverage and the storm’s subsequent meanings.[8]

The final section of Flood of Images spends ample time on Treme (2010-2013), which, as Cook points out, occupies “more space than any other single representation or group of representations” about Katrina.[9] Framing this section is a discussion of Treme’s claim to truth-telling as the series combines this impulse with fiction: “Treme infuses social criticism with the flexibility of fiction and the immediacy of referentiality” to create “plausibly hypothetical” events and occurrences that “did not happen but should have.”[10] We see this, as Cook articulates it, in the creation of composite characters and events that allow Treme to demonstrate “that fiction can be an important corrective to contributions of TV news to collective memory.”[11]

If there are any weaknesses in Cook’s book, occasionally the examples and ample details of the coverage overwhelm his analysis. This is particularly true in the early section on news coverage. For example, Cook gestures at the ways in which race and class inflected Fox News’ coverage of potential looting by Black citizens stuck in New Orleans whereas whites were referred to as “foragers.”[12] However, it would have been helpful to provide more analysis to explicitly show how Fox News’ coverage reported rumors rooted in histories of racism, constructing panic narratives about Katrina that mobilized and perpetuated violent stereotypes.[13]

Ultimately, Cook makes a valuable contribution to our understanding of the storm and its attendant media coverage: like Treme, memories are “composite and synthetic texts, not facts” and so analyzing Treme, Cook concludes, is also about analyzing our memory of Katrina, a memory constructed through news coverage and later documentary and fiction productions.[14] The stakes for Cook in this project are compelling: understanding how we remember Katrina is crucial, because that memory is shaped and constrained by the news coverage that took place during and after the storm. To understand how we study Katrina, we must examine the material from which our own memories—especially for those of us who were not there—were constructed and how those ideas did and continue to contain our understanding of the storm.

Phoebe Bronstein is the Director of Academic Programs in Sixth College at the University of California, San Diego. She received her PhD in English from the University of Oregon (June 2013) and her book project focuses on intersections of race, gender, television, and the South between 1950 and 1980. Her work has appeared in the peer-reviewed publications Jump Cut, Camera Obscura, and Quarterly Review of Film & Video.