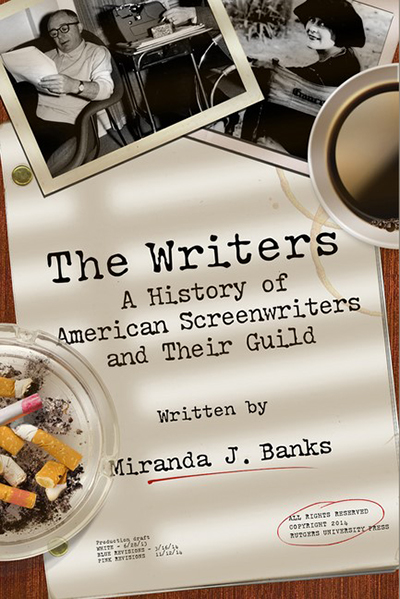 While film consumers can typically rattle off the names of their favorite directors, they are less adept at identifying the scribes of their favorite films. Undoubtedly, industrial, political, and cultural determinants play a significant part in contributing to this void in popular film knowledge. Miranda Banks narrativizes these historical determinants and other factors that contribute to the disesteem borne by scenarists in The Writers: A History of American Screenwriters and Their Guild. Yet, The Writers is in no way a downer; resourceful and illuminating, Banks’ account of the early Depression era efforts to organize and sustain Hollywood’s creative writing labor for nearly eight decades reads as a historical fight to overcome barriers and gain respect within an industry that imagines itself able to function without its scribes.

Through archival research and one-on-one interviews with writers, Banks establishes early on that the nascent stirrings of what is now the Writers Guild of America began in response to cost-cutting measures spurred by the Depression. Characterized by Banks as “a persistent treatment as ‘outsiders on the inside,’”[1] contract screenwriters gathered in 1933 to discuss unionizing and collective bargaining as a protection measure; studio system bosses recoiled, and the battle between labor and management began. Despite the general perception of Hollywood as an economically entitled demographic, injustice is injustice, and Banks makes these politics clear.

Banks’ work centers on core themes such as the professional writer’s struggle for authorship, ownership, and jurisdictional membership. These have been unstable categories throughout the years as the union has had to continually regroup, re-strategize, and reorganize in order to withstand political, technological, and industrial shifts. Banks argues in chapter one that authorship and ownership issues were complicated by the producer-employer’s ability to move writers across projects, creating a sense of working in piecemeal. Credits allow writers to build reputations, thereby influencing future jobs, prestige, and pay; but credits were uncertain because contract labor could be reassigned by management at will. In some instances, writers learned of their credit – or lack thereof – upon viewing the finished film in the theater. Further, that producers considered materials created by contract writers the property of the studios only frustrated writers who considered themselves creative-types and therefore desired ownership of their artistic outputs much in the way novelists and New York playwrights did. Chapter two adds meaning to the concept “what’s in a name” as writers would see their names rise in value when associated with successful films; or, fall when associated with an encroaching communist threat and the industry’s need to distance itself from communist sympathizers, many of whom would become a blemish upon the Guild. The effort to organize working writers emerged alongside increased visibility of domestic communism, with which some of the “Hollywood Ten” blacklisted writers were affiliated or sympathetic. Mobilizing writers not only drew retaliation from studios, but also increased government surveillance, already wary of cinema’s ability to corrupt public morality. Banks outlines how communist sympathizing writers were sacrificed by studio management to the House Un-American Activities Committee as a way of deflecting government attention and preventing larger industry meddling; but Banks suggests that this also allowed studios to dispatch rabblerousing writers, undermining Guild power.

Building membership was and is predicated upon industry expansion and in chapter three, the Guild would confront the first of many jurisdictional challenges with the arrival of television and the needs of those scribes, both east coast and west. Television’s challenge would foreshadow many more as medium-specific needs would emerge with the arrival of each new platform (e.g., DVD extras, streaming, etc.), and would eventually demonstrate generational conflicts as the union aged. The Guild leadership understood that writers were better served standing together across platforms, but bringing writers in at each of these technological iterations reignited tensions threatening the union’s identity and purpose. The success of television drove further distinctions between medium-specific scribes as film production fell off, compelling screenwriters to rethink any privileged notions associated with film.

The battle over the possessory credit (“film by”), counterintuitive to the collaborative nature of filmmaking, reaches new heights in the second half of the century as discussed in chapter four. The presence of hyphenate writer-producers, as both creative labor and management, revealed trust issues during cyclical contract negotiations of the minimum basic agreement. Diversity issues of gender and race emerged in the 1970s, further challenging the Guild’s ability to balance its activist identity with its representational role. Factionalism (e.g., film vs. television, labor rights vs. artistic freedom, etc.) revealed not only struggles for power, but also the continued quest for identity and purpose. Banks provides in-depth discussion of various Guild strikes, some successful, some woefully mishandled, each testing the union’s fabric and the will of its membership, all from which the Guild emerged altered, but still standing. Notable is Banks’ discussion of the contentious 1988 strike, which galvanized producers toward “developing ‘writer proof’ shows, including reality television.”[2] In addition to the need to reaffirm identity and purpose, Banks discusses how scenarists were affected by corporate ownership of studios and production companies in the final chapter. With significant industry changes resultant from deregulation, conglomeratization, and convergence, the Guild once again finds itself questioning its role in advocating for writers frustrated by their artistic tendencies, hired to reproduce “more of the same” profit-driven narratives.

There are moments in The Writers where chronologies are sometimes confusing and do not track neatly across chapters. But Banks is economical in her inclusion of interviews which avoids screenwriter hagiography, foregrounds the book’s media industries and socio-political discourses, and, most importantly, casts the Guild’s complex corpus as the protagonists in her narrative. The Writers offers an insightful historical narrative of resiliency and the fight for respect.

It was the experience of optioning several screenplays that pushed Leah Aldridge into academia. A Ph.D. Candidate in the University of Southern California School of Cinematic Arts, Division of Cinema and Media Studies, Leah's research interests include the circulation of black images, diaspora, and globalization. Leah has a B.A. in English Literature/Creative Writing from USC, an M.F.A. in Screenwriting from University of California, Los Angeles.