The eighth episode of the second season of The Leftovers, “International Assassin” takes place almost entirely in a hotel as Kevin (Justin Theroux) tries to figure out what he must do to leave. I don’t mean leave in a physical sense, I mean metaphysically. The hotel is essentially functioning as a kind of purgatorial space. After the events of the first season - in which Kevin witnessed the death of Patti (Ann Dowd) by her own hand, she has been haunting and taunting him across state lines. Kevin has come to believe that his only chance of getting rid of her involves entering the hotel and killing her spirit there. That The Leftovers devotes an entire episode to Kevin’s experience of the hotel, with its own half-explained internal logic, made it, to me, one of the most thrilling television experiences of last year. Moreover, by imagining a modern hotel as a kind of purgatory, the episode directly invokes The Shining (Stanley Kubrick, 1980), and in doing so, the colonialist history of American resort hotels.

Kevin’s experience inside the hotel is profoundly disorienting. Virgil (Steven Williams), who convinced Kevin to drink the poison necessary to wind up in the hotel, is operating as the concierge. He advises Kevin not to drink the water and tells him how to assassinate Patti. The lobby of the Hotel is relatively unadorned, with a combination of white painted walls, dark wood panels, and chairs. There’s a large white steel staircase in the middle of a large glass atrium. A large wall of glass panels floods the lobby with light. The large windows and the white walls mirror the look of the Colorado Room in The Shining’s Overlook Hotel, but it’s not the look of the hotels that I want to compare. 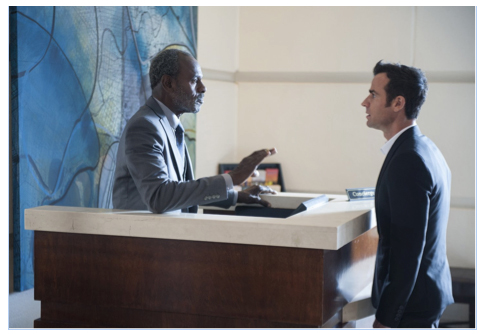 Figure #1. Virgil advises Kevin not to drink the water.

There are theories that the spatial incongruities on display in The Shining - doors in places that don’t make logical or spatial sense, interior sets that clearly don’t match exterior ones - are meant to suggest that things are not alright at the Overlook, a reflection perhaps of Jack’s fragile and deteriorating mental state. But here I want to use screenwriter Todd Alcott’s alternative analysis: the Overlook is big, imposing and disorienting because it’s the Overlook, not Jack, that is the protagonist of The Shining.[1] Narrative films are most commonly built upon answering the question, “what does the protagonist want?,” and Jack, Alcott argues, is too passive to be an interesting protagonist. Instead, thinking about the Overlook as the protagonist positions The Shining’s narrative question is: “Will the Overlook succeed in getting Jack to kill his family?”

The Hotel in The Leftovers, is not the large, isolated, resort hotel of The Shining, but it’s very clear that the Hotel wants things. It may seem strange to argue that the Hotel is the protagonist of this episode, after all, the series up until this point has followed Kevin as a protagonist in a larger ensemble. But in this episode, he is mostly reacting to the ways the Hotel is trying to ensnare him. There are murderous delivery bellhops to defeat and poisoned water to avoid, but the Hotel also hides his ultimate goal. He must kill Patti to return home, but simply shooting Patti doesn’t work. The Hotel has created two Patti’s, the older one Kevin knew, and the largely innocent seven-year-old Patti (Darby Camp), and it’s the younger version he must kill. However, it also seems that Kevin is special, he is able to fight the Hotel in ways that other characters are not able to, and in doing so, extract himself from it. 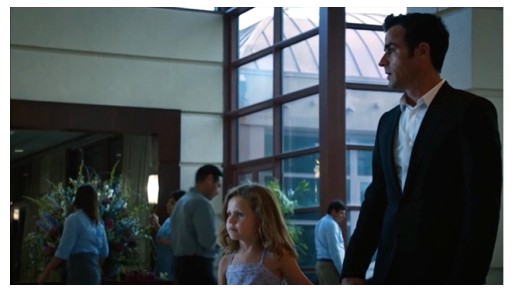 Figure #2: Kevin taking Young Patti out of the Hotel.

Of course, the idea that hotels themselves have agency - as the protagonist or antagonist of a story - might seem farfetched. But I think this can be understood by considering the history of large resort hotels, which intersects with ideas of Manifest Destiny, western tourism and the conquered dead of such endeavors.[2] These resorts stand as silent, ghostly, monuments to the people forced away from the land to build “rustic” pleasure sites. This history of colonization is explicitly invoked in The Shining; perhaps the Overlooks’ desire for familial slaughter is due to the historical displacement of native peoples from the land it sits on. Similarly, the hotel’s colonizing desire in The Leftovers seems to have something to do with the mystical “Departure” the show revolves around; a random event in which two percent of the world's population vanished without a trace. At the beginning of the second season, Kevin moved to Jarden, a town also known as “Miracle,” because it is the only town where none of the townspeople vanished in the Departure. Next to the bridge that leads into the city, a tent city has sprung up of people desperate to colonize the town. The season’s last episode, “I Live Here Now” ends with two things - Kevin dying and returning to the Hotel, and Kevin singing karaoke on his way back to Jarden. He finds that the encampment dwellers have stormed into the city, rioting and partying in the streets. It seems the same colonial violence that made resort hotels possible is being embodied by those denied entrance to Miracle. I hope The Leftovers returns to the Hotel, as I for one would like to know what else the Hotel wants, and how The Leftovers might further the colonial discourses that so interested Kubrick.

Simone Becque is a doctoral candidate in the College of Mass Communication and Media Arts at Southern Illinois University in Carbondale. She is currently working on a dissertation about architectural space and the American television sitcom.