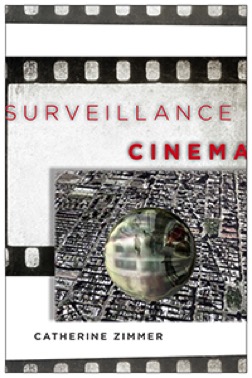 Zimmer brings cinematic surveillance into conversation with voyeurism. However, as Zimmer soon deftly argues, voyeurism critiques do not cleanly map onto surveillance cinema. Surveillance as a mode of looking, Zimmer contends, destabilizes the subject-object relationship where voyeuristic fare solidly maintains it through its situation of unidirectional gaze. The space opened by such a destabilization, she posits, supplies fertile ground for exploring possibilities for resistance. Given that surveillance studies is sometimes plagued by borderline hopeless ruminations on the sheer magnitude of dominant power structures, Zimmer’s fresh argument suggests a tentatively optimistic alternative. The “geopoliticized subject position”[1] offered up by surveillance cinema is watcher and watched. Resistant possibilities, perhaps, lie in the binary’s ambivalences and may create “point[s] of access” to explore the “often failed performances of surveillant power.”[2]

Zimmer begins her exploration with torture films, colloquially tied to the very voyeuristic pornography genre under the moniker “torture porn.” More than offering viewers an opportunity to gawk at abject bodies, torture spectacles like Saw allegedly supply reflections on surveillance as torture. Zimmer shows how torture functions narratively to render certain bodies visible only as tortured bodies. Mapping how such narratives are imbricated in larger structures of power, Zimmer reveals an extra-cinematic logic that positions bodies as knowable subjects only under a camera’s watchful eye. Within these “narrative zones of indistinction,” however, power remains shaky.[3] In the Saw films, for example, video surveillance confuses the narrative and/or plants doubts. The remainder of the chapter tackles race and whiteness vis-à-vis surveillance. Zimmer demonstrates that films like Cache confront disavowed and/or conspicuously absent Middle Eastern subjects through their portrayals of surveillance and violence. The argument concerning surveillance power as limited doesn’t feel as tight here, owing mostly to the fact that the racial others in the films under analysis are wholly annihilated or appropriated and privileged whiteness remains relatively intact.

Chapter Two tackles peer to peer and commodity surveillance. Tying obsession with social media to found footage films, Zimmer keenly points out that films fixated on the process of documenting (e.g. Paranormal Activity) reveal a logic demanding that everything must be tracked and made available for profit. Reality television seems like it needs more attention, although project scope likely necessitates this omission. Zimmer explores how surveillance as structuring logic aesthetic normalizes exploitation of audience labor and insatiable market hunger for “data.”[4] Popular catchphrases like “pics or it didn’t happen” underscore Zimmer’s convincing argument on surveillance as constitutive of subjectivity. The subject is born under the crypto-Cartesian notion that “if it can be sold to you, you exist.”[5] The discouraging ramifications of this concept cast further doubt on the existence of the surveillance machine’s leakages.

In Chapter Three, Zimmer asserts that surveillance amounts to militarized violence. Films featuring protagonists evading big, nefarious techno-gazes exemplify the angst produced by “the form of the global in late capitalism.”[6] The films’ switching the viewer between the protagonist and the surveillance gaze stitches the viewer to a global subject position defined as both looker and looked at, underscoring the ambivalence associated with such reversals. Zimmer discusses how “discourse[s] of privacy protection” erase racial others victimized by surveillance in favor of validating neoliberal subjects whose grievances include how spying will threaten the sanctity of their idyllic bourgeois homes by exposing marital infidelities and whatnot.[7]

It is somewhat surprising, given the attention to both masculinized action films and neoliberal domesticity, that gender recedes from this chapter. Racial otherness, however, receives thorough treatment. Zimmer analyzes the ways in which globalized cinematic surveillance logics construct Middle Eastern spaces as dangerously “unknowable” and thus demanding protocols of visualization.[8] Audiovisual surveillance and military violence collide in the drone, which Zimmer rightly points to as encapsulating the inherently racialized violence.

Time meets surveillance in a “melancholic” manner that Zimmer, in Chapter Four, shows is inextricably linked to surveillance as lacking and/or ambivalent.[9] Loss prevention defines this affect; “pathological investment in a lost object” creates conditions of possibility whereby surveillance is fantasized as a benevolent, omnipotent power capable of preventing past losses.[10] This insightful chapter supplies a psychic backbone to the overarching argument, suggesting possible underpinnings of the will to surveil. Zimmer digs deeper into this collective-psyche aspect of surveillance in Chapter Five, via the film Strange Days. Zimmer argues that cinema, like surveillance, is a “leaky container” better suited to expose surveillance as a “performance” than demonstrate its prowess.[11] This point stands, Zimmer shows, when surveillance technology is turned on systemic power’s apparatuses. Strange Days, which deals with the Rodney King video, “reflect[s] a surveillance culture that is unstable.”[12] The point that surveillance’s weaknesses are most notable in examples demonstrating attempts to harness it as a tool of resistance is a provocative one.

In her conclusion, Zimmer backtracks from her optimism regarding surveillance’s leakages. The conclusion evokes examples ranging from feminized geopolitical surveillance narratives like Zero Dark Thirty and actor George Clooney’s commissioning drones to spy on an African warlord as commentary on paparazzi. These texts, Zimmer contends, further reveal surveillance discourses preoccupied with whiteness and individualism. The feminization of the surveillant subject functions, then, as a pseudo-feminist, almost pandering distraction that offers banal stories of white bourgeois female empowerment instead of robust examinations of geopolitical surveillance and violence against marginalized subjects. Although Surveillance Cinema ends on a more discouraged note than it started on, it nonetheless remains an exciting project that will surely open doors in critical examinations of surveillance, popular culture, and power.

Emanuelle Wessels conducts research in the areas of film and television studies. She teaches Communications courses at Spalding University.