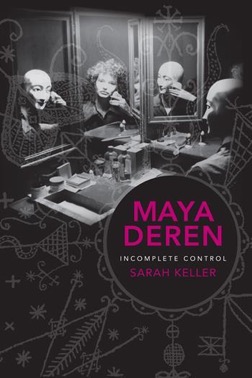 Sarah Keller’s entry in Columbia University Press’s extensive “Film and Culture” series, Maya Deren: Incomplete Control, attempts to re-write and re-interpret Maya Deren’s lofty legacy. Keller’s intervention regarding the enigmatic, experimental filmmaker challenges the assumption that incompleteness equals failure.[1] Throughout the book, Keller identifies Deren’s interests in incompleteness as an artistic strategy, contingency, playing with binaries, possession, trance, and more. These concerns, Keller argues, are manifested and contemplated within all of Deren’s oeuvre, including her unfinished films, which make those works important and not merely incomplete.

In addition to reconsidering Deren’s career, Keller’s book raises compelling questions regarding the art of cinema and cinema studies, though these are secondary to the focus on Deren. Keller identifies a need for the discipline to address incomplete texts, lost objects, and gaps in histories.[2] This is evident when we note that even the most traditional, seemingly “complete” Hollywood film is composed of fragments (individual takes, B-roll), and editing only gives a semblance of something completed. Keller argues that Deren keyed in on this characteristic of cinema long before DVD outtakes, director commentaries, and found footage festivals made film’s inherent incompleteness apparent to all.

In order to grapple with the concept of incompleteness in Maya Deren’s work, Keller employs theories of absence (especially the work of Patrick Fuery) and detailed archival research. Much of the book centers on close readings of Deren’s films, both the complete and well-known, like Meshes of the Afternoon, and the unfinished and rarely seen, such as The Transformations of Medusa. The analyses of the films reveal both the consistency and evolution of Deren’s interests and concerns, which included incompleteness, mythology, ritual, and the relationship between film and reality. Keller consistently grounds the films within their contexts, varied influences, and the overall narrative of Deren’s career.

The book is structured chronologically, with a few exceptions. The Introduction begins ten days after Deren’s untimely death, establishing that the filmmaker left a lot unfinished, from films to unpaid parking tickets. Here Keller details the book’s central questions and arguments, forcefully contending that as an artist, Deren was deeply invested “in the attempt to keep closure at bay for both the works themselves and for her approach to the work more generally.”[3]

Maya Deren: Incomplete Control contains four chapters and a conclusion. Chapter One gives the reader background and interpretations of Deren’s early works, Meshes of the Afternoon, and an incomplete film, Witch’s Cradle. Keller explains the beginnings of Deren’s theories of cinema and her chief goals as an artist – to provide the spectator with an experience of a new reality.[4] Interestingly, Keller makes the case that Deren viewed Meshes as a work in progress (as evidenced by the fact that she commissioned her third husband to write music for it fifteen years later), abandoned for a while, but open for return, rather than a “finished” work.[5] Keller also recoups Witch’s Cradle from its status as a failed attempt, and suggests the film was a moment in which Deren refined “certain principles in her aesthetic.”[6]

Chapter Two covers the period 1943-1946, when Deren made and finished six films, including Ritual in Transfigured Time. Keller plumbs the archives and Deren’s writings to identify a shift in her thinking during this period. At this point, Deren became intent on “maintaining tensions,” not resolving binaries, and “keeping all boundaries open without entirely eschewing them.”[7] Keller makes apparent Deren’s growing interests in Voudoun and her associations with many of the top artists and intellectuals of the day, including Marcel Duchamp and Joseph Campbell.

The first half of the book sets up the premise that incompleteness was integral, even in Deren’s “finished” works, and the final two chapters take on her time in Haiti until her death. Chapter Three delves into the struggles Deren faced, including difficulties raising film production funds, weather, climate, and night shooting in Haiti. Most importantly, Keller paints Deren’s time in Haiti as a period of diverse intellectual productivity, and the months abroad as an open project rather than a quixotic task marred by unrealized ambitions.

Chapter Four deals with Deren’s later work, which was scorned in its day and after. This provides a fascinating look at some of the lesser-known entries in Deren’s filmography like The Very Eye of Night and Season of Strangers. Keller explains their production and some reasons for their abandonment, as well as the ways they furthered Deren’s artistic ambitions and ideas.

Maya Deren: Incomplete Control is recommendable for a number of reasons. It thoroughly investigates the life, work, and creative evolution of one of experimental cinema’s most important filmmakers. The book attempts, and largely succeeds, to review Deren from the lenses of incompleteness and absence theory, forcing a reconsideration of many of Deren’s lesser known films, especially those made in the last part of her career. More broadly, the argument that a film’s incompleteness may be a virtue (or at the very least a subject worthy of contemplation) is convincing. Maya Deren: Incomplete Control would have benefited from a bit more discussion of theories of absence, and a better summary of Fuery in order to more fully flesh out some of the concepts. Additionally, the implications of a full reassessment of film history’s incomplete works are not discussed in detail, leaving the reader to ponder the many benefits and limits of this approach, aside from reclaiming a particular filmmaker.

Nonetheless, for Keller (via Deren), incompleteness means openness, a rejection of strict binaries, and experiences of new realities. Using Keller’s book as a model, one could envision new studies of Orson Welles’s unfinished/studio co-opted work (which Keller briefly discusses), or the film about the Titanic that Hitchcock never got to make, and other, similar interrupted or incomplete film projects. This book is a must-read for scholars of experimental cinema, women filmmakers, and Maya Deren.

Zach Finch is a PhD candidate in English with a concentration in Film, Media and Digital Studies at the University of Wisconsin-Milwaukee. He is the co-editor of 'Directory of World Cinema: Scotland' (Intellect, 2015) with Bob Nowlan.