In Shakespeare’s Hamlet, the hero’s mother marries the uncle who murdered his father in a plot to seize the throne of Denmark. Claudius confronts his stepson, who has turned depressed, and asks him why the “clouds” are hanging on him. Hamlet rebuffs that he is “too much in the sun,” implying that he would prefer to remain the “son” of his real father and a citizen under the “sun,” the true king.

Zin-mi, an eight-year old North Korean and the main character of Vitaly Mansky’s documentary, Under the Sun (2015) is also too much in the sun. The brightest star in this exceptional work is Kim Jong-un who, although not the girl’s relative, exerts a similar effect of political sunburn and paternal usurpation on the young girl. Alas, Zin-mi is not mature enough to have rebellious witticisms readily available; her prospects for nonconformity are zero. She can only cover her eyes when, during a school celebration for Kim Jong-il, the sun shines too brightly on her face. And yet the insignificant gesture comes across as an act of disobedience. 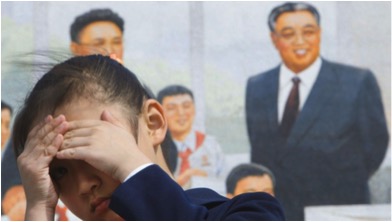 The Korean ruler’s vast state apparatus controls every detail of Zin-mi’s life. So, too, Mansky's documentary: the director had the North Korean government as a production partner. The everyday life of the girl was supposed to showcase North Korea as a socialist paradise. But Minsky manages to keep the camera rolling before and after the official takes. The overwhelming power of the state is introduced gradually in these liminal moments, which turn the film into a scary and sometimes clumsily funny “making of” examination of state propaganda and the cult of personality. In a dinner scene, two apparatchiks in gray trench coats routinely enter the frame to give directional advice such as “laugh louder” or “pretend to be at home,” having the poor family repeat their lines ad nauseam. Everything is staged.

The director has claimed that "[t]hey just don't imagine that there's another kind of life.”[1] When Zin-mi gives a speech to introduce a theater acting out her love for the North Korean leader, her emotions appear to correspond to her performance. But some of the film's shots are more ambiguous. Especially the last shot complicates the idea that Min-zi has adapted to the demands of constant surveillance. Exhausted by the pressure of performing something she is not, she starts crying. Someone in the background, presumably one of the bureaucratic watchmen, asks her to think about something that makes her happy. She replies that she cannot think of anything. But the voice insists until she starts singing a hymn for the "supreme leader." Does this performance speak for the success of political indoctrination? Or is it a demonstration of a politically correct mask?

Foreign media often convey the impression that an excess of the political has succeeded in governing all aspects of public and private life. Recently intellectuals and academics have set out to prove this point. Equipped with tools of media and performance theory, scholars like Heonik Kwon have compared North Korea to a "theater state" which has managed to consolidate the public and private spheres.[2] It appears that performing is so much part of everyday life that the "actors" are no longer capable of knowing when the play is over.

Such observations may be misguided. They fail to understand that foreign filmmakers, journalists or scholars do not represent people of trust for North Koreans. In fact, it seems more likely that their "foreign gaze" sustains the "fourth wall" instead of breaking it. Koreans may act quite differently when they are alone or among people they can trust and when they are in public or with superiors. Longtime observers of North Korea such as the Russian historian Andrei Lankov, who has spent years in the country, has written that "most people's lives remain nearly untouched by high politics."[3] Perhaps, then, not all North Koreans are marionettes in a puppet show. It is more likely that they act highly controlled in the public context, while they may strip off their politically correct masks in more private environments.

It would thus be wrong to suggest that Zin-mi unambiguously believes in the message of the hymn that made her stop crying or that she can't "imagine that there’s another kind of life." Like all children she seeks self-affirmation in other people and has learned how to behave in order to be recognized. If anything, this shows the psychological mechanisms that make young children especially prone to indoctrination. It certainly does not show, however, that people who are indoctrinated are unable to conceive of a political or moral world different from that condition. Her tears testify that her imagination has not yet been completely repressed.

In another, more lighthearted scene, one of Zin-mi's classmates falls asleep during class. It is a special day because a highly decorated war veteran who fought alongside Kim Il-sung visits to tell the students about the heroic deeds of the "Great Sun". The little girl tries hard to keep her eyes open during the monotonous talk, but repeatedly nods off. In Mansky's film, "private acts" such as sadness and boredom contradict with other scenes in the film that give the impression of people's deeply felt respect towards their nation and past leaders.

Mansky's film looks into the "mind" of the Democratic People's Republic of Korea. In rare moments it also achieves a look into the minds of the people. These are the moments when the characters pull off their public face. They grimace, frown, cry, cover their eyes or doze off. More than seeing Min-zi's story as a nation-specific idiosyncrasy, the documentary invites the audience to identify with the young girl's vulnerability first as a child, and then as a citizen of North Korea. The fact of living in North Korea is certainly not decisive for being at the mercy of shadowy authorities.

Moritz Pfeifer studied Philosophy at the Free University of Berlin and Linguistics and Art History at the École des Hautes Études en Science Sociales in Paris. He is the co-founder and co-editor-in-chief of the East European Film Bulletin (eefb.org), an online journal on Central, Eastern and South-Eastern European cinema. He lives in Paris and works and writes for the French, English and German speaking press.