Robert Eggers’ new film, The Witch (2016) might be the greatest American horror film since The Shining. When Caleb (Harvey Scrimshaw), eldest son of a fanatical Puritan whose stubbornness has gotten his family banished, discovers the witch’s hut in the woods, she emerges as a young seductress. The witch (Sarah Stephens) kisses the boy as we watch her hand transform around his neck into that of an old crone’s. This sequence, of course, replicates Jack Torrance’s fantasy in Room 237 in Kubrick’s 1980 film. A beautiful woman (Lia Beldam) turns into a rotting hag (Billie Gibson) while the lust-crazed Torrance (Jack Nicholson) passionately kisses her.

The Witch inverts the patriarchal relationships of The Shining. Kubrick studies the destruction of a normative post-war American family under the weight of patriarchy. Jack carouses with naked women in bathtubs and bristles under the imagined sacrifices he has made to his family. His son (Danny Lloyd) is pre-pubescent, devoted to his mother, Wendy (Shelley Duvall). In the frozen hedge maze at the film’s end, Jack rages at his son, “I’m right behind you, Danny,” literally and symbolically true.

The Shining ends with Jack Torrance frozen in time, impossibly present at a July 4th party at the hotel in 1921. Kubrick’s film is an indictment of the patriarchal mess the nuclear family has become under the yoke of Manifest Destiny. Jack’s murderous rampage is a metonymy for the Indian attacks the builders of the hotel had to repel to construct the resort for rich descendants of white Europeans.

The Witch features Caleb, the teenage boy just slightly older than Danny as the one who sexually engages the succubus. He has begun to see his sister, Thomasin (Anya Taylor-Joy) in a new light, furtively glancing at her developing breasts in the midst of their otherwise normal and loving sibling interactions. Despite this difference, The Witch is telling the same story as The Shining. The patriarch William (Ralph Ineson) has dragged his family from England into the woods of the New World in order to live a devout life honoring God not available in corrupted civilization. Yet regardless of their different reasons—delusional Jack believes he is capable of writing the “Great American Novel”—both fathers sequester their families in the remote American wilderness. Out in unregulated nature, the families are doomed to rip themselves apart.

In Errand into the Wilderness, Perry Miller founded American Studies on the notion that the Puritans were not the totalitarian monsters of Nathaniel Hawthorne’s The Scarlet Letter (1850), but nuanced thinkers engaged in a religious revolution.[1] The Witch methodically dismantles Miller’s argument, which emphasized the Puritans’ respect for private conscience. The Witch pits the town’s leaders, depicted as unyielding as any in Hawthorne, against William, the independent religious thinker. He becomes the sorry avatar of Miller’s revisionist approach to the Puritans. 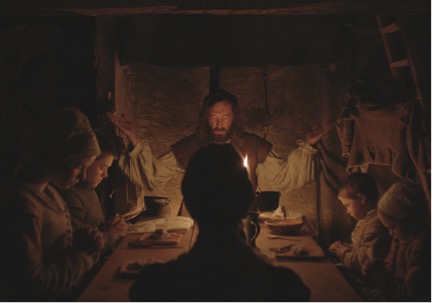 Eggers’ film demonstrates that William has led his family into a fool’s errand. The wilderness, personified by the witch, will carve his family up, one by one, in slasher film style. Indeed, the film’s final girl, Thomasin ends the film triumphant. After being forced to kill her mother with a knife in self-defense, the isolated Thomasin seeks out the coven of witches who await her in the wilderness beyond her family’s farm. The film stakes out its position against Miller, not by rejecting Hawthorne’s hatred of the Puritans, but by doubling down on it.

Nathaniel Hawthorne ends his short story, “Young Goodman Brown”[2] similarly, with the revelation that all of the seemingly godly Puritan townspeople are hypocrites. The young man discovers those he formerly respected, his religious mentors and even his own wife, out in the woods worshipping Satan. The Witch extends this metaphor: the horrifying story we have just witnessed, of William’s rigid religious beliefs consuming his entire family in witch hysteria, is not the isolated experience we thought it was. We come to understand that the very infrastructure of Puritan life has resulted in many girls from other families gathering in the woods.

The ending of The Witch—Thomasin suspended naked amidst the New England treetops—recalls the photograph trapping Jack Torrance at the end of The Shining. Kubrick emphasizes that the story we have just witnessed about Jack destroying his family is at the center of American life, just as true of the 1920s Jazz Age as it is of the 1970s. The Witch similarly binds Nathaniel Hawthorne’s 19th century critique of a flawed America to our present, passing over Perry Miller’s defense of the “New England Mind” as a dangerous fantasy.[3] On a witch hunt of his own, Eggers passionately argues for the exorcism of Puritanism from American social life, and his new film, shockingly his first, succeeds brilliantly.

A long-time member of the editorial board, Walter Metz is the editor of the new monthly film and television reviews feature of Film Criticism. He is a professor in the Department of Cinema and Photography at Southern Illinois University in Carbondale.