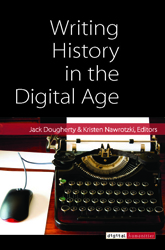 « Prev section
Contributors > About the Authors

Timothy Burke, a professor in the Department of History at Swarthmore College, specializes in modern African history and also works on US popular culture and on computer games. He blogs at Easily Distracted: Culture, Politics, Academia and Other Shiny Objects.

Alex Sayf Cummings is an assistant professor of history at Georgia State University. His book Democracy of Sound: Music Piracy and the Remaking of American Copyright in the Twentieth Century was published by Oxford University Press in 2013. He is a coeditor of the blog Tropics of Meta.

Sherman Dorn is a professor of education at the University of South Florida in Tampa. In addition to his scholarship on education history, he has consistently blogged about scholarship since 2001 and is the former editor of the open-access, online Education Policy Analysis Archives.

Thomas Dublin is a distinguished professor of history at the State University of New York at Binghamton. He is the coauthor (with Walter Licht) of The Face of Decline: The Pennsylvania Anthracite Region in the Twentieth Century.

Ansley T. Erickson is an assistant professor of history and education at Teachers College, Columbia University, and an affiliated faculty member in the Columbia University Department of History. She is completing a book on the history of metropolitan educational inequality.

Nadine Feuerherm is a student in communications studies at Carleton University.

Fred Gibbs is an assistant professor of history at George Mason University and the director of digital scholarship at the Roy Rosenzweig Center for History and New Media.

Shawn Graham is an assistant professor of digital humanities in the Department of History at Carleton University in Ottawa, Canada.

Thomas Harbison is the interim assistant director for educational technology at the Bernard L. Schwartz Communication Institute, Baruch College. He earned his PhD in history from the CUNY Graduate Center.

Jonathan Jarrett is a departmental lecturer in medieval history at the University of Oxford and a career development fellow of the Queen’s College, Oxford. His interests lie in frontiers, documents, and power, all of which he pursues especially in the tenth-century incarnation of what is now Catalonia. He is author of Rulers and Ruled in Frontier Catalonia, 880–1010: Pathways of Power and of various papers and articles, and he blogs at A Corner of Tenth-Century Europe.

Adrea Lawrence is an associate professor in Curriculum and Instruction in the Phyllis J. Washington College of Education and Human Sciences at the University of Montana in Missoula. Her research extends from the policy histories of American Indian education to research methodologies that include historical, ethnographic, and spatial history methods.

Leslie Madsen-Brooks is an assistant professor of history at Boise State University.

Sarah Manekin is currently a National Academy of Education/Spencer Foundation postdoctoral fellow and is on leave from Johns Hopkins University. She received her PhD in history from the University of Pennsylvania in 2009.

Guy Massie is an MA student in the History Department at Carleton University.

Trevor Owens is a digital archivist at the Library of Congress. He also teaches digital history at American University.

Natalia Mehlman Petrzela is an assistant professor of education studies and history at the New School university in New York City. She is currently working on a book entitled Origins of the Culture Wars: Sex, Language, and the Creation of Contemporary Conservatism. She received her PhD in history from Stanford University in 2009.

Stephen Robertson is the Director of the Roy Rosenzweig Center for History and New Media at George Mason University. From 2000 to 2013 he was a member of the Department of History at the University of Sydney. He is currently collaborating with his former Sydney colleagues Shane White and Stephen Garton on “Year of the Riot: Harlem, 1935,” a project that will extend Digital Harlem into the 1930s.

Charlotte D. Rochez is a doctoral student and a supervisor at the Faculty of Education, University of Cambridge, Cambridge, UK. Her PhD research concerns the histories of home education and schooling at home. She is also a senior researcher on a project, Economically Disadvantaged Youth Living at the Fringe of Global Cities, funded by the Commonwealth Centre for Education, Cambridge. She blogs at www.historyofhomebasededucation.blogspot.co.uk.

Oscar Rosales Castañeda is an independent scholar/activist based in Seattle, Washington. He has contributed writing for the Seattle Civil Rights and Labor History Project at the University of Washington and was previously a contributor for HistoryLink.org. Presently he serves as communications director for El Comite Pro-Reforma Migratoria y Justicia Social, a social justice organization based in Seattle.

Lisa Rosner is a professor of history and the director of the Honors Program at Stockton College, New Jersey. She is the author of books and articles on the history of medicine and science, and she has received awards from the National Endowment for the Humanities, the American Philosophical Society, and the Chemical Heritage Foundation.

Amanda Seligman teaches history at the University of Wisconsin–Milwaukee. Her books include Block by Block: Neighborhoods and Public Policy on Chicago’s West Side (Chicago: University of Chicago Press, 2005) and Is Graduate School Really for You? The Whos, Whats, Hows, and Whys of Pursuing a Master’s or PhD (Baltimore: Johns Hopkins University Press, 2012).

Amanda Grace Sikarskie is an assistant professor of public history at Western Michigan University. Prior to coming to Western, Amanda served as project developer and social media manager for the Quilt Index (www.quiltindex.org). She received her PhD in American studies from Michigan State University, where her dissertation research focused on the practice of quilt history in the digital age.

Kathryn Kish Sklar is the Bartle Distinguished Professor of History at the State University of New York at Binghamton. She is currently completing her book Florence Kelley and Progressive Reform, 1899–1932.

Stefan Tanaka is director of the Center for the Humanities, member of the Laboratory for Comparative Human Cognition, and professor of communication at the University of California, San Diego.

John Theibault is director of the South Jersey Center for Digital Humanities at Stockton College. His training is in the history of early modern Europe, about which he has written two books.

Hannah Ueno holds an MFA in graphic design from Washington State University and a BFA in visual communications from the Nihon University College of Art, Tokyo, Japan. She teaches courses in interactive media design, 3D computer graphics, image and typography, and package design at Stockton College.

Luke Waltzer is the director of the Center for Teaching and Learning at Baruch College. He earned his PhD in history from the CUNY Graduate Center.

Ethan Watrall is an assistant professor in the Department of Anthropology and an associate director of Matrix: The Center for Humane Arts, Letters & Social Sciences Online (www.matrix.msu.edu) at Michigan State University. In addition, Ethan is director of the Cultural Heritage Informatics Initiative and the Cultural Heritage Informatics Fieldschool at Michigan State University (http://chi.anthropology.msu.edu/).

Laura Zucconi is an associate professor of history at Stockton College, New Jersey. She has authored a book on medicine and religion in the ancient Near East, in addition to articles on medicine and archaeology, and she has received an award from the National Endowment for the Humanities.