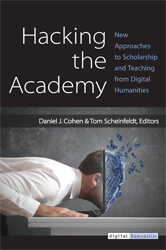 An Open Letter to the Forces of Change

To: The forces of change

So you want to hack the academy? I can’t tell you how to do it. I can ask you a few well-intentioned questions, though, because journalists ask questions. These are a few that have occurred to me as I do what I do: write about academic publishing; go to conferences; talk to scholars, editors, publishers, and librarians; and generally get my feet wet in the fast-flowing, ever-shifting river of scholarly communication. These are questions lobbed at you from the sidelines, not from the trenches. I’m an observer, not a specialist, which may make these useful or may not. Either way, I’m curious to see the results of your experiment.

1) What do you mean by that? Or: beware the language of the oppressor. I keep a running list in my head of phrases I hear so often they no longer mean anything. For instance, can you break down “adding value” for me? If you’re not an employee of NORAD or a grain farmer, do you really need to talk about “silos”? And on and on. Every field has its vocabulary and a rhetoric by which it recognizes itself; every discipline and every trade, including mine, has a shorthand: that’s useful—and limiting. It’s good to keep an eye on when useful has given way to limiting, especially if you’re trying to remake the world. A fresh message requires a fresh vocabulary—or a freshening up of the old one. If you come up with a handy alternative to the phrase “the dissemination of research” please let me know, because I sure could use one.

2) How do you keep crowdsourcing from becoming another in crowd? This is tricky. A revolution does not succeed without like-minded souls, compadres, and comrades-in-arms working together. How do you create alternative forms of authority without creating an alternative regime? Are you opening the gates or shutting them? Storming the barricades or erecting new ones? Will the next generation—or those who feel excluded from the conversation—be tempted to bring out the tumbrels for you?

3) Have you looked for friends in the enemy camp lately? Or: maybe you will find allies where you don’t expect any. As a journalist, I’m no stranger to generalizations. Still, it’s disconcerting to go to different conferences and hear Entire Category X—administrators/university presses/librarians/journal editors/fill in the blank—written off as part of the problem when at least a few daring souls might not mind being part of a solution. It may not be your solution. You might have to venture a closer look to find out. I can’t say what you will discover. It may not be at all what you expect. It might be exactly what you expect. Let me know.

The Trouble with Digital Culture

One of the problems with studying any medium is that it’s too easy to mistake the part for the whole. Literature professors can confidently chart the development of the novel over centuries by referencing only a tiny well-regarded sliver of all novels published—some immensely popular, and others forgotten. When you turn to the broader field of print culture, books jostle against newspapers, advertisements, letters, memos, government and business forms, postcards, sheet music, reproduced images, money, business cards and nameplates, and thousands of other forms that have little if anything to do with the codex book. We tend toward influential, fractional exemplars, partly out of necessity (raised to the level of institutions) and partly out of habit (raised to the level of traditions). Yet trouble inevitably arises when we forget that the underexamined whole exists, or pretend that it doesn’t matter. It always does. If nothing else, the parts that we cut out for special scrutiny draw their significance in no small part by how they relate to the other, subterranean possibilities.

The culture of digital technology, like that of print, is impressively broad, thoroughly differentiated, and ubiquitously integrated into most of our working and nonworking lives. This makes it difficult for media scholars and historians to study, just as it makes it difficult—but inevitable—for scholars to recognize how this technology has changed, is changing, and should continue to change the academy. Self-professed digital humanists—and I consider myself one—generally look at digital culture, then identify themselves and model their practices on only a sliver of the whole.

Digital culture far exceeds the World Wide Web, social networks, e-books, image archives, games, e-mail, and programming codes. It exceeds anything we see on our laptops, phones, or television screens. It even exceeds the programmers, hackers, pirates, clerics, artists, electricians, and engineers who put that code into practice, and the protocols, consoles, and infrastructure that govern and enable their use.

This is important, because digital humanists’ efforts to “hack the academy” most often turn out not to be about replacing an established analog set of practices and institutions with new digital tools and ideas; instead, it’s a battle within digital culture itself: the self-styled “punk” culture of hackers, pirates, coders, and bloggers against the office suite, the management database, the IT purchaser. Twitter vs. the university’s e-mail system. These are also reductions, but potentially instructive ones.

For my own part, I tend to see digital humanism less as a matter of individual or group identity, or the application of digital tools to materials and scholarship in the humanities, but instead as something that is happening, continuing to emerge, develop, and differentiate itself, both inside and outside of the academy, as part of the spread of information and the continual redefinition of our assumptions about how we encounter media, as well as technological and other objects in the world. In this, every aspect of digital technology—whether old or new, establishment or counterestablishment—plays a part.