During the October 2017 meeting of the University of Wisconsin System Board of Regents, the higher education governing body adopted a system-wide policy that sought to discipline students who were exercising their constitutionally-protected right to protest. Specifically, system leadership adopted language stating that students would be suspended if they were found to have twice engaged in violence or other disorderly conduct that disrupts the subjectively-determined free speech of other people. Although, neither “violence” nor “other disorderly conduct” were clearly defined. Further, the policy recommended expulsion as an appropriate punishment for students found to have engaged in the aforementioned activities at least three times. The decision[1] came as a pre-emptive antecedent to legislation first introduced by Republicans and preliminarily debated in the Wisconsin State Assembly during the spring 2017 legislative session. In early 2018, however, the Assembly also passed its legislation. Thus, individual University of Wisconsin campuses became apparatuses for enforcing protest policy violations as primarily determined by supervisory governance structures with competing interests. Most notably, such policies were guided by model legislation drafted and lobbied by the Goldwater Institute (see Kurtz, Manly, & Butcher, 2017), a right-leaning conservative think tank. Goldwater’s interests in free speech, though not explicit, have been to (re)establish a discriminatory precedent in higher education by suppressing and punishing political dissent. Now, in Wisconsin and several other states, the structural overlap of campus, system, and state-level policies are limiting the agency of student activists unfairly targeted for suspension or expulsion.

This paper summarizes pilot-study research undertaken by the Protest Policy Project (PPP), a national postsecondary effort that aims to critically assess, analyze, and counter-legislate policies aimed at punishing students participating in campus protest. In addition to voting, campus protest and activism are considered critical dimensions of student political engagement and participatory democracy (Morgan & Davis, 2019; Rhoads, 1998). The pilot study primarily examined policies related to free speech and student protest within the context of Wisconsin’s legislative entities, which included the Wisconsin State Assembly, University of Wisconsin Board of Regents, and institutions separate from the University of Wisconsin System. More specifically, policies related to university speech codes, and those intended to punish students engaged in organized resistance to the presence of hate speech on campus, were assessed.

Given the (re)consideration of such policies by various state legislatures, higher education systems, and institutional governing bodies, PPP sought foremost to understand how such policies, broadly conceived, initiate and sustain an interlocking suppressive relationship with advocates, activists, and allies for social justice on campus. Analyses were derived from a broader case study and textual analyses (Merriam, 1998; Stake, 1995; Yin, 2002) of system, state, and institutional policy documents (e.g., Wisconsin Assembly Bill 299), free speech policy briefs, news stories (e.g., those published in “The Chronicle of Higher Education” and “Inside Higher Ed”), and semi-structured interviews with student activists within the University of Wisconsin System. The conceptual models that emerged identify how policies aimed at certain types of student protestors (and their tactics of disruption) were developed as well as the policies’ constituencies of potential impact. A critical race analysis was used to identify how the interlocking nature of these policies disproportionately suppressed, criminalized, and punished racially minoritized students engaged in sociopolitical resistance and disruption.

Since 2014, no fewer than nine states, including Wisconsin, have either considered or passed legislation with similar aims. North Carolina’s House Bill 527, also known as the Restore Campus Free Speech Act, which became law due to intentional gubernatorial inaction in early 2017, “establishes a system of disciplinary sanctions for students and anyone else who interferes with the free-speech rights of others.” This law, like others being considered in Arizona, California, Georgia, Illinois, Minnesota, Tennessee, Virginia, and Wyoming (Goldwater Institute, 2018), was primarily based on the Campus Free Speech Act model bill drafted by the Goldwater Institute. Subsequently, the University of North Carolina Board of Governors adopted a campus-based policy in December 2017, in which "students, staff and faculty shall be permitted to assemble and engage in spontaneous expressive activity as long as such activity is lawful and does not materially and substantially disrupt the functioning of the constituent institution” (Restore Campus Free Speech Act, 2017). Substantial disruption was broadly defined as actions already considered disorderly or disruptive under North Carolina state law, which included “protests and demonstrations that materially infringe upon the rights of others to engage in and listen to expressive activity when the expressive activity has been scheduled ... and is located in a nonpublic forum.”

Given this trend of policy efforts that address campus protestors, yet remain largely unconcerned with the very issues about which students are protesting, higher education researchers have an opportunity to provide the necessary historical, political, and social context of which the aforementioned policies are devoid. Although the field of higher education has more recently concerned itself with acts of resistance on campus (Broadhurst & Martin, 2014; Worthington & Rhoads, 2016), a specific focus on policy analysis and legal implications remains overwhelmingly absent. This is especially important given the life-altering implications of such policies for campus activists, most of whom are racially minoritized students.

The data revealed a process for developing and instituting contemporary protest policies that is complex and involves interlocking systems of governance and institutional control. Figure 1 represents the conceptual set of relationships in which think tanks (and other lobbying organizations) may influence policymaking processes in federal and state legislatures and, therefore, within public higher education governing bodies at the state, system, and institutional levels. For example, in the case of contemporary protest policies, the genesis of campus free speech legislation can be attributed to the Goldwater Institute’s model bill that was developed in 2017. According to Goldwater, the model legislation challenges what they frame as a “baleful climate” (Kurtz, Manly, & Butcher, 2017, pp. 4-5) for free speech on campus on several grounds:

First, it creates an official university policy that strongly affirms the importance of free expression, while formally nullifying any existing restrictive speech codes. Second, it establishes a system of disciplinary sanctions for students and others who interfere with the free-speech rights of others, while strongly protecting the due-process rights of those accused of such disruption. Third, it empowers persons whose free-speech rights have been infringed to seek legal recourse and recover court costs and attorney’s fees. Fourth, it ensures that students will be informed of their university’s commitment to free expression, and of the penalties for the violation of others’ free-speech rights, during a special section of freshman orientation. Fifth, it authorizes a special subcommittee of the university governing board to issue a yearly report to the board itself, the public, the governor, and the legislature on the administrative handling of free-speech issues, including the application of disciplinary sanctions. 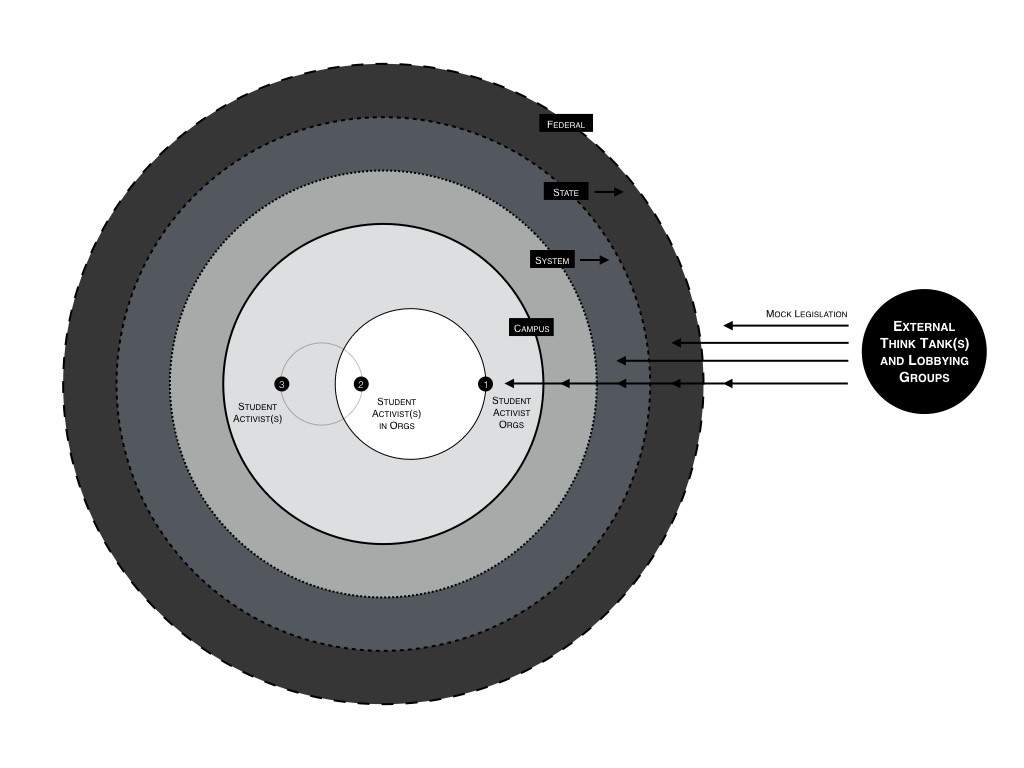 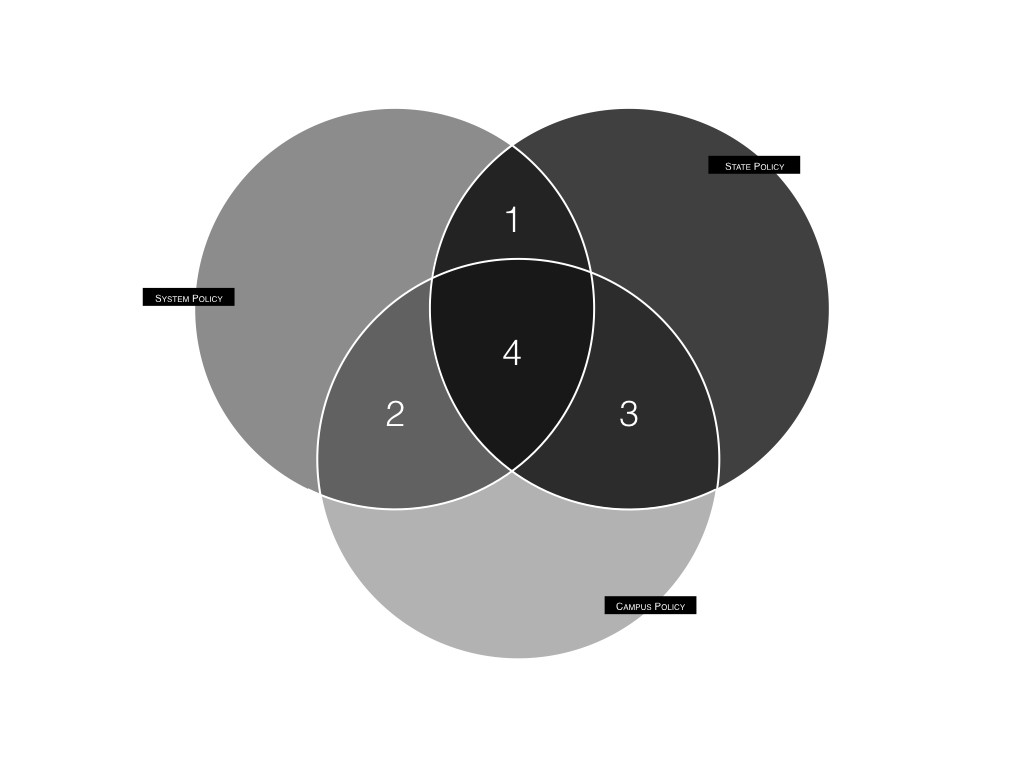 The preliminary NCPPR framework seeks to represent the interrelated nature of nested legislative systems (national, state, and local). The arrows in the model represent the flow of policy ideas, developments, and decisions, sometimes bi-directionally, between legislative systems that may operate concurrently or consecutively. Although federal policy was not explicitly examined, recent indications resulting from presidential rhetoric (Windt, 1986) online and a subsequently signed executive order on free speech made it necessary for the model to account for the role of federal influence on the expansion and adoption of similar policies. At the micro-systemic level, the impact of punitive protest policies were directed at three primary constituencies: 1) student activist organizations, 2) students within activist organizations, and 3) individual student activists not formally affiliated with an organization. In conjunction with Figure 2, these complimentary frames help illuminate the ways in which contemporary protest policies target specific actions and actors engaged in political dissent overlap. These policies further interlock to limit the ability of student activists (and student activist organizations) to take actions of recourse. Thus, students who are under possible adjudication at a particular college or university have little opportunity to work within the higher education governance systems when those systems consistently reinforce a clear position that oppose student activists’ rights to assemble, engage in peaceful (even if disruptive) protest, and exercise their own right(s) to not have their speech surpassed by a governing body or structure (i.e., free speech). Figure 2 specifically conceptualizes four non-hierarchical dimensions of interlocking policy systems in which state, system, and campus/institutional policy converge. Textual analysis revealed the use of shared language, which was consistent with the Goldwater Institute’s mock campus speech/anti-hate speech protest, and codification by each governance level of policymaking. In particular, the narrowing of parameters of acceptability for students engaged in “disruptive” political activity (e.g., events in which invited speakers are disrupted, “shouted down,” or silenced by agitators). Additionally, policies outlined high-stakes punitive consequences for participation in such practices. As policies were found to overlap across hierarchal governance structures in public higher education, findings indicate student activists’ rights to intra-institutional due process, defense, and jurisdictional appeal are likely to be extremely limited and infringed upon, if not completely suppressed.

This study has several implications for policy and practice. First, the rhetoric and ideological positions undergirding policies designed to punish student activists engaged in disruptive protest reinforce institutionalized white supremacy (see Davis, 2017). While the policies themselves do not explicit mention racially minoritized student activists, findings from the Higher Education Research Institute’s annual freshman survey (Eagen, Stolzenberg, Bates, Aragon, Suchard, & Rios-Aguilar, 2015) detail these students are disproportionately likely to participate in protests, whether on campus or beyond. Secondly, a critical race analysis of policies that present as race-neutral reveal that implementation and enforcement routinely subject racially minoritized people to higher levels of scrutiny, applicability, and punishment. Therefore, it is essential for higher education policy makers and practitioners to reframe their understanding of such policies. In particular, administrators should reject the false equivalencies in which the hypothetical, ideological, and philosophical risks associated with the so-called meritocratic debate of ideas in postsecondary institutions, which are racially structured (see Gillborn, 2009, 2014), are considered the same as the material consequences encountered by already vulnerable student populations engaged in sociopolitical resistance.

To be clear, the policymakers and institutional leaders who adopt such policies are engaging in broadly fascist governance practices. The state and its acting agents (i.e., state-governed postsecondary systems and institutions) are attempting not merely to suppress, but also to criminalize the rights of students to contest the presence of anti-Black, anti-Muslim, and anti-immigrant rhetoric and other racist worldviews on-campus. In so doing, they invoke free speech protections to primarily preserve the rights of white nationalist and white supremacist speakers (e.g., Ben Shapiro and Richard Spencer) to engage in “risk-free racism” (Gillborn, 2009). At the campus level, such policies, whether created locally or deferentially to higher jurisdictional powers, come into direct conflict with colleges’ and universities’ espoused commitments to and strategic plans for diversity, equity, and inclusion. In many instances, policies that suppress acts of dissent against the longstanding presence of violent hate speech undermine these commitments by exposing an institution’s “rhetoric of discontinuity” (Grainger, 1974, p. 115; see also Jablonksi, 1979, 1980).