Race and racism are topics that should be discussed in all classrooms. However, some see such topics as outside of the standard curricula that must be aligned to state or national standards. Curriculum standards are a frequent topic in the media, but much coverage depicts them as rigid rather than as a flexible tool that skilled teachers can use to their advantage to justify teaching rich, complex lessons. Research shows that “teachers’ views of standards ... depend on how multidimensional or flexible they perceive the standards to be” (Darling-Hammond & Wise, 1985, p. 317). Furthermore, Avila and Moore (2012) stated that “the crucial aspect is for educators to apply a critical literacy lens to the standards” (p. 32). Thus, if teachers do not see the flexibility the standards provide and are not sure how to read standards with a critical eye—particularly in regards to racial justice—they may stick to “safe” topics, and students may have little opportunities to discuss current events.

This research sought to answer the primary question: How can Missouri teachers align their lessons to state standards while teaching about race and racism in contemporary America? To answer this question, the researchers first conducted a content analysis (Krippendorff, 2012) of the 2017–2018 Missouri Learning Standards (https://dese.mo.gov) for all grade levels and school subjects using a framework of critical race methodology (CRM) (Solórzana & Yosso, 2002). CRM stems from critical race theory (CRT), which focuses on the experiences of people of color and in education “foregrounds and accounts for the role of race and racism ... and works towards the elimination of racism” (Solórzano & Yosso, 2002, p. 24). CRM allows researchers to focus research methods, in our case the content analysis of state standards and a teacher survey, explicitly on race and racism. For the second phase, researchers facilitated a teacher workshop in which participants learned (a) tenets of critical race theory, (b) how the tenets applied to state standards in their grade(s) and content(s), and (c) practiced critical reflection on topics of race both inside and outside of the classroom (using a tool from Pennell & Cain, 2016). Participants completed a reflective survey at the end of the workshop.

Significance for Teachers and Education Researchers

Racial justice is particularly relevant to teachers in Missouri, where the research took place. The state is under national scrutiny due to the violent treatment of African Americans and other people of color by the police. In 2014, the Black Lives Matter movement grew from protests of the killing of Michael Brown in Ferguson, Missouri, by a White police officer. Teachers in Missouri must talk about these topics in their classrooms; however, some hesitate to discuss any topic that might seem “controversial” due to fear of backlash from students, parents, and administrators. This research can help alleviate this stress, as it provides teachers with a means to justify their lessons through content standard alignment. Although the standards analyzed were particular to Missouri, the implications can be applied nationally. Furthermore, this research can offer a model to teacher educators and researchers for training teachers on this issue as all content standards can be viewed and taught through a CRT lens, emphasizing racial justice.

Primary findings related to the content analysis of the Missouri Learning Standards. These findings were then shared with Missouri teachers in a workshop (described above). Participants completed a post-workshop survey, which is analyzed briefly at the end of this section.

We coded the standards for eight CRT elementsracism, institutional power, challenge to dominant ideology, commitment to social justice, experiential knowledge, majoritarian story, transdisciplinary perspective, and counter-narrative (see Tables 1 and 2). We also coded for references to CRT standards that were both explicit and implicit. Standards coded as “explicit” made specific references to race, using words such as “race,” “diversity,” “culture,” or the names of specific racial groups. Standards coded as “implicit” did not directly name race but could still be used to that end. Not counting the CRT elements of racism, majoritarian stories, and institutional power, counseling had the most explicit CRT elements present, followed by social studies and English language arts (ELA). Social studies, ELA, and visual arts standards had the highest amount of implicit, or potential, CRT elements. Commitment to social justice was the most explicitly represented CRT element, largely due to standards in both counseling and social studies. The most implicitly represented CRT element was counter-narrative.

Most standards that potentially aimed at specific learning around race instead used euphemisms such as “diversity,” “diverse,” and “multicultural.” Still, for specific mentions of “diversity” or “culture,” these standards were coded as explicit and often also coded with CRT elements such as counter-narrative, experiential knowledge, and challenge to dominant ideology. For example, physical education’s standard Efficiency of Human Movement and Performance 2A includes, “Show appropriate sportsmanship and sensitivity to diversity and gender issues”; it is interesting that the writers of this standard felt comfortable naming gender as a specific issue but lumped other issues––including, potentially, race––under the term “diversity.” Use of words such as “diversity,” “multicultural,” and “diverse” were often generally concentrated in standards for elementary students, with the exception of courses like music.

Both health and social studies did explicitly use the word “ethnic” on occasion. For example, the health standard Functions and Interrelationships of Systems 2C read, “Analyze ways individuals can respond to the various needs and characteristics of diverse people including those with different abilities, chronic diseases, different ethnic and cultural backgrounds.” Visual arts mentioned “race” once, in the standard AP 1A: “Discuss how people might respond differently to specific American artworks based upon their sub group (e.g., race, gender, attitude toward the environment, business, immigrant group, age, religion, economic status, or level of education).”

Social studies had the highest number of standards with CRT elements of racism, majoritarian stories, and institutional power, followed by visual arts and music. Considering social studies deals largely with American history and government, which is fraught with racism and institutional power, it is logical that its standards would have the highest amount of those three elements. One example of this in Missouri, United States and World History 3aF, includes, “Analyze the cultural interactions among these groups: a. Native Americans, b. immigrants from Europe, c. Africans brought to America.” This standard is racist because it euphemizes “slaves” or “enslaved peoples” with “Africans brought to America.” This euphemization softens the realities of the slave trade.

Some standards present unique opportunities for intentional discussions about race. For example, the world language standard V 3.2b reads, “Interview target-language speakers to gain insights into sociological and cultural issues such as life in France or life in internment camps in the US for Japanese Americans during World War II.” Likewise, visual arts’ standard AP 1A reads, “Discuss how different cultures have different concepts of beauty. Explain how responses (feelings or ideas) to artworks from various cultures are based on both personal experience and group beliefs.”

See Tables 1 and 2 for more details on the coded state standards. It is important to note that a single standard might have been coded with multiple CRT elements rather than just one per standard; however, if a standard was coded with an explicit mention of an element, it would not then be coded with an implicit mention as well. 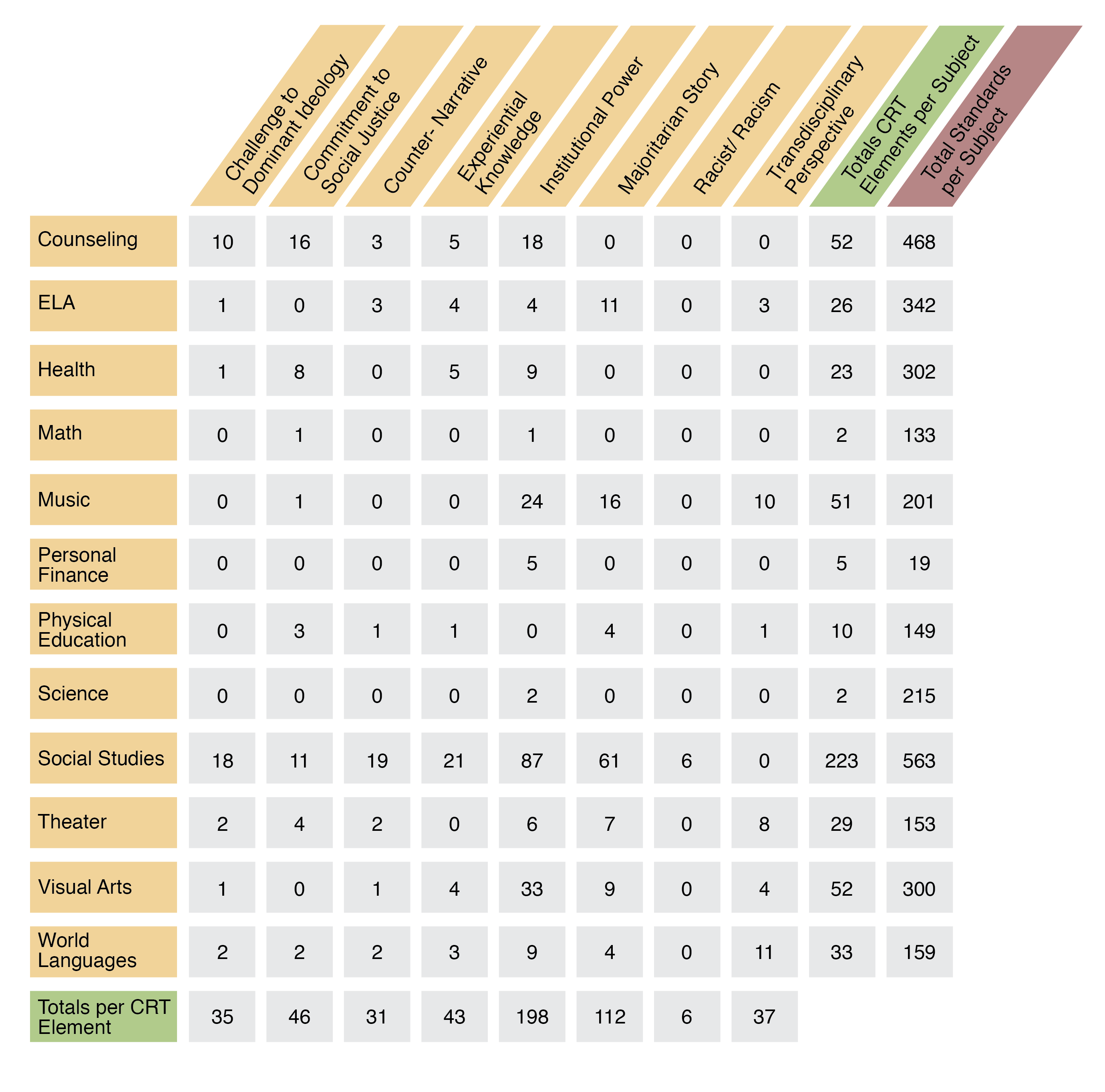 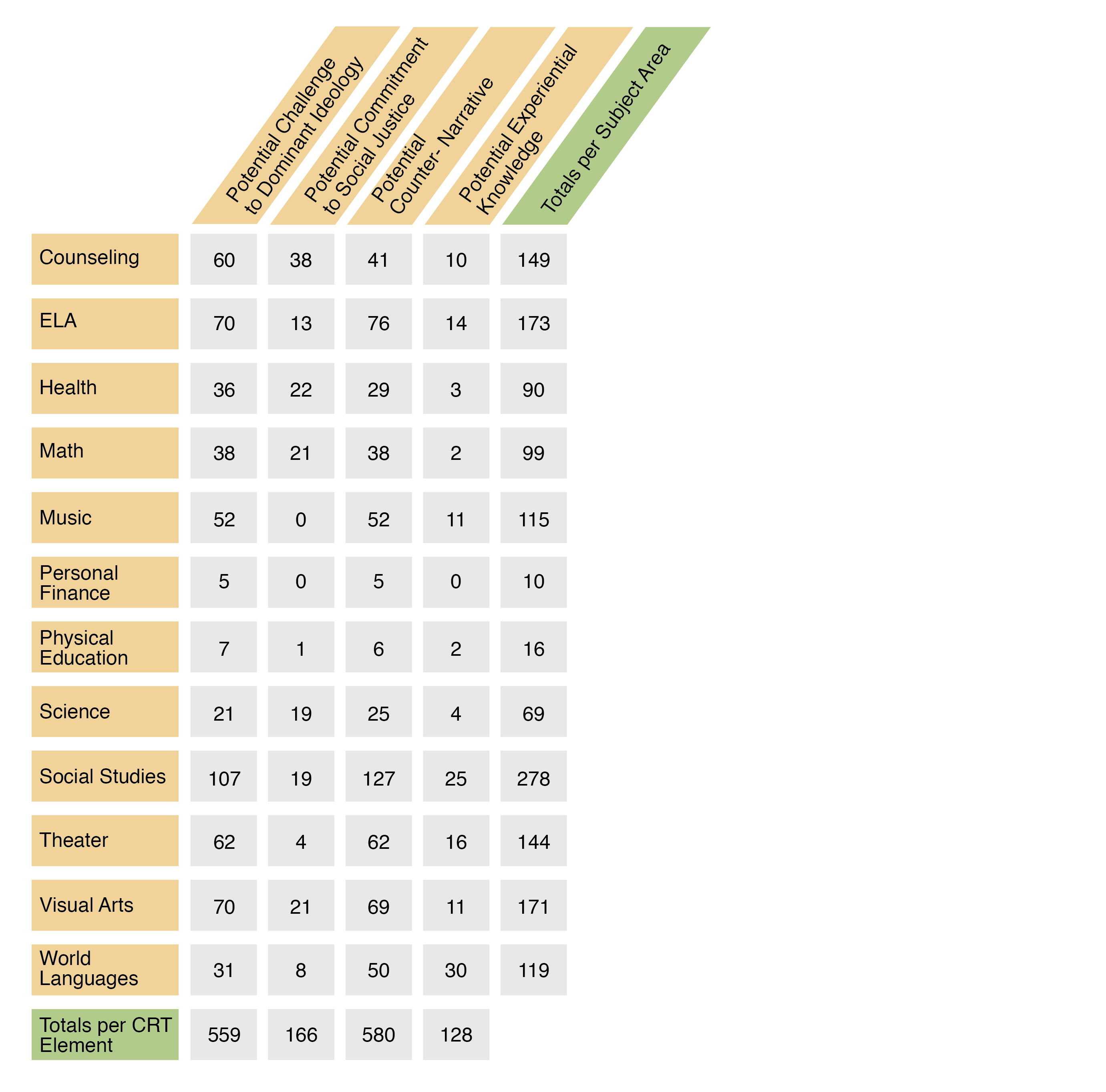 During the teacher workshop, participants were given time to examine selected standards for the grade levels and subjects they taught as well as an introduction to CRT practice reflecting on incidents of racism in schools. In a post-workshop survey, participants indicated they found the time to reflect with like-minded colleagues useful and were ready to re-enter their classrooms energized and better prepared to tackle these conversations with their students. Important for our purposes, participants indicated the workshop “strengthened my ideas on [how to] proactively plan and not just react to current events,” “improved the probability of talking about race in a deeper fashion,” and increased confidence “in being able to connect discussions of race to learning outcomes and standards.”

This study shows that all content areas and grade levels offer rich opportunities for classroom lessons and discussions on racial justice if educators can apply a CRT framework to their application of curriculum standards. This CRT lens allows teachers to not only discuss race and racial justice on the surface level but also examine systemic inequalities that create racial injustice. This can also be empowering for students of color as it allows them to see that the system, not they as individuals, are to blame for difficulties in society. Providing teachers with tools including vocabulary, standards aligned to CRT tenets, and a reflection template also gave them the confidence to begin, or continue, lessons on race in their classrooms with a renewed sense of purpose. Future research can continue to work with teachers on analyzing curriculum standards with critical lenses to approach difficult subject matter.