My work on racial microaggressions emerged from asking Latinx millennials two open-ended questions: Where do you feel you belong? and Where do you feel you least belong? I asked these questions in 2015 to 2016 as part of a larger project on how members of mixed-status families experience belonging and negotiate illegality in their lives. These mixed-status families included members who are U.S. citizens as well as undocumented immigrants with and without the Deferred Actions for Childhood Arrivals (DACA) provisions. Undocumented refers to immigrants without legal authorization to preside in the United States; DACA temporarily allows some undocumented youth access to a work permit, protection from deportation, and other benefits. My two interview questions could have been met with answers about immigration, but instead they mostly inspired young Latinxs to think about the racial politics of space in their communities in Los Angeles County.

Although I interviewed 34 U.S. citizen Latinxs and other members of mixed-status families, here I highlight the experiences of 8 college-going and college-educated undocumented young adults ages 18 to 28. For the most part, young adults were no longer navigating the county of Los Angeles with immigration status in mind. For some, DACA protections provided peace of mind, and California Assembly Bill 60 allows driver’s licenses to immigrants regardless of immigration status. Los Angeles is also a sanctuary city, meaning that local law enforcement does not work with immigration agents to identify, detain, or deport people without legal status. Given this somewhat immigrant-friendly context, young people were not constantly living with the fear of deportation. This does not mean fear entirely leaves the equation, it just means immigrant youth did not have to make the everyday mental calculation about immigration status when moving through Los Angeles.

Many undocumented Latinx millennials in my study had come of age in largely Latinx, immigrant-friendly, homogenous communities. It is in these neighborhoods that young adults reported that they rarely felt like racial or immigrant outsiders. I came to learn that young adults saw predominantly White neighborhoods and public spaces as places where they do not belong, and they felt this way based on their experiences of racial microaggressions in these spaces. Undocumented Latinx millennials experienced racial microaggressions spatially as they moved through Los Angeles and found themselves in predominantly White neighborhoods and public settings, such as restaurants, malls, and retail stores (see Figure 1). 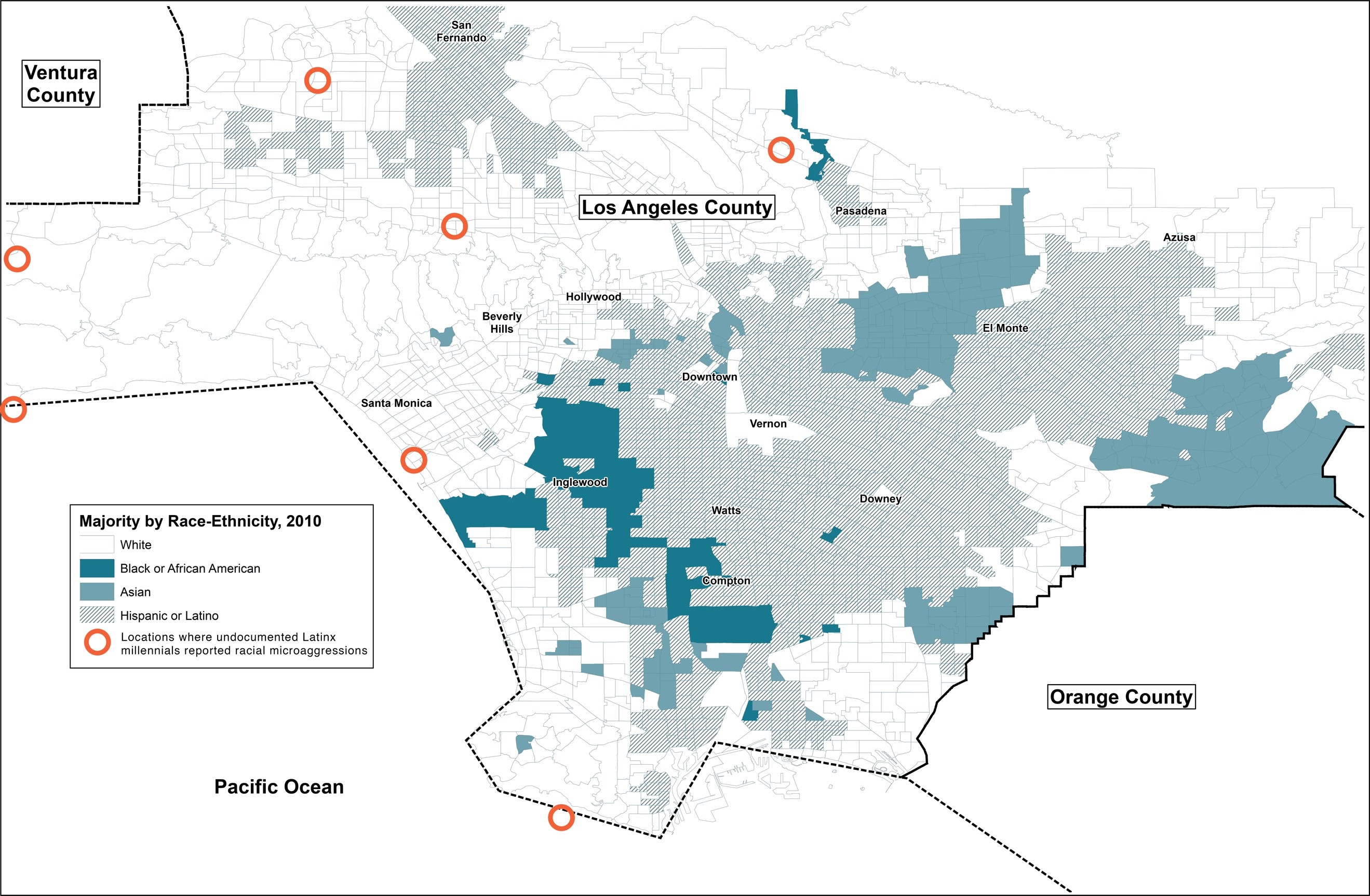 The racial microaggressions in predominantly White neighborhoods ranged from the subtle to the overt. Research participants discussed with me the insidious stares that White strangers directed at them, stares that suggested, why are you here? And worse, you do not belong here. These microaggressions occurred as young adults carried out everyday activities and participated in activities of leisure. One participant, Matthew, for instance, found himself experiencing a racial microaggression at a beachside restaurant while celebrating a one-year anniversary with his girlfriend. As the only Latinx patrons and one of two couples of color present at the busy restaurant, Matthew and his partner felt hostile stares and sneers in this mostly White space.

At times, racial microaggressions were more explicit. In these cases, young adults were told different variations of “go back to Mexico” or “go back to your country.” For undocumented Latinx millennials, these racial microaggressions are particularly unsettling even when Los Angeles provides an immigrant-friendly policy context. These comments were made without knowledge of young people’s immigration status or ethnicity. The verbal assaults were an explicit reminder that these young people were considered unwanted outsiders. It also demonstrates how microaggressions directed at Latinxs implicate a conflation between race and immigration status.

Latinx millennials also recalled racial microaggressions from childhood that were directed at them and their families. A participant in the study, Cecilia, for example, reflects on how 1990s-era public discourse surrounding immigration and welfare reform shaped the microaggressions she and her family faced growing up:

That whole media coverage from the early 90s kind of stuck with some people. You know, that whole typical headline of immigrants taking over and the mom and the dad with all the little kids, the image of the family with the ten little brown kids. I feel like when they see us they kind of think that. ... We would go somewhere and it would be me, my sister, and my brother. It was just the three of us but people would look at us like: here comes the lady with the three kids.

For some millennials, experiences of racial microaggressions in White spaces means avoiding majority-White locales. For others, such experiences sting but do not change where they travel within the city or county. As Xavier, another participant, put it, “I know what I can do and can’t do in this country. I know the rules and the laws so if there is a racist place where they hate Hispanics or something...I would just go in because they can’t do anything to me.” Regardless of their stance, undocumented Latinx millennials often demonstrate incredible resilience in the face of both racism and anti-immigrant sentiment.

I suspect that although my research was completed in Los Angeles, the experiences I have captured are not exclusive to this locale. Recent research by Flores-González (2017) suggests that Latinx millennials in Chicago are also experiencing the racial politics of space in similar ways. Scholars can continue to explore these issues of spatial and racial microaggressions by extending this research to other regions and by including the voices of other millennials of color. As I did here, other researchers might examine how intersecting social identities become more or less salient depending on the spatial and legal context.