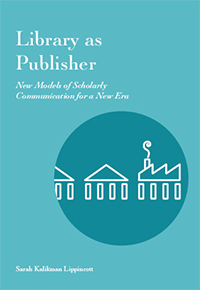 Over the last decade, in response to profound shifts in technology, policy, scholarly practices, and the marketplace, libraries have increasingly adopted the role of publisher. Academic libraries around the world are developing their own portfolios of journals, monographs, and conference proceedings and embracing less-­traditional and less-­formal types of publications, such as data sets, white papers, websites, and undergraduate scholarship. In 2001, Kate Wittenberg argued that this new landscape would require librarians and publishers to “rethink their modes of operation and their role in the cycle of creating and communicating knowledge” (p. 29). Libraries have largely heeded that call, distancing themselves from the role of information warehouse and devising new strategies that position them as active partners in the creation and dissemination of research.

Publishing has emerged as a natural outgrowth of and corollary to libraries’ investment in scholarly communication, digital scholarship, and data management services, among others. Libraries, as information intermediaries, have a unique and advantageous position in this new “information environment” (Wittenberg, 2001, p. 29). They have an intimate knowledge of the information needs and practices of scholars on their campuses, a deep understanding of the scholarly publishing landscape across disciplines, and direct experience with the impact of new technology on both.

Though it has received increasing attention over the last several years, library publishing did not appear out of nowhere. As Okerson and Holzman (2015) note in their enlightening and comprehensive overview of the origins and foundations of library publishing, “Libraries have always published, mainly in modest ways and most often in particular niches (such as catalogs), producing some mighty results” (p. 2). They cite records of libraries publishing printed catalogs of their holdings as early as the 1600s and the fact that “certain major U.S. university presses [such as Cornell University Press] were started from within libraries” (p. 2). More recently, library-­publisher collaborations such as Project Muse, Highwire Press, and Project Euclid, among other initiatives, launched in the early 1990s in response to escalating journal prices and the apparent need for innovation in scholarly publishing models (Thomas, 2006). In a 2001 article, Wittenberg described the Electronic Publishing Initiative at Columbia (EPIC) program at Columbia University, an early, formal library publishing effort that has many of the hallmarks of contemporary initiatives.

Over the past five years, however, library publishing has gained a critical mass within academic libraries and has garnered increasing attention from librarians and publishers alike. The Library Publishing Coalition (LPC), a membership association catering to the distinct needs of library publishers, counts more than 60 members globally and lists more than 115 libraries in its annual Library Publishing Directory. Meanwhile, a 2015 study determined that “one in four university libraries in Australia is publishing original scholarly works in some form (mostly journals)” (Missingham, 2015). Though library publishers still account for a small fraction of published scholarship, they are making notable contributions to the ecosystem. In 2016, for example, the academic libraries inventoried in the Library Publishing Directory published a total of 685 individual journal titles (excluding undergraduate research journals; LPC Directory Committee, 2016), compared with 1,160 individual journal titles published by American university presses (AAUP, 2016), and an estimated 25,000 total scholarly journal titles published annually (Esposito, 2013). Open access (OA) journal publishing is by far the most common activity for library publishers, but many libraries also boast active monograph publishing programs alongside considerable work in publishing gray literature, data, student work, and digital humanities projects.

As this variety of products indicates, library publishing is no mere scale replica of traditional scholarly publishing. Libraries have brought new models to the table—­models inflected with the values and principles of academic librarianship, models designed to fill gaps in the publishing landscape, models designed to leverage the unique skills and positioning of libraries. The LPC identifies three core features that distinguish library publishing from related activities such as digitization programs and simple repository hosting. Library publishing “requires a production process, presents original work not previously made available, and applies a level of certification to the content published (whether through a peer review process or by extension of the library’s institutional brand)” (LPC, 2016). A series of conference proceedings hosted exclusively and for the first time in the library’s repository fits within these parameters. A library of digitized manuscripts does not. Though it may seem arbitrary, maintaining this distinction may help libraries to develop a unique and robust identity for their publishing program, which in turn builds the prestige and reputation that will attract authors and readers.

The fundamental model of library publishing is simple (Fig. 1). In the case of journal publishing, for instance, a faculty member may approach the library with her content, such as an idea for a new journal in her field of expertise. The faculty member provides the disciplinary expertise necessary to identify an audience for the content, to ensure a basic level of quality, and to build a pool of qualified peer reviewers and an editorial board. The librarian or librarians, in turn, provide the technology, skills, and infrastructure for production and dissemination, along with expertise in copyright and licensing, metadata, preservation, and other relevant topics. The library’s existing institutional repository frequently serves as the publication’s home.

Many library publishing initiatives may best be described as publishing services in that they put less emphasis on acquiring, managing, and owning a coherent portfolio of work and more on providing the necessary technologies and support to facilitate content creation and dissemination of all kinds. The library commonly provides a suite of services related to the processes of production, hosting, and distribution, as well as training, guidance, and advising on technology, copyright, peer review, and other relevant topics. The precise roster of services varies widely, often depending on the skills and capacity of the library staff and the specific needs of the faculty and students who take advantage of the service. The most basic level of service requires only that the library make available a publishing platform, such as an institutional repository. However, most library publishers also provide copyright advisory, training (e.g., in the use of software), metadata creation and cataloging, digitization (e.g., for back issues of a journal), hosting of supplemental content (e.g., image collections), analytics (including altmetrics), outreach, and identifiers like ISSNs or DOIs.

Library publishers favor lightweight workflows, often both by preference and by necessity. They focus on digital publication, often dispensing with print entirely. Notably, libraries often eschew services that most other publishers consider integral parts of the enterprise, including notification of abstracting and indexing services, copyediting, typesetting, print on demand, and graphic design (LPC Directory Committee, 2016). It is this emphasis on lightweight, no-­frills workflows that helps keep costs low and gives library publishers their characteristic agility. Digital-­only or digital and print-­on-­demand publishing allows libraries to dispense with expensive print production and distribution services.

Frugal publishing does not mean free publishing, however. Like all publishers, libraries incur considerable costs, the most significant being staff time and the implementation and maintenance of a publishing platform. These costs are often covered through an institutional subsidy, usually from the library’s operating budget—­the pool of money that pays for library staffing, services, and spaces. Institutional subsidies allow libraries considerable freedom to experiment and to take on publications that are unwieldy or unprofitable. It also frees them from worrying about cost recovery. Unsurprisingly, library publishers exhibit an overwhelming preference for OA licensing, with more than 90 percent reporting that their portfolios are mostly or completely OA (Lippincott, 2014).

What forces have contributed to the remarkable proliferation of library publishing in recent years? Should all academic libraries follow suit? What considerations must they bear in mind? This book will introduce the reader to a variety of library-­based publishing initiatives in the United States and Canada to address these and other important questions. Special attention will be paid to defining library publishing as a distinct and complementary subfield of scholarly publishing, describing best practices and considerations for launching a publishing initiative in the library, and positing future directions for the library as publisher. The scope of this book is limited to academic libraries, although public libraries are also exploring new roles as publishers. It also pertains primarily to academic library publishing in North America and to a lesser extent the United Kingdom and Australia. Little published research exists, at least in English, on library publishing in other parts of the world, despite the growing popularity of OA journal publishing in the Global South. This book will be a valuable resource for librarians interested in launching or enhancing a publishing program; library administrators seeking to understand how publishing intersects with a variety of emerging library roles in data curation, digital humanities, OA, and faculty support; and scholarly publishers who want to learn more about how libraries are contributing to the publishing ecosystem.