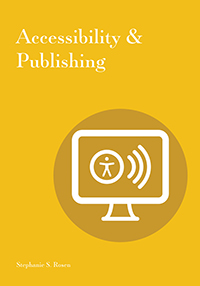 Digital accessibility usually refers to a set of technical, testable standards that come from the field of Web accessibility and are codified in the Web Content Accessibility Guidelines (WCAG) (W3C, 2008, 2018) and related documentation. These standards are both a set of basic principles, broadly applicable to many contexts, and a list of specific rules that are more narrowly applicable to modern digital media and technology. The document moves from general to specific, defining digital accessibility and outlining how it is achieved. For example, one of the four basic principles is “Perceivable: Information and user interface components must be presentable to users in ways they can perceive.” One corresponding rule (of more than seventy-five total rules) is “All non-text content that is presented to the user has a text alternative that serves the equivalent purpose.” Each rule is followed by additional explanation, documentation, examples, and techniques. (This particular rule is best known for requiring that images include “alt text,” though it may be satisfied by various techniques.)

These standards date back to the early Internet and were published in their first version in 1999, drawing from and unifying several independent Web accessibility guidelines that developed in the late 1990s (W3C, 1999). The Guidelines, now in Version 2.1 as of 2018, are managed by an international, independent body of experts, the World Wide Web Consortium (W3C). They have been adopted as an international standard (International Organization for Standardization, 2012) and are used as, or form the basis of, legally required Web accessibility standards in several countries.

These standards have also served as the foundation for other related standards and documentation, including the EPUB accessibility standards. EPUB, the open international standard for electronic books, is managed by the International Digital Publishing Forum (IDPF), which as of 2017 is also under the larger organization of the W3C. The combination of these two organizations, IDPF and W3C, means that the standard for electronic publishing is now aligned with Web standards—and their values of longevity, interoperability, and accessibility. Accessible EPUB, which has its own set of testable standards (International Digital Publishing Forum, 2017), is an example of digital accessibility in action.

The guiding accessibility legislation in the United States is the landmark Americans with Disabilities Act (ADA) (1990). The ADA draws from a civil rights tradition and is ultimately concerned with the equal rights, freedoms, and opportunities of people with disabilities in personal, political, and economic life. Like other civil rights legislation, the ADA responds to and prohibits discrimination in the form of “outright intentional exclusion.” Unlike other civil rights legislation, it also targets the “discriminatory effects of architectural, transportation, and communication barriers” and uses design standards as a proactive means to counter discrimination by design (§ 12101, 1990). In some cases, then, legal accessibility requirements are exactly the same as digital accessibility requirements, since the law uses those standards to define and enforce accessibility. However, in many cases legal accessibility requires “reasonable accommodations” for an individual who has come up against the barriers of “discriminatory” design (Americans with Disabilities Act of 1990).

Accommodations are used as a regular practice of accessibility in many contexts where the ADA applies. In institutions of higher education, for example, when students need access to published materials that are required for learning but inaccessible, the institution must provide an accommodation—often in the form of an accessible electronic version of the published material. Occasionally, institutions fail to make accommodations, and individuals facing discrimination may pursue legal action. Some such lawsuits have made headlines, but most lead quietly to settlements in which the institution agrees to change its procedures in order to ensure accessibility and enable equitable access to its programs and services. For example, in a 2013 settlement between the University of California Berkeley and Disability Rights Advocates which touched on many areas including access to published materials, the university agreed to “provide students with print disabilities … a method by which they may obtain an OCR-scanned digital copy of hard copy printed materials … [that are] made available by the Library to non-disabled students.”

It is important to emphasize that the ADA applies only to some entities. This settlement and the lawsuit it resolved did not include the publishers who produced hard copy printed materials. The U.S. Department of Justice and the Department of Education’s Office of Civil Rights (OCR) (responsible for enforcing the ADA) have not pursued a publisher for the “discriminatory” design of print. This scenario could however come to pass: some U.S. states and Canadian provinces already have laws that require educational publishers to deposit accessible electronic versions of their publications to a central registry or supply them on demand (Office of Civil Rights, 1998; “Accessibility Rules for Publishers,” 2017). Furthermore, the ADA has been interpreted to apply to some online services with similarities to publishers and platforms. Of particular interest is the interpretation in cases against Netflix and Scribd, online-only services in the business of providing access to digital content. Both cases ruled that the businesses were places of public accommodation (i.e., subject to Title III of the ADA) and must make their platforms and content accessible in order to allow equal participation by consumers with disabilities.

Beyond the more narrow definitions of digital and legal accessibility, there is a range of broader meanings attached to accessibility: from ease of use and availability, to economic affordability and rhetorical understandability. While these meanings may appear to span more widely than the specific concerns of readers with print disabilities, they remain connected to the core matter of equitable access, and they certainly affect equitable access for people with disabilities, whose concerns intersect with issues of usability, availability, affordability, and understandability.

Universal design is one approach that explicitly bridges the design needs of people with disabilities and of other groups who tend to be marginalized rather than centered in design considerations (e.g., children and elders, people less familiar with the dominant language, people of atypical size, height, or strength). Digital accessibility standards are influenced by universal design in that both aim to eliminate the need for accommodations by considering and designing for a broad range of needs, abilities, and capacities up front. Universal design as a philosophy also begins to make room for the needs of people who may not claim disability (Linton, 1998) but who nonetheless experience disabilities, or debilities, the effects of which are similar to disability (Puar, 2017).

In reality, the majority of people who stand to benefit from accessibility in publishing may be “outside the reach” of legal accessibility for multiple reasons (Meekosha & Soldatic, 2011, p. 1383). For one, global disability statistics—which estimate one billion people are currently living with disabilities—are based on a metric of functional impairment (WHO & World Bank, 2011). This means that although disability “poses several challenges for measurement,” the measured numbers are inflated in one sense: they represent not only those who identify as disabled but also those who experience impairment (WHO & World Bank, 2011, p. 21). Those who experience impairment but do not identify as disabled may include, for example, the 3.8 million Americans over age sixty-five who have difficulty seeing (Brault, 2012, p. 8). Yet, in many contexts self-identification as a person with a disability is a prerequisite for access to the benefits of legal accessibility, in the form of specialized formats or individual accommodations. For another, global disability statistics show that the majority of people with disabilities are currently living in the Global South—80 percent of people with disabilities (Grech & Soldatic, 2016) and 90 percent of people with blindness and low vision (World Intellectual Property Organization, 2016). In these regions, in spite of the broad ratification of the United Nations Convention on the Rights of Persons with Disabilities (United Nations, n.d.) guaranteeing access to communications, education, and technology (Articles 9, 24, and 21), “the promise on paper for greater accessibility has been incongruent with people’s public experiences” (Pal et al., 2016, para. 1).

Worldwide, the one billion people with disabilities alive right now have few things in common, but one of them is that the majority may see little benefit from accessibility when it operates as an accommodation for the most savvy and well-connected users. However, accessibility as a widely adopted norm of publishing in the digital age and a value that pushes publishing toward greater access for all would certainly benefit this population and many others.