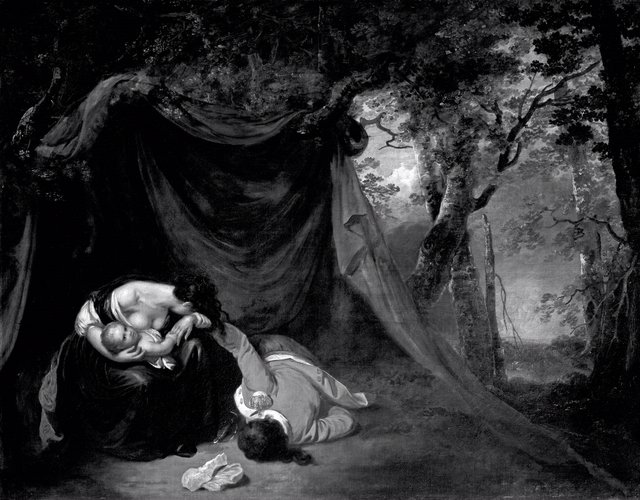 The Museum of Art has recently acquired an important work by the eighteenth-century British painter Joseph Wright, usually known as Joseph Wright of Derby. A canvas much celebrated during the artist’s lifetime, The Dead Soldier resided in private collections for many years and had been untraced until recently. The painting has been principally known through a smaller version painted by Wright that is now in the Fine Arts Museums of San Francisco and through an engraving by James Heath (1757–1834), which was published in May 1797.[1]

Wright began training as a painter under Thomas Hudson, displaying his skills as a portrait painter early. He was the first important British painter to establish his career outside of London, in his native Derby. In addition to portraits, Wright painted contemporary industrial subjects, landscapes, and pictures drawn from literary sources, such as the Miravan Breaking Open the Tomb of His Ancestors of 1772, which was based on an essay in John Gilbert Cooper’s Letters Concerning Taste (see Lock 1999, 544). Miravan was engraved by Valentine Green in the same year; the Museum has an impression of Green’s mezzotint in its collections.[2]

Wright was a significant transitional figure in British painting. As a product of the Enlightenment he was interested in scientific studies and included among his friends Josiah Wedgwood (an important patron of Wright’s) and Erasmus Darwin (father of Charles Darwin). This interest in scientific investigation is a subject Wright made particularly his own. In his painting of a scientist demonstrating the uses of an air pump on a bird, Wright combines his fascination with scientific subjects with one of his best-known skills—depicting both natural and artificial light. A Philosopher Lecturing on the Orrery and An Experiment on a Bird in the Air Pump demonstrated that Wright had absorbed the lessons of Dutch painting and could apply the drama of strongly lit figures in dark interiors of Rembrandt and Gerrit van Honthorst to the emerging subject matter of experimentation offered by the Industrial Revolution. Wright went on to apply his interest in rendering light to his landscape paintings, a trend that was consolidated during his trip to Italy in 1774–1775. The dramatic use of light in depicting both figures and landscape is an important feature of The Dead Soldier.

Considered at the time of its creation to be one of Wright’s most important paintings, The Dead Soldier was shown to great acclaim at the Royal Academy in 1789. It affected viewers with the pathos of its figures, even reducing one of Wright’s friends to tears.[3] Wright once again looked to literature for inspiration, in this instance to a long poem by John Langhorne dating from 1774–1777, The Country Justice. In the first part of the poem, under the title Apology for Vagrants, the following passage occurs (quoted in Rosenblum 1962, 136):

Perhaps on some inhospitable shore
The houseless wretch a widow’d parent bore;
Who, then no more by golden prospects led,
Of the poor Indian begg’d a leafy bed.
Cold on Canadian hills, or Minden’s plain,
Perhaps that parent mourn’d her soldier slain;
Bent o’er her babe, her eye dissolv’d in dew,
The big drops mingling with the milk he drew,
Gave the sad presage of his future years,
The child of misery, baptiz’d in tears!

The poem emphasizes the bleak future of the infant as the mother weeps over her fallen husband, and it is Wright’s delicate interconnections among the three figures, isolated from the continuing military action in the distance by the cloth draped in the trees, that make the sorrowful tone of The Dead Soldier so affecting. What Wright presents us with is not a narrative scene like those found in history painting or a biblical story so much as a vignette or a tableau vivant—an arrested moment captured but not explicitly contextualized.

The scene presented to the viewer shows the three figures at the lower left framed by the drapery behind them. To the right a lush and deep landscape opens up; Wright does not depict the ongoing battle directly, but the glimpses between the trees of a brighter blue sky with clouds at center and the contrasting red of the distant horizon evoke the smoke and fire of a continuing military engagement.[4] The richness of the landscape passage at the right of the painting becomes a foil for the figures at the center of the story. The lyrical and emotive arrangement of arcs comprising the arms, hands, and heads of the three figures creates an oval framing the woman’s breasts and the child’s head. The adults’ faces are turned away from the viewer; the soldier’s body is severely foreshortened as he lies face down, and the mother’s face is turned away in wrenching grief as she grips her husband’s wrist, her hair falling over his arm. The figures come together in the joining of the hands in gestures that are touching and full of pathos. The baby, who is to bear the consequences of this broken family, falls away from his mother’s breast and engages the viewer. The beauty of the lines of the figures and the shallow relief quality of the space in which they are placed give the figures the solemn dignity of a Greek metope, wedding contemporary sentiment with classical form.

Wright’s The Dead Soldier is an important addition to the Museum’s holdings of European painting. Like the Gérard portrait of General Maximilien-Sébastian Foy acquired a few years before, it provides an important view into the complex trends and forces that shaped late eighteenth-century thought and visual culture. Joseph Wright’s important painting of a fallen soldier and his family brings together delicate sensibility, scientific observation, and contemporary literature in a memorable image of the consequences of war.