In the twilight
coming on a day without end
Anna traced the tracks of your tears
& I could see again
the coming of Spring’s hope
in the May flowers
of May Days
long forgotten.
—from Carrie Mae Weems,
Ritual and Revolution, 1998 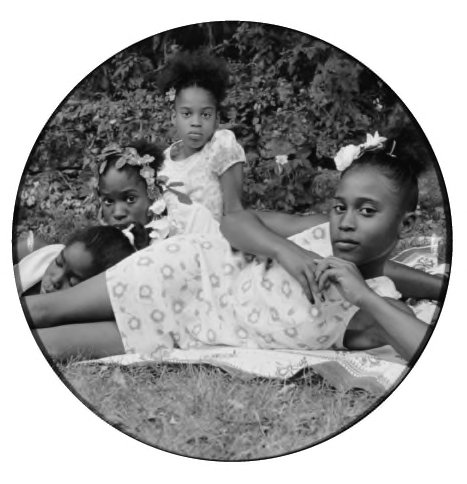 In these closing words to her 1998 installation Ritual and Revolution, American artist Carrie Mae Weems yoked imagery of spring’s ritualistic renewal with May Day celebrations of International Workers’ Day to fulfill the twinned promise of the exhibition’s title. Throughout the gallery space, Weems’s prerecorded voice had recited a prose poem that evokes epochal moments of global history: “I was with you / when you stormed the Bastille & / The Winter Palace. / I was with you / in the hideous mise en scène of the Middle Passage. . . .” The first-person address not only inserts the artist as an “everywoman” witness to these world-changing events but also places the viewer—the shifting referent, “you”—alongside Weems to share in waging revolution, however large or small.

May Days Long Forgotten, the 2002 photographic series that draws on the last lines of Ritual and Revolution for its title, addresses these concerns anew. Yet unlike the earlier installation, which tackled the grand themes of world history, May Days Long Forgotten takes as its topics everyday struggle and power relations, encouraging viewers to believe that “revolution is merely about possibility” (Carr 2003). Focusing her lens on blossoming flowers and four little girls—one of whom the artist claims reminded her of herself—Weems reinvents an outmoded form of photography, the nineteenth-century formal portrait. Favoring soft focus, circular and oval frames, and truncated foreground space, the photographer places these young African-American girls at the center of a narrative that explores the rites of adolescence, middle-class leisure, and tenuous ties to a European cultural past. Due to their scale and formats, the works in this series impart an intimate, precious, and even familial quality, as if they would be quite at home in a late nineteenth-century middle-class parlor, amid porcelain figurines and curios.

Yet the subjects’ skin color belies such a history. In nineteenth-century drawing rooms, dark-skinned women would not have been the subjects of formal photographs but rather would have been subjugated as servants or objects of curiosity. The presentation of these young girls intimates the erased subjects of history and the other, darker side of nineteenth-century bourgeois leisure. In the series title’s multiple allusions—to the revolutionary and socialist upheaval of the workers’ movement now eclipsed by benign celebrations around the maypole, to the 1968 student riots, and even to the civil rights movement—Weems announces that it is time to remember this past. May Days Long Forgotten refigures American and Caribbean history, making visible a facet of African-American life not frequently represented: the middle class. Yet the subjects pictured also suggest personal development and rites; like the flowers that spring from April showers, the young girls captured in May Days Long Forgotten are poised on the cusp of maturity and the concomitant blossoming of self-awareness.

After Manet, a photograph from the series, encapsulates these themes. The work’s title implies both posteriority and influence, and the subjects of the picture address this word play. In its bucolic setting and the arrangement of its central figure, the image alludes to Édouard Manet’s 1863 painting, Déjeuner sur l’herbe, a work that shocked the Parisian Salon for its inclusion of a nude woman lunching amid fully clothed gentlemen. Critical voices at the Salon pointed to the painting’s defiant attitude toward aesthetic conventions: Déjeuner sur l’herbe inserts itself within a history of pastoral scenes, yet it undercuts that same tradition in its lack of allegory to account for the nude figure.

Weems situates the four lounging girls within a similar pastoral theme, devoid of literary or mythological associations. The portrait exudes middle-class leisure—young ladies clad in crisp floral frocks lounging on the lawn—and, on its surface, imparts none of the scandal generated by Manet’s picnic more than a century earlier. The force of Weems’s picture derives from the three girls’ unabashed return of the photographer’s (and viewer’s) gaze. Their expressions convey self-assurance, and they stake their rightful claim to be the central subjects in the pictorial and social history the artist unfurls.

In After Manet, the central figure’s position and visage—casting a bemused, steady, and almost defiant stare—recalls another reclining nude by Manet, the brazen Olympia. In the French artist’s painting of the same name, Olympia offers her body to prospective admirers yet unabashedly returns their lascivious gazes, challenging a long-held tradition of voyeurism in paintings of female nudes. This act of looking back empowers the odalisque and inverts conventional nineteenth-century gender relations; instead of merely occupying the position of an object to be consumed, she assumes a role of agency. Nonetheless, despite Olympia’s (and Manet’s) affront to standard social relations, the racial hierarchy presented confirms the status quo: behind Olympia, a dark-skinned servant proffers a bouquet of fresh flowers.

Weems builds on the artistic and cultural legacy Manet left. In her reworking of the nineteenth-century motif, black subjects play central rather than supporting roles. As in Ritual and Revolution, in After Manet Weems writes a new history, one in which she is conscious of “linking figures to a historical narrative or tradition, and re-examining that tradition by putting in someone who was never there” (Carr 2003). In loosely evoking artistic precedents without exactly copying previous artworks, Weems allows the subjects of her photographs to enact their own narratives, drawing on the past but not doomed simply to repeat it.

Over her twenty-year career, beginning with her student project, Family Pictures and Stories, Weems has interrogated the stereotypes and received ideas that color popular opinions about race, particularly in the United States. In doing so, her work explores issues central to all of humanity, such as political struggles, identity formation, unequal power relations, and representations of class. As an artist who successfully works in the productive interstices between art and politics, Weems affirms the possibility for an individual to effect change: “I want to make things that are beautiful, seductive, formally challenging, and culturally meaningful. I’m also committed to radical social change” (Larsen 1999, 124). After Manet and the larger series of which it is a part, May Days Long Forgotten, contribute to these aims, and like the May days invoked in the title, encourage our collective hopes for celebrating the revolutions of days past and upending the status quo.