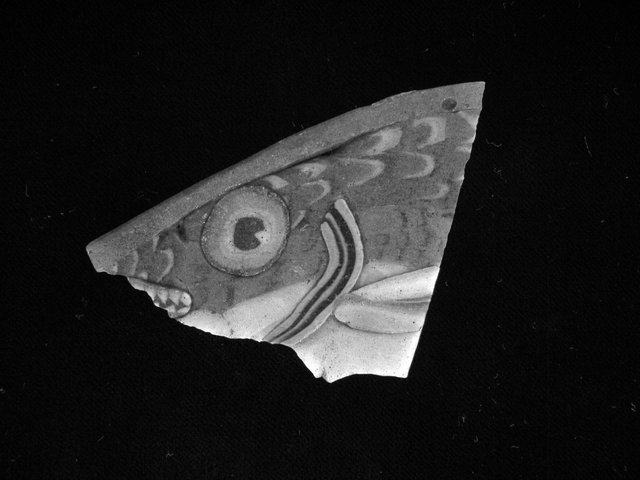 Glass objects are not common features of ancient Egyptian material culture and are exceptionally rare prior to ca. 1500 BCE. The technology of glass-making may have been introduced from Syria-Palestine in the New Kingdom, and the raw materials for glass may have initially been imported (Shaw and Nicholson 1995, 112). During the Ptolemaic and Roman periods glass had become more common in Egypt, and mosaic glass inlays were used to embellish walls and furniture (Root 1982, 17–18). They often depicted traditional pharaonic motifs, such as wedjat eyes and sacred animals, that had earlier been rendered in faience and semiprecious stones (Forman and Quirke 1996, 170). This fish-head inlay typifies the miniature scale and impressive detail of pieces from this period. From the coloring of the body to the elaboration of the sharp, pointed teeth, the artist aimed for a realistic depiction of a particular species of fish. Fish played varied roles in Egyptian iconography throughout time and were not as ubiquitous or constant a symbol as other motifs we see in mosaic work, like the wedjat eye. The lack of provenance and contextual information limits what can be said about this small fragment, but tracing the fish in Egyptian thought and art takes us on a fascinating and circuitous route.

Beginning in the practical sphere of diet, fish were an important source of protein and a staple food for all social classes (Brewer and Friedman 1989; Wilson 1988, 37). Fish may also have played a crucial role in the overall nutritional health of the population as a source of vitamin D, preventing diseases such as rickets that result from a deficiency of this vitamin (Filer 1996, 20). The private Theban tomb of Menna, of the Eighteenth Dynasty, depicts fish as cult offerings, and actual dried fish remains were found in the Eighteenth Dynasty tomb of Nakht.

Fish were not restricted to the realm of food; they played significant roles in religion and mythology (Gamer-Wallert 1970). Fish appear in abundance in tomb scenes throughout the pharaonic period, in roles simultaneously realistic and metaphorical. For the purpose of tracing the iconography of our fish-head inlay, the private tombs of the late Old Kingdom provide the most salient examples. The Sixth Dynasty tomb of Mereruka illustrates fishermen at work in daily life scenes typical of this period. The range of fish species depicted “looks like an encyclopedia of Egyptian ichthyology” (Mysliwiec 2003, 292–293). Also common were scenes of the male tomb owner spearing fish from a papyrus boat, symbolizing both the suppression of chaos and the virility of the hunter.

Fish play a role in one of the most central myths of Egyptian religion: the story of the murder and resurrection of Osiris. Osiris’s brother Seth kills and then dismembers Osiris, scattering his body parts throughout Egypt. Isis, the wife of Osiris, manages to collect all of the body parts except the phallus, which was devoured by a fish, requiring Isis to fashion a false phallus (Meeks and Favard-Meeks 1996, 31). But fish were also the sacred emblem of certain Egyptian provinces of the Nile delta region, and there existed a fish goddess by the name of Hatmehyt, worshipped in the city of Mendes in the Nile delta (Wilkinson 2003, 228–229). She was, however, an obscure goddess whose cult did not extend beyond the local level; of the hundreds of deities in the Egyptian pantheon, she is the only one with whom a fish is associated.

Despite the ambiguous role of fish in mythology, in other contexts they carry distinctly sensual connotations. Gold fish pendants, worn in the hair, are found in the burials of young girls and attached as accessories on statuettes of young girls (Forman and Quirke 1996, 104). A Middle Kingdom tale tells of King Sneferu’s delight in watching the most beautiful ladies of his harem paddle, scantily clad, around his pleasure pond, until one of them drops her fish pendant into the water (Lichtheim 1975, 217). A New Kingdom love poem that evokes lovers in a marsh contains the lines, “Look at my fish, love, how it lies in my hand, how my fingers caress it, slip down its sides . . .” (Foster 2001, 23).

The later periods of Egyptian history, from the Third Intermediate Period (beginning in the tenth century BCE) to the Roman Period (ending in the fourth century CE), are particularly interesting with regard to the status of fish. Our evidence for a taboo against fish comes from these later times, beginning with the Victory Stele of Piye, a Nubian ruler who conquered Egypt in the late eighth century BCE. Piye records that he refused entrance to one of the defeated Egyptian princes of the Nile delta because “they were eaters of fish, which is an abomination to the palace” (Shaw and Nicholson 1995, 281). Classical authors, such as Herodotus and Diodorus Siculus, write of a fish taboo, though the accuracy of their reports is often viewed with skepticism. If such a restriction did exist, it probably stemmed from the negative role of fish in the Osiris myth, and thus the taboo may have applied only to the priesthood and the king (Wilson 1988, 35). It is interesting to note that our only detailed record of the Osiris myth comes from Plutarch, a Greek author of the Roman period (Meeks and Favard-Meeks 1996, 27). Pharaonic references to the story of Osiris are plentiful, but they remained only references; a fully detailed narrative seems not to have been recorded until the Graeco-Roman period. Perhaps it is from this time that certain elements of the story became more elaborated, such as the three species of fish that Plutarch records as having devoured Osiris’s phallus. The new spin on fish in the Graeco-Roman period may have stemmed from such an elaboration of mythology.

Forman, W., and S. Quirke. 1996. Hieroglyphs and the Afterlife in Ancient

Shaw, I., and P. Nicholson. 1995. The Dictionary of Ancient Egypt. London: The British Museum Press.