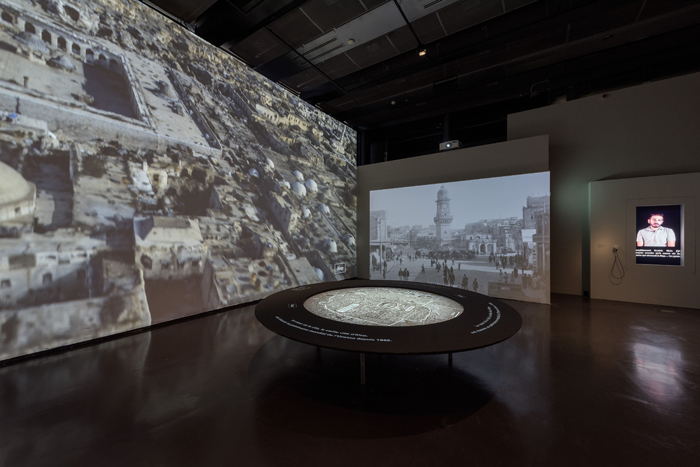 The tragic story that is at the center of this exhibition began in 2014–15, when ISIS occupied parts of Iraq and Syria and broadcasted the destruction of world-famous heritage symbols such as Nineveh and Hatra in Mosul, as well as iconic Palmyra.[1] This quasi-live simulcast of destruction on social media disturbed—if not upset—large parts of the public in Europe and the United States. The carefully staged propaganda developed by the terrorist group focused principally on sites from Antiquity in the conquered cities rather than on Islamic monuments, for the former were seen and perceived in the West as the heritage of Graeco-Roman civilization. Through the international and Western media, the public conversation promptly turned to heritage specialists who assessed the importance and degree of damage caused with regard to the history of humankind. These experts also evaluated and offered solutions for possible restoration and conceivable reconstruction. Furthermore, the shock of those images of destruction, broadcasted live, caused politicians, specialists, and the general public alike to share the feeling that a heinous attack had been perpetuated against the heritage of humankind. The violence of such architectural destruction is certainly part and parcel of the history of monuments and cities across civilizations, but the novelty here was the viewing of systematic and concurrent demolitions, day after day, through the sordid video coverage provided by ISIS. Death and trauma filmed live always have a more profound impact than theoretical threats and images shown a posteriori.

Once the shock and stupefaction passed, politicians and professionals reacted swiftly. On the recommendations of the Louvre Museum’s President-Director Jean-Luc Martinez, and thanks to the diplomatic action of Jack Lang, President of the Institut du monde arabe (IMA) in Paris, French President François Hollande initiated the creation of the international foundation ALIPH (International Alliance for the Protection of Heritage in Conflict Areas).[2] After 2015, in many countries under threat, heritage specialists began to develop new initiatives that consisted of the compilation of old and new data about sites and monuments. In parallel, the communication of this information to the public led museums and heritage professionals to organize exhibitions highlighting the patrimony that recently had been destroyed. On December 14, 2016, the Réunion des musées nationaux inaugurated at the Grand Palais in Paris the exhibition Eternal Sites: From Bamiyan to Palmyra, which was the first exhibition to offer an immersive virtual journey to threatened sites.[3]

In a similar vein, Age Old Cities: A Virtual Journey from Palmyra to Mosul represented a riveting entry among the recent exhibitions devoted to the endangered historical places in the Near East, and the record number of visitors who attended the exhibition testified to its success. The selection of places presented within the exhibition—Mosul, Aleppo, Leptis Magna, and Palmyra, in that order—allowed for a variety of approaches and multiple discourses. Sites representative of the wars and conflicts in Syria and Iraq were illustrated through Palmyra, the destruction of which was broadcast live in 2015, as well as through the cases of the martyr cities of Aleppo and Mosul. The presentation of the Graeco-Roman heritage prized by Western countries and of monuments from the Islamic period (the destruction of which enjoyed far less media coverage) was carefully balanced. The deliberate choice to include the antique site of Leptis Magna in Libya was a statement that, although the site has not suffered major destruction in the recent past, its heritage is still very much under threat considering the unstable political situation in the country. Aurélie Clémente-Ruiz, Director of the Exhibition Department at IMA, regretted the absence of Yemen in the selection. She recognized that the inability to obtain images and plans of Yemeni cities and sites made their virtual reconstruction—an element critical to the exhibition concept—impossible. Indeed, the main goal of the exhibition was to stage a virtual and immersive journey through destroyed places in order not only to spark emotions but also to bring awareness and knowledge of these sites to visitors while they were progressing through the different sections (fig. 1).

While the same principle dictated the experience of the successive sites presented in the exhibition, particular approaches were used for each city. The general staging concept was developed by the architect Sylvain Roca, who conceived of the exhibition as a cinematographic production, thereby associating a film director with a composer. The orchestration of images was based on the extraordinary corpus of digital data collected on the ground by Yves Ubelmann and his team from the start-up firm Iconem. The shots taken by drones were then “digested” and combined with archival images. Thanks to powerful computer algorithms, those composites were transformed into three-dimensional images and virtual reconstructions. Through monumental projections on the walls, this mise en scène provided visitors with the impression of flying over the cities and gradually coming closer to the monuments, to the point of being able to see the details of a carved stone. The feeling of immersion was increased further by augmented reality, which the visitor could experience with a headset thanks to technology developed by Ubisoft, a video-game company. To the impressive images and the original soundtrack, special effects, animated pictures, and even scents associated with the various places were added to create a unique and mesmerizing immersive experience.

In Age Old Cities, visitors discovered the devastation of a ruined Mosul recently liberated from ISIS occupation, and entered the famous Al-Nuri Mosque built by Nur al-Din Zangi in 1170–72. Then they flew over Aleppo’s citadel and penetrated the streets of the medieval city, eventually accessing the Umayyad Mosque. Accounts of inhabitants and interviews with local archaeologists and cultural experts further amplified the already overwhelming emotions felt by the exhibition’s attendees. Arriving at the site of Leptis Magna, which the Romans dubbed the “Rome of Africa,” viewers experienced the sense of eternity inherent to these antique archaeological sites as well as a pause in the sequence of heartbreaking destruction chronicled in the galleries. The journey ended back in Syria in the oasis of Palmyra, present in collective memory as the capital of the third-century Queen Zenobia, and a city at the crossroads of the spice trade. Here visitors could not stop looking at the Temple of Bel and the famous shrine of Baalshamin before and after they were destroyed (with a three-dimensional reconstruction of the latter).

The spectacular achievement of Age Old Cities also lies in the subtle balance attained between the experience of a virtual journey and moments of explanation, the result of several elements cleverly placed in the exhibition. Yet an unexpected feeling may surface at the end of the “movie”: the desire to see the original, to touch the stones, to experience the reality of those sites. Museums and institutions that hold artifacts—and sometimes architectural elements—from the four cities and sites may be able to provide some sense of that reality to those who want to continue the journey. The digital experience offered by Age Old Cities, however, is worth the trip. 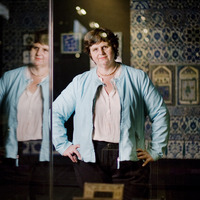 Yannick Lintz, PhD (Sorbonne University), 2010, has been Director of the Islamic Art Department in the Louvre Museum since 2013. Previously she has been known as an art historian of the Middle East, focusing on the transition between Late Antiquity and early Islam, notably through study of the city of Antinoe (Egypt). Her recent efforts have been devoted mainly to museum studies in Islamic art and the history of Islamic art collectors. As a member of the Scientific Committee of the Agence France-Muséums charged with working for the Louvre Abu Dhabi Museum project, Dr. Lintz educated French curators on the idea of a global history museum from the point of view of the Islamic world. She also has created the PAPSI (Projet de recensement des archives scientifiques sur le patrimoine islamique syrien et irakien) program, which aims to safeguard the endangered cultural heritage of Syria and Iraq through a survey of scientific archives. In 2014 at the Louvre, Dr. Lintz curated the exhibition Maroc médieval, which also was shown in the Modern Art Museum Mohamed VI in Rabat in 2015. E-mail: Yannick.Lintz@louvre.fr

Permissions: Copyright to the content of the articles published in the Ars Orientalis remains with the journal. Copyright to the images in the articles published in Ars Orientalis remains with the image rights owners. This article may be copied for use by nonprofit educational institutions, and individual scholars and educators, for scholarly or instructional purposes only, provided that (1) copies are distributed at or below cost, (2) the author, the publisher, and the Journal are identified on the copy, and (3) proper notice of the copyright appears on each copy. For other uses, content permission must be obtained from Ars Orientalis and image permission must be obtained from the rights owners.